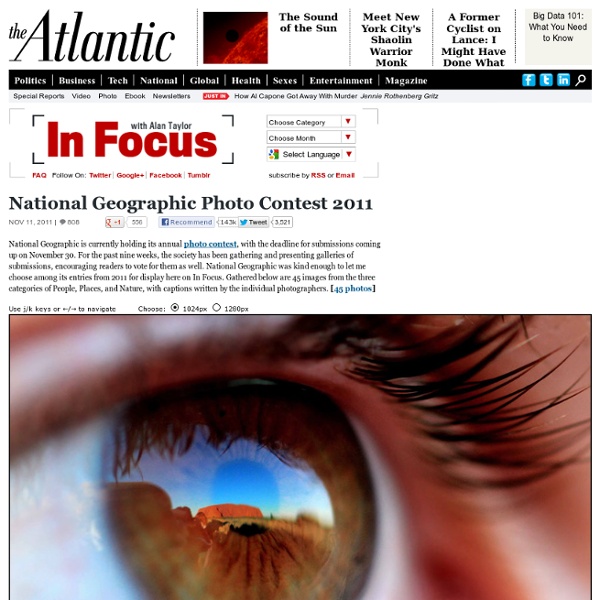 National Geographic is currently holding its annual photo contest, with the deadline for submissions coming up on November 30. For the past nine weeks, the society has been gathering and presenting galleries of submissions, encouraging readers to vote for them as well. National Geographic was kind enough to let me choose among its entries from 2011 for display here on In Focus. Gathered below are 45 images from the three categories of People, Places, and Nature, with captions written by the individual photographers. [45 photos] Use j/k keys or ←/→ to navigate Choose: Many people pilgrimage to Uluru, but what is seen there often depends on where you've come from. Eruption of the Cordon del Caulle. Beluga whales in the arctic having fun. This is a streetcar in New Orleans traveling back towards The Quarter on St. This image captures almost 6 hours of climbing parties on Rainier going for the summit under starry skies. Russia, polar region of West Siberia, Tazovsky Peninsula.

National Geographic Photo Contest 2012, Part II The deadline to enter this year's National Geographic photo contest is coming up -- this Friday, November 30. Back in September, the society started gathering and presenting galleries of submissions, encouraging readers to vote for them as well. Winners will be chosen on or around December 15, 2012. Tips and Tricks for the Architecture Student Some of the best AutoCad commands I use/habits I have, I found out about from someone else, so let’s share some of the really helpful ones. I’ll go first: PL- Whenever possible, I try to use polylines over normal lines. Just cleans everything up a bit. Still easily trimmable and great in fillets. How to Photograph Anything When we launched Learn My Shot, just over 2 years ago, our mission was to create the most comprehensive resource where photographers could learn how to photograph anything. We are still enthusiastically working towards this goal. With the help of contributing photographers we published over 90 creative step by step howto tutorials that answered the most common question: How to photograph…?

Sharpest Views of the Cosmos Ever A close-up of the central region of the Orion nebula, taken with the Schulman Telescope at the Mount Lemmon SkyCenter. Credit: Adam Block/UA SkyCenter) Astronomers have built a new astro-camera that, when fitted onto the largest observatories on Earth, can snap photos of the universe twice as sharp as the famed Hubble Space Telescope. With the newly developed technology, giant telescopes can reach their theoretical limits of resolution in visible light —something that was just not possible, until now, because of atmospheric turbulence causing blurry visible light images. (Related: The Largest Baby Star, Ever?) “It was very exciting to see this new camera make the night sky look sharper than has ever before been possible,” said Laird Close, the project’s principal scientist at the University of Arizona in a press statement.

The Vinyl District Greetings from Laurel Canyon! This morning, the hippies in the canyon are talking about one thing—this groovy date of 11-11-11. Today, when the moon is the the 7th house and Jupiter aligns with Mars. The hope is that peace will guide the planets and love will steer the stars. Yes, today by most accounts is the first day of the Age of Aquarius. Harmony and understanding, Sympathy and trust abounding, No more falsehoods or derisions, Golden living dreams of visions, Mystic crystal revelation, And the mind’s true liberation, Aquarius!

Art & Photography For some people, being human isn't good enough. There are people who are more interested in living in another realm and it's made "possible" thanks to various online games or even apps that allow you to "cartoon yourself" or "zombie yourself". I suppose everyone has day dreams about living in a different time period or [...] This may seem weird but I've often thought about what my "last meal" would be if I knew my time on this earth was running out. Rare and very interesting photos Interesting and very rare photographs, you may never see. The first McDonald’s. Che Guevara and Fidel Castro. Capital of Brazil, on the beginning.

Neon Luminance ‹ From The Lenz Landscapes lit up by glow sticks, lasers, road flares, headlamps, and moonlight. Click Image to view in Full screen. Like a freak midnight rainbow, this ongoing series of lit waterfalls titled Neon Luminance is part of a collaboration between Sean Lenz and Kristoffer Abildgaard over at From the Lenz. The duo dropped high-powered Cyalume glow sticks in a variety of colors into various waterfalls in Northern California and then made exposures varying from 30 seconds to 7 minutes to capture the submerged trails of light as the sticks moved through the current. To accomplish some of the more complicated shots they strung several sticks together at once to create different patterns of illumination. For those of you concerned about pollution, the sticks (which are buoyant) were never opened and were collected at the end of each exposure, thus no toxic goo was mixed into the water.