Achebe: An Image of Africa: Racism in Conrad's "Heart of Darkness" Achebe, Chinua. 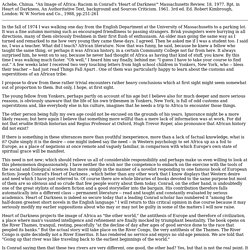 "An Image of Africa: Racism in Conrad's 'Heart of Darkness'" Massachusetts Review. 18. 1977. Rpt. in Heart of Darkness, An Authoritative Text, background and Sources Criticism. 1961. 3rd ed. Ed. Videos. The Nightly Show: Black Fatherhood. Why I’m No Longer Talking to White People About Race by Reni Eddo-Lodge review – ‘racism is a white problem’ The problem of white supremacy is not rocket science. I was losing my temper. 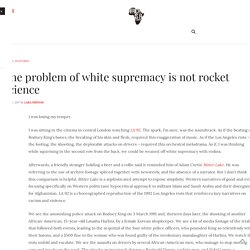 I was sitting in the cinema in central London watching LA 92. The spark, I’m sure, was the soundtrack. As if the beating of Rodney King’s bones, the breaking of his skin and flesh, required this exaggeration of music. As if the Los Angeles riots – the looting, the shooting, the deplorable attacks on drivers – required this orchestral melodrama. Township “Living,” White People and the Limits of “Empathy” If a white family spends a month in a shack, it’s called “brave,” an exercise in “empathy,” and above all, deemed newsworthy enough to gain international coverage. 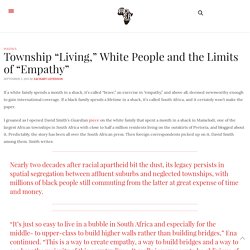 If a black family spends a lifetime in a shack, it’s called South Africa, and it certainly won’t make the paper. I groaned as I opened David Smith’s Guardian piece on the white family that spent a month in a shack in Mamelodi, one of the largest African townships in South Africa with close to half a million residents living on the outskirts of Pretoria, and blogged about it. Predictably, the story has been all over the South African press. Then foreign correspondents picked up on it, David Smith among them.

People of Color Who Never Felt They Were Black. At her small apartment near the National Cathedral in Northwest Washington, Maria Martins quietly watched as an African American friend studied a picture of her mother. 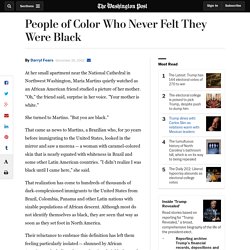 "Oh," the friend said, surprise in her voice. "Your mother is white. " She turned to Martins. "But you are black. " That came as news to Martins, a Brazilian who, for 30 years before immigrating to the United States, looked in the mirror and saw a morena -- a woman with caramel-colored skin that is nearly equated with whiteness in Brazil and some other Latin American countries.

That realization has come to hundreds of thousands of dark-complexioned immigrants to the United States from Brazil, Colombia, Panama and other Latin nations with sizable populations of African descent. The Cost of Being Socialized White. By Thandeka / afrocentricnews.com Most white Americans believe they were born white. 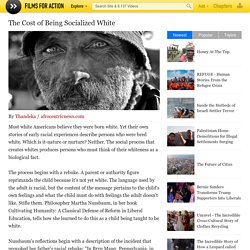 Yet their own stories of early racial experiences describe persons who were bred white. The unbearable whiteness of being. Johannesburg - Hi. 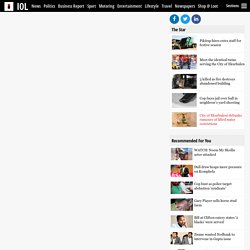 The Nightly Show: Black Fatherhood. Why I call myself a 'coconut' to claim my place in post-apartheid South Africa. Rethinking empirical approaches to racial segregation - Kapoor - 2013 - The Sociological Review. Within empirical approaches to racial residential segregation, there has been a tendency to draw on the work of or influenced by Robert E. 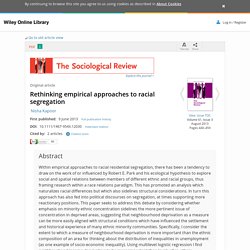 Park and his ecological hypothesis to explore social and spatial relations between members of different ethnic and racial groups, thus framing research within a race relations paradigm. The 2015 ‘F*** WHITES!’-Olympiad. For some coconuts, the quickest way to prove solidarity with black struggles is to express hatred towards white people, says Eusebius McKaiser. 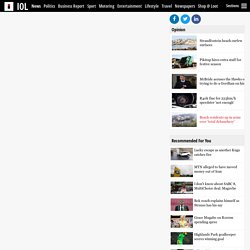 Johannesburg - This past week it dawned on me that some new self-styled radical middle-class blacks think that anti-white hatred, and even hate speech, are the gold standard of one’s commitment to fighting anti-black racism. Coconut (by Kopano Matlwa) The Incredible Whiteness of Technology – Cognitive Dissident – Medium. A friend of mine knowing my own long and storied history with the tech industry asked me why would anyone leave after putting in all that hard work? 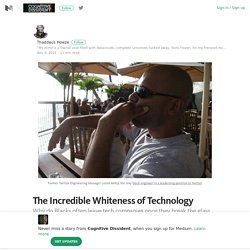 It was a fair question and I had to think only for a second before telling her why. It’s something I have had to deal with working with technology firms for the last 30 years and have decided to get it off my chest. Why do we leave? Because we’re not wanted. The Case for Reparations by Ta-Nehisi Coates. And if thy brother, a Hebrew man, or a Hebrew woman, be sold unto thee, and serve thee six years; then in the seventh year thou shalt let him go free from thee. 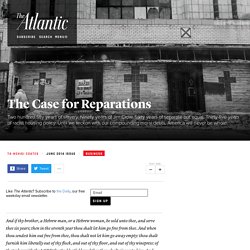 And when thou sendest him out free from thee, thou shalt not let him go away empty: thou shalt furnish him liberally out of thy flock, and out of thy floor, and out of thy winepress: of that wherewith the LORD thy God hath blessed thee thou shalt give unto him. And thou shalt remember that thou wast a bondman in the land of Egypt, and the LORD thy God redeemed thee: therefore I command thee this thing today. — Deuteronomy 15: 12–15 — John Locke, “Second Treatise” Hi, my name is Evita and I'm a racist. Nicki Minaj has something serious to say about race. We should listen to her. @TheSocyCinema - Videos.