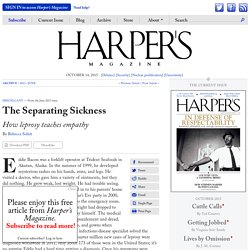 In the summer of 1999, he developed mysterious rashes on his hands, arms, and legs. He visited a doctor, who gave him a variety of ointments, but they did nothing. He grew weak, lost weight. He had trouble seeing. No longer able to earn a living, he moved in to his parents’ house in central California. Episode 27: No Place Like Home (9.25.2015) In the early 90s, a wealthy magazine publisher was convicted of fraud and sentenced to 18 months in a minimum security prison in Louisiana. 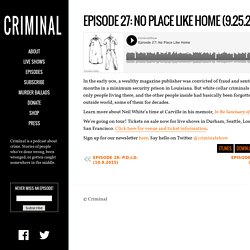 But white collar criminals weren’t the only people living there, and the other people inside had basically been forgotten about by the outside world, some of them for decades. Prison Vendors See Continued Signs of a Captive Market. Is there anything that cannot be turned into a weapon? 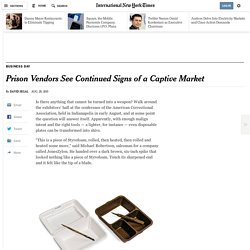 Walk around the exhibitors’ hall at the conference of the American Correctional Association, held in Indianapolis in early August, and at some point the question will answer itself. Attica Prison Riot Demands Reflect Ferguson Commission Calls to Action. “The Attica Prison Move … is a tactical move towards going forward to show the world’s community people how to begin to end oppression and wretched, unjust prison incarceration.” — The Black Panther newspaper, Sept 18, 1971 It took 15 minutes for police to deactivate the Attica prison revolt via blitzkrieg. 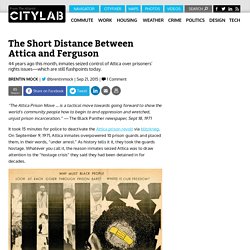 On September 9, 1971, Attica inmates overpowered 10 prison guards and placed them, in their words, “under arrest.” As history tells it it, they took the guards hostage. Traces of Destruction: The Emotional Work of Studying Painful History. I became preoccupied not only with the unaccustomed sense of freedom but also with the paralysing horror that had come over me at various times when confronted with the traces of destruction, reaching far back into the past…–W.G. 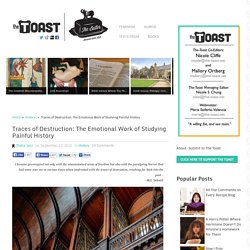 Sebald. Forward Through Ferguson Search Results mental health. The implications of putting the mentally ill behind bars instead of in hospitals. Walking down the concrete halls of a jail or prison in the United States, one out of every five prisoners you see probably has a serious mental illness. 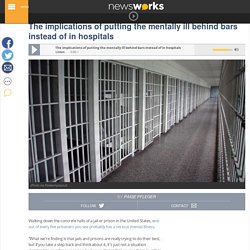 "What we're finding is that jails and prisons are really trying to do their best, but if you take a step back and think about it, it's just not a situation designed to care for someone who has an illness that causes them to either act out, not be able to understand commands, or to be in a situation where there are individuals that may want to victimize them or harm them," says John Snook, the executive director of the Treatment Advocacy Center. Jails or prisons, he says, are the worst places imaginable for people suffering from mental illness. And many of these people wind up in correctional facilities because of the way mental illness is seen by society. "Mental illness should be treated like any other illness, and when someone is struggling they should receive medical care," Snook says. 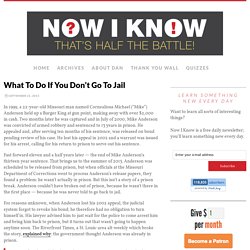 Two months later he was captured and in July of 2000, Mike Anderson was convicted of armed robbery and sentenced to 13 years in prison. He appealed and, after serving ten months of his sentence, was released on bond pending review of his case. He lost his appeal in 2002 and a warrant was issued for his arrest, calling for his return to prison to serve out his sentence. Fast forward eleven and a half years later — the end of Mike Anderson’s thirteen year sentence.

At An Abandoned Philadelphia Prison, All Hell Breaks Loose. Hide caption An actor lurks in the Eastern State Penitentiary rotunda during "Terror Behind The Walls," in Philadelphia. 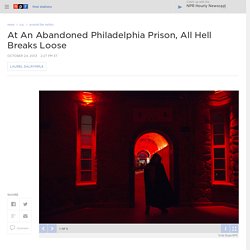 At night, the former prison transforms into America's largest haunted attraction outside of a theme park. Emily Bogle/NPR Hide caption Visitors wander near the entrance to "Terror Behind The Walls. " The penitentiary lay dormant for 20 years until preservationists convinced the city to keep it as a historic site. Emily Bogle/NPR Hide caption Cellblock 14 is closed to tourists to preserve it from further decay. Jen Manion: When White Liberals (and Black Elites) Make Things Worse. A historical perspective on language and the criminalization of African Americans. 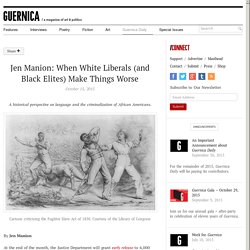 Cartoon criticizing the Fugitive Slave Act of 1850. Courtesy of the Library of Congress By Jen Manion At the end of the month, the Justice Department will grant early release to 6,000 inmates from federal prisons as part of an ongoing effort to ease overcrowding and offer redress to harsh sentencing for drug related offenses. This is the largest one-day release in our country’s history.

Knight. The Vanishing of America’s Historic Mental Asylums. Greystone Park Psychiatric Hospital in 2011 (photograph by Jere Waldron, via Flickr) Between 1848 and 1890, dozens of grand mental asylums were built around the United States under the Kirkbride Plan, designed by Thomas Story Kirkbride. 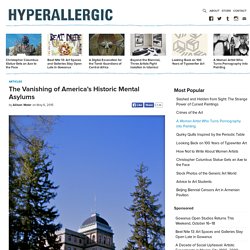 David Stojcevski's horrifying death in jail, explained. During his 17-day stay in jail, 32-year-old David Stojcevski lost 50 pounds, hallucinated, and experienced seizures and convulsions. It was all caught on a security camera that jailers were supposed to regularly watch. But no one helped — and Stojcevski died. Now, the FBI is investigating the death, according to Detroit News. The horrifying death of Stojcevski in the Macomb County, Michigan, jail — first reported by Local 4 — is drawing national attention as the latest example of horrific neglect and brutality by the criminal justice system.

Washington University conference looks at ways to reverse mass incarceration in the U.S. ST. LOUIS • Imagine investing $50 billion a year in a program that only has a 50 percent success rate....