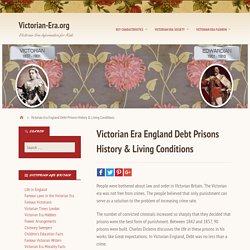 In a nutshell: Debtors’ Prisons. The horror of the jails that imprisoned poor debtors inspired bestselling novel The Devil in the Marshalsea. 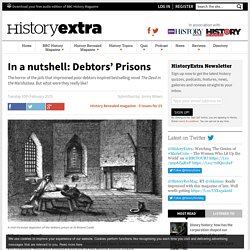 But what were they really like? Tuesday 10th February 2015 Submitted by: Jonny Wilkes A mid-Victorian depiction of the debtors prison at St Briavel Castle What were they? They were institutions in which people who couldn’t pay their debts were incarcerated. When did they originate? The system of throwing people into jail if they couldn’t pay money they owed dates from medieval times. What kinds of people served time in these prisons? Debt was a classless crime. A number of famous names were recorded as inmates in debtors’ prisons, including Robinson Crusoe author Daniel Defoe. What were conditions like in debtors’ prisons?

In general, debtors were treated differently from regular prisoners, being allowed special privileges such as visiting rights. A Victorian prison - source 3. An Overview of Separation and Silence - Victorian Crime and Punishment from E2BN. An Overview of Separation and Silence One of the reforms John Howard suggested in 1777 was that prisoners should have time alone in their own cell to think about their life and crime. 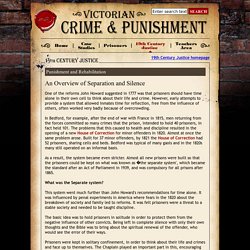 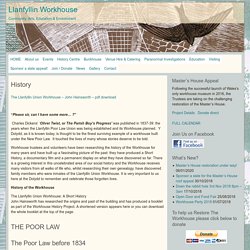 Yes, it’s an original Oliver Twist Workhouse, and the Llanfyllin Dolydd Workhouse is one of the last intact Victorian poorhouses, now a unique venue, it had an interesting and chequered past that touched many lives… Workhouse trustees, led by John Hainsworth have been researching into the history of the Workhouse for many years now and have built up a fascinating picture of the past and produced a booklet and permanent display of some of what they have discovered so far. There is a growing interest in this uncelebrated area of our social history and the Workhouse receives many visitors from all walks of life, who whilst researching their own genealogy, have discovered family members who were one time residents in the Llanfyllin Union Workhouse.

It is very important to us here at the Dolydd to remember and celebrate those forgotten lives. Surveillance - An analysis of Jeremy Bentham Michel Foucault and their present day relevance. Surveillance Moderated surveillance is a feature of modern government. 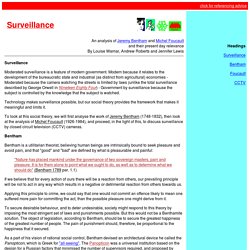 Modern because it relates to the development of the bureaucratic state and industrial (as distinct from agricultural) economies - Moderated because the camera watching the streets is limited by laws (unlike the total surveillance described by George Orwell in Nineteen Eighty Four) - Government by surveillance because the subject is controlled by the knowledge that the subject is watched. Technology makes surveillance possible, but our social theory provides the framework that makes it meaningful and limits it. To look at this social theory, we will first analyse the work of Jeremy Bentham (1748-1832), then look at the analysis of Michel Foucault (1926-1984), and proceed, in the light of this, to discuss surveillance by closed circuit television (CCTV) cameras.

Bentham "Nature has placed mankind under the governance of two sovereign masters, pain and pleasure. The Ninth Dream: A Short Summary of Panoptic Surveillance in Foucault. Heh, here's a brief exegisical summary I wrote for a class a while back. 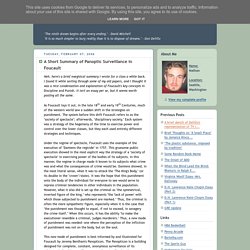 I found it while sorting through some of my old papers, and I thought it was a nice condensation and explanation of Foucault's key concepts in Discipline and Punish. It isn't an essay per se, but It seems worth posting all the same. Foucault and His Panopticon - power, knowledge, Jeremy Bentham, surveillance, smart mobs, protests, cooperation, philosopher. Michel Foucault Above all else, Michel Foucault believed in the freedom of people. 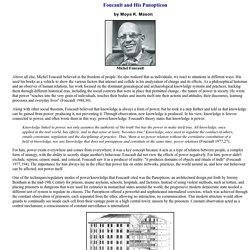 He also realized that as individuals, we react to situations in different ways. His used his books as a vehicle to show the various factors that interact and collide in his analyzation of change and its effects. As a philosophical historian and an observer of human relations, his work focused on the dominant genealogical and archaeological knowledge systems and practices, tracking them through different historical eras, including the social contexts that were in place that permitted change - the nature of power in society.

Panopticon. The panopticon penitentiary, from the Greek παν- ('all') and -οπτικος ('seeing') was based upon an idea of Jeremy's younger brother, Samuel, who while working in Russia for Prince Potemkin, hit upon the 'central inspection principle' which would facilitate the training and supervision of unskilled workers by experienced craftsmen.

Jeremy came to adapt this principle for his proposed prison, an 'Inspection House' envisaged as a circular building, with the prisoners' cells arranged around the outer wall and the central point dominated by an inspection tower. From this building, the prison's inspector could look into the cells at any time—and even be able to speak to the prisoners in their cells via an elaborate network of 'conversation tubes'—though the inmates themselves would never be able to see the inspector himself.