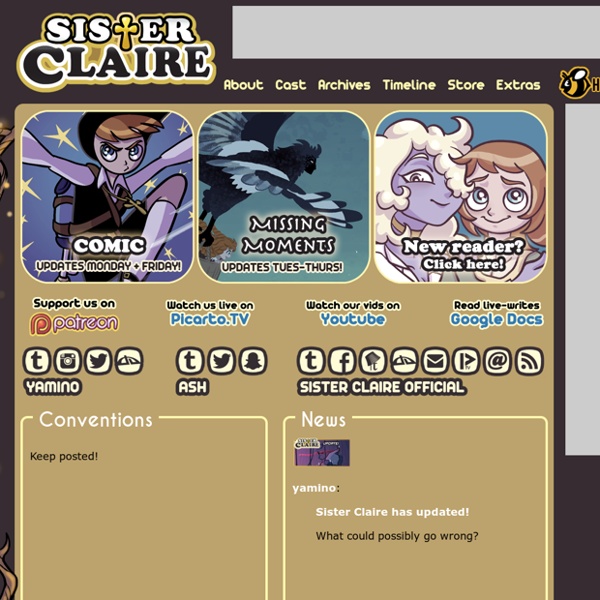 Creative Commons Officially Launches a Search Engine That Indexes 300+ Million Public Domain Images Heads up: Creative Commons has officially launched CC Search, a search engine that indexes over 300 million images from 19 image collections, "including cultural works from museums (the Metropolitan Museum of Art, Cleveland Museum of Art), graphic designs and art works (Behance, DeviantArt), photos from Flickr, and an initial set of CC0 3D designs from Thingiverse." All of the indexed images are in the public domain and released under Creative Commons licenses--meaning the images are generally free to use in a non-commercial setting. Head here to start searching. Would you like to support the mission of Open Culture?

Fantasy Webcomic Comic Graphic Novel It’s finally time to present the submissions placed between the positions 13 and 25 of the Sandra and Woo and Gaia artwork contest. There are some great works of art to be seen here, partially thanks to the extension of the submission period. I would like to thank all artists who have submitted a drawing or other piece of art. Don’t forget to check out the first batch of submissions which I posted on Monday. Please show your support by visiting the artists’ websites and writing a comment in the comment section of this blog post! Tumblr “He who controls the Spice, controls the universe!” And whoever learns to make this awesome Spice-Filled Sandworm Bread will be among the geekiest bakers on Earth and Arrakis alike. The giant sandworms, or Shai-Hulud, of Frank Herbert’s Dune universe are enormous cylindrical creatures, some more than 400 meters long, with huge mouths full of sharp, crystalline teeth. This bread version, created by Chris-Rachael Oseland of Kitchen Overlord, is much, much smaller and has teeth made of almonds. However, based on how Paul Atreides described the breath of the first sandworm he ever encountered, they’re both full of cinnamon.

Tumblr Actually The question I get the most is how I write characters that feel like real people. Generally when I’m designing a human being, I deconstruct them into 7 major categories: 1. a softer world: 123 joey The We Are Become Pals book is here! You can buy it right now, for $16 in hardcover! It is a book that feels nice to read, and feels nice to hold in your hand. Ethical alternatives to Adobe Creative Cloud – switching.social Adobe’s Creative Cloud suite of creative apps is so-called “software as a service”, which means you have to pay rent on it every month or lose access to your work. Adobe gets to set how much the rent is, and once you’re sucked into the system there’s nothing to stop Adobe increasing prices to whatever they want. Alternatively, you could try using free open software that you own completely, with no time limits and no rent payments to make. The free alternatives aren’t an exact match for Creative Cloud’s components, but you can take a look at the list below and see if what is available matches your needs.

SUBNORMALITY! All content copyright Winston Rowntree, 2015. Museum previously seen here and then here. INFP Personality – Conclusion Few personality types are as poetic and kind-hearted as Mediators. Their altruism and vivid imagination allow Mediators to overcome many challenging obstacles, more often than not brightening the lives of those around them. Mediators’ creativity is invaluable in many areas, including their own personal growth. Yet Mediators can be easily tripped up in areas where idealism and altruism are more of a liability than an asset. octopus pie » Archive » #479 – octopus pie theater presents: eve fails at watching porn (again) Here’s a new comic for a new week. I’m very tired from back-to-back weekends of Comic Con and signing mountains of books, but it is a good tired. I think it might be a good idea to get on a reliable weekly schedule for the time being. More on that soon. New Yorkers: I’m doing a book release party for Listen At Home With Octopus Pie at the end of August! I will be reading from the book, signing things, and hopefully meeting you!

Architect Personality (INTJ-A / INTJ-T) “No escape from patterns and systems, no exits. Nothing, and no one, resides outside a system; that’s the way it is.” Armed with a powerful intellect and strategic thinking, Architects can overcome or outmaneuver obstacles that seem unbeatable to most. Their many quirks, such as often unconstrained rationalism, lead to many misunderstandings.