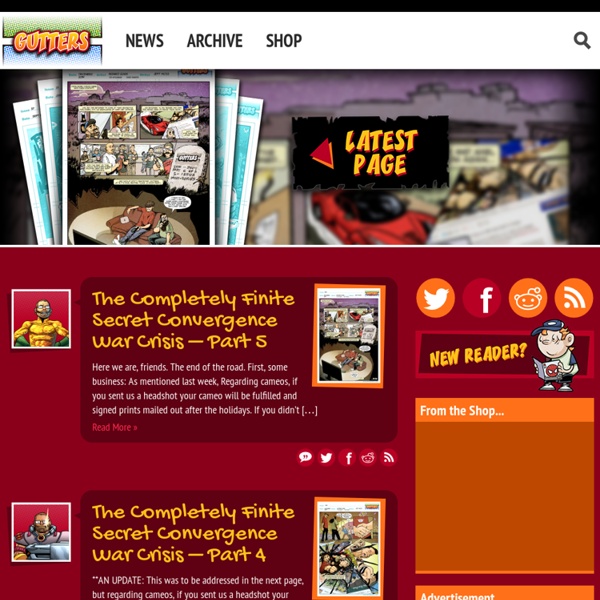 In case you hadn’t heard, Amazon bought Comixology. Welcome to the latest thing that is going to save/destroy the comics industry and will go down in history as the best/worst thing to happen to comics ever. Here’s the thing though, if you are like those lampooned above who decry this as the “Death” of comics or what have you, then you probably haven’t been paying attention closely enough. Have digital comics changed the industry? Absolutely. Have they killed it like so many predicted?

6 Must Read Websites To Go To If You Are A Childhood Fan Of Tintin Comic Books Many in the United States would do a double take. The adventures of Tintin aren’t really popular over there as it is in the rest of the world. Tintin, the boy reporter is an identifiably European hero. But then, if you count Steven Spielberg and The Simpsons among his fans, you can conquer the American continent. For sure, after 21st December of this year (the movie has been released in Europe), the reporter-turned-detective and his trusty dog Snowy will surely gather a larger following. Tintin doesn’t need publicizing because he is right up there in comic book folklore.

[dream*scar] - updates every tuesday and friday Your Online Portal for Movies, TV, Video Games and Unreal Stuff Division of Labor Coming Soon - Stay tuned for a BIG announcement about an awesome project Jorge is working on! PHD Store - Our store was down for a while, but now it is back! Free excerpt from The PHD Movie 2! The Oatmeal HijiNKS ENSUE – A Geek Webcomic - Behind Enemy Lines Fighting Time Lords hoodies are at Sharksplode right now! Wibbly Wobbly Hoodie Warmy! I was a guest on Earwolf’s The Wolf Den Podcast. We talk about the beginnings of HE, The Experiment and making a living doing the thing you love doing. I had a fun time, and I think it was a pretty interesting conversation. Me, Randy Milholland, David Willis, Danielle Corsetto, Jeph Jaques, Rob Denbleyker and MORE will be at the Dragon’s Lair Webcomic Rampage panel/signing event on December 10th and 11th.

ReTales: Dave Pifer, Owner of Secret Headquarters Wednesday, July 23, 2008, by Keri Pina Secret Headquarters owner Dave Pifer <div class="gallery-container"><div class="gallery"><a href=" src=" width="528" height="396" border="0" /></a><br /><a href=" style="font-size: 9px; text-align: center;">Click the image above to view the full photogallery. Intro to Graphic Novels So you think you’ve got the next WATCHMEN percolating in your brain? Itching to bring your very own X-MEN to life? Or maybe there’s simply a RICHIE RICH story burning a hole in your skull. Well then, it’s GRAPHIC NOVEL TIME! Writing graphic novel scripts is very similar to writing TV and Feature scripts, and in many ways, is a fun mash-up of the two styles.

Iron Man Iron Man is a fictional character, a superhero that appears in comic books published by Marvel Comics. The character was created by writer-editor Stan Lee, developed by scripter Larry Lieber, and designed by artists Don Heck and Jack Kirby. He made his first appearance in Tales of Suspense #39 (March 1963). Publication history[edit] Premiere[edit] Iron Man's Marvel Comics premiere in Tales of Suspense #39 was a collaboration among editor and story-plotter Stan Lee, scripter Larry Lieber, story-artist Don Heck, and cover-artist and character-designer Jack Kirby.[2] In 1963, Lee had been toying with the idea of a businessman superhero.[3] He wanted to create the "quintessential capitalist", a character that would go against the spirit of the times and Marvel's readership.[4] Lee said,

Dark Legacy Comics (When you are out of the country and have no Wacom Pad or Photoshop) 1. Obtain a cutout of your favorite character. (Clearly Keydar) 2. 27 Amazing Graphic Novels For Readers New To The Genre So, you want to try comics, but are turned off by the history? You don’t want to memorize 60 years of X-Men characters, or why there have been four different versions of the Legion of Super-Heroes? Luckily, there are a ton of absolutely amazing graphic novels out there, that require no outside knowledge, just an open mind. Here are 27 graphic novels, perfect for someone new to the medium, presented in no particular order. Akiko Akiko is a scifi twist on the classic “Little Nemo” story, and is about the titular girl who gets whisked away to another planet to help its prince.

comics « Failbetter Games Hello there, and welcome to Fallen London Comics. What’s this then? Failbetter is releasing a short, self-contained comic story, two pages at a time, over the course of this week. It’s written by Chris Gardiner and illustrated by me, Paul Arendt.