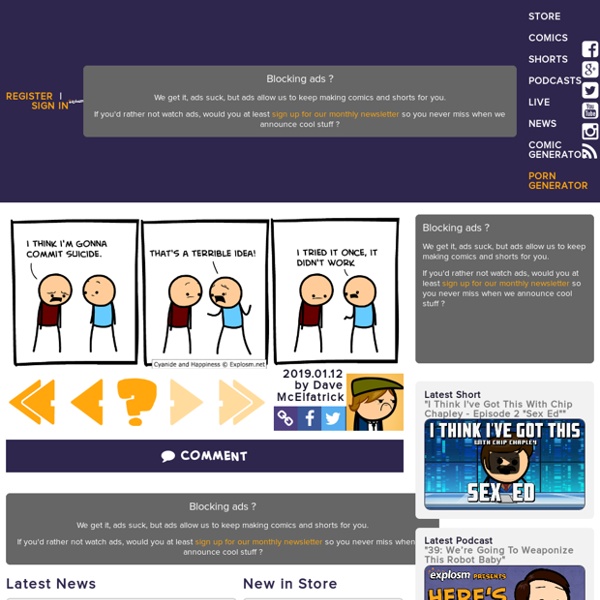 Can’t make it to India Comic Con… by derek on 02.04.2014 We’re bummed to announce that we won’t be able to make it to India comic con. There were some last-minute visa issues we had that, even with the help from the AMAZING team at India Comic Con, we weren’t able to fix in time. We’re sorry to disappoint everyone looking to go. Look who's coming back for Xmas!

Unsounded September 23, 2016, at 12:00 AM With these two NSFW pages and a Ch12 preview, that's a wrap for chapter 11! Unsounded's been going since July of 2010. Six years! 11 chapters and 940 colour pages to date. Not a bad run! Jonathan Fields I’ve always been a big believer in two concepts. One, that each voice counts. And, two, that just as we benefit from the gifts of society, we are similarly beholden to give back in some way, no matter how small, no matter how immediate. Professorial Density Function Coming Soon - Stay tuned for a BIG announcement about an awesome project Jorge is working on! PHD Store - Our store was down for a while, but now it is back! Free excerpt from The PHD Movie 2! - Watch this free clip from the movie that Nature called "Astute, funny"! Watch the new movie! - The PHD Movie 2 screenings are in full swing!

Romantically Apocalyptic Sign In or Create Account Follow Zee Captain: Become a Patreon APrevious NN Start reMIND I don’t usually bring up world events on this blog but I just can’t help myself. This is just too big to ignore. So we all know about the current war going on in Syria and Damascus (the capital of Syria) right? You have probably been hearing about all the drama between Israel, Russia, China and the US and everyone else right?

How to be less shy when meeting new people Rachel Pictor Roberts's image for: "Coping with Shyness" Caption: Location: Image by: Things Could Be Worse I am back and rested from ECCC 2014. Nice to meet so many fine people. This comic-illustration might be of use for those of you who find yourselves in a similar situation wishing to avoid offense.

6-Commando - An Online Graphic Novel by Mathieu Moyen So close. So very close now. And as I attempt to avoid freaking out in advance of the start of Season 2, I give you this piece of tomfoolery (matfoolery?) to tide you over until next week’s Fateful Day, when we gear up for another chapter of 6-Commando. This week, I have a little bit of nitty-gritty to add to the mix, and it’s about RSS feeds. I can already imagine everyone’s eyes glazing over. Shyness Shyness (also called diffidence) is the feeling of apprehension, lack of comfort, or awkwardness especially when a person is in proximity to other people. This commonly occurs in new situations or with unfamiliar people. Shyness can be a characteristic of people who have low self-esteem.