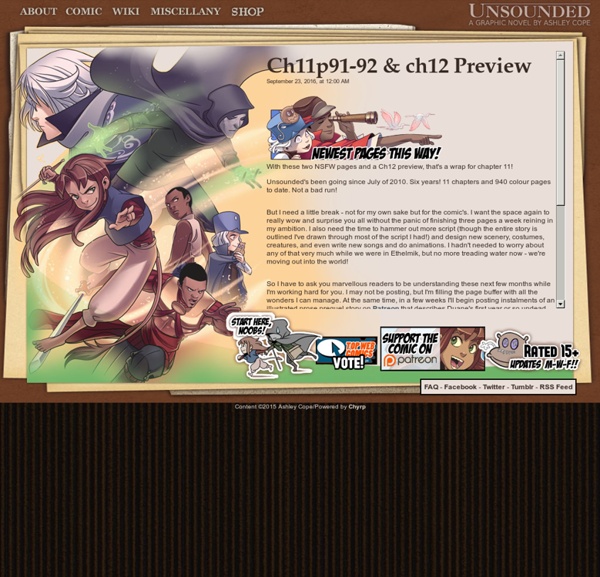 September 23, 2016, at 12:00 AM With these two NSFW pages and a Ch12 preview, that's a wrap for chapter 11! Unsounded's been going since July of 2010. Six years! 11 chapters and 940 colour pages to date. Not a bad run! But I need a little break - not for my own sake but for the comic's. So I have to ask you marvellous readers to be understanding these next few months while I'm working hard for you. But maybe you need more? It's been a heckuva ride and a real honour playing your storyteller. 72 Comments

Sea3on - Updates Weekly I know, I know.. I announced a new Sea3on artist some time ago as I had found one. Sami as you all know has worked on shorts before in the past, plus her work has always just been amazing. So, we (myself and her) were hoping for her to get back on her drawing path and become our main artist. Sadly over the course of the last month plus some her work life just became too hectic. Petite Symphony KnuckleUp! As many of you have probably already noticed, Godai has started up another regular comic to post on Sundays. Join Rushana, Hawke, and Moon as they travel across the galaxy tracking down shards of a magical talisman in KnuckleUp! Also, Year of the Cow has been moved to hiatus for the time being while Simon and Dew tackle some life events. We’ll keep you posted on updates of it’s return to active status.

RA To anyone who finds this tooth memory card and the messages left within... My name is Charles Snippy and I am probably the last sane human being left on Earth. I know not whether you will understand this message. I know not whether you'll even be able to decode the ones and zeros on this data card. Thermohalia browse community sign in now by thehappydorid 6 ratings (Avg 4.8) Chester 5000 XYV Friday — April 15th, 2016 Chester 5000 Valentines! February 13th, 2016 I made some Chester valentines for you! Relativistic Baseball What would happen if you tried to hit a baseball pitched at 90% the speed of light? - Ellen McManis Let’s set aside the question of how we got the baseball moving that fast. We'll suppose it's a normal pitch, except in the instant the pitcher releases the ball, it magically accelerates to 0.9c.

Immortal Weakling, List1 subscribe 43.4K view 725.2K grade 8.92 RATE You've already rated this.Would you like to rate it again? [Updates every other Saturday] In a world filled with superheroes, can a person who is immortal, but only has the strength of a normal human, become one of the best? Who knows, but Tai is dead set on trying. More series by Yaruno: Behemoths, Undead Dominion, Glacias

BRINK - You’re not as crazy as you think you are So here we are at the end, and pardon the use of cliches, but what a long, crazy ride it’s been. BRINK started back in 2006, and it seems fitting we end just shy of the original date it started over the 4th July weekend after attending Anime Expo so many years ago. This comic has always been, from it’s stat an experiment, one to test if I have the will power and dive to continuously update a story week to week, as well as push and play with visual story telling. Did everything turn out the way I had set it up in my mind almost 6 years later? Not perfectly, one thing I’ve taken away from this very long term test, is that I require a fully scripted comic to keep up with.