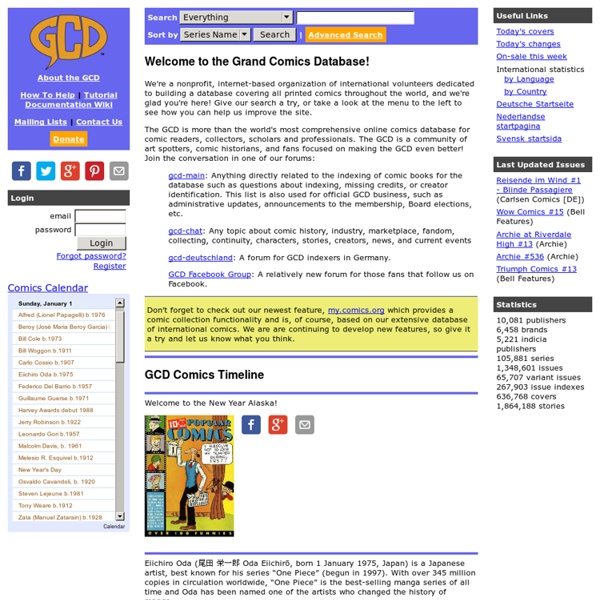 Welcome to the Grand Comics Database! We're a nonprofit, Internet-based organization of international volunteers dedicated to building a database covering all printed comics throughout the world, and we're glad you're here! Give our search form a try, or take a look at the menu to the left to see how you can help us improve the site. New search ! We have added a new search capability. It searches the different data objects at the same time and allows easier combination of different search terms.

Free Online Comic Books Two of the greatest obstacles that comics have in reaching readers are exposure and cost. Fortunately, the internet has provided remedies for both. Many comic book creators and publishers have put their comics online, available as full issues and at absolutely no cost to the reader. Webcomics « Viper Comics Kung Fu Bean Kung Fu Bean is a web comic following the journey of a smart-mouthed and adventure chasing bean. KFB finds himself fighting alongside the most unlikely of allies, Tank and X5. Religion of Comic Book Characters (esp. Super-Heroes) The emphasis of this page is on fictional characters who originated as comic book characters. Of course real-life people such as Pope John Paul II, St. Francis of Assisi, and Mother Teresa have been depicted in comic books (Marvel published one-shot comics about these prominent Catholics), but such people are not listed here. This page focuses on fictional comic book characters who are adherents of real-world (not purely fictional) religions.

s Best Comics of 2010: #1 The relationship between people and animals is often complicated, and has always been complicated since the first moment of domestication, when we made an animal more to us than just a living vessel of protein. What could we do? It followed us home. Three Trees Studios Well, after a massively long delay, our Rook City webcomic will once again be updating regularly at least for the next month or so as we finish off the “Convention Blues” storyline. 21 new pages will eventually be posted, making this by far the longest Rook City tale as of yet. The pages are all done (and even sent off to the printer) and will be posted one per weekday until the story concludes (except today when you get two pages and the cover). The story will see print in Rook City #2, which will premiere at Planet Comicon next month! Why the delay in finishing this story? Well, the main reason is that I got pulled away into a lot of other projects. In the time since I started this story, we have published three other comics and I’ve illustrated eight children’s books.

Lifelounge guide to foreign superheroes Movie goers across the country held their breathes in unison in the lead up to the release of The Avengers , hoping and praying its creators weren’t going to empty another giant spandex covered bucket of shit all over us. Thankfully however, they saved us from such a travesty and instead delivered one of the best superhero movies ever made. They finally managed to get Hulk right with Mark Ruffalo righting the wrongs of Eric Bana’s hideous acting brain-fart, Chris Evan’s useless wok-wielding Captain America was kept buoyant by the rest of the ensemble, Iron Man was always pretty cool as was Thor, and Scarlett Johanssen…well…she was in pretty good form. Point being, the movie kicked ass because of Whedon’s solid and thought-out writing, no holds-barred directing and a perfectly gelled group of superheroes. Anyway, in the wake of the film’s success and the resurgence of quality superhero movies, we got to thinking about the rest of world’s costume donning, crime-fighting hero peoples.

Greg Weisman Brings Big Plans To "Young Justice: Invasion" In the world of superhero animation, Greg Weisman is known as the man with the plan. From his acclaimed '90s series "Gargoyles" through his fan favorite run with "Spectacular Spider-Man," the writer and executive producer puts together shows chock full of world-building and continuity where twists and turns often become major payoffs as the seasons develop. Currently, Weisman is at the helm of "Young Justice: Invasion" – the second season of the Cartoon Network series that has grown to anchor the DC Nation block of Saturday morning programming. After a first season that wrapped with Vandal Savage taking control of the Justice League for some mysterious intergalactic sabotage, the "Invasion" story takes place five years after Season 1 with some major shake-ups to the team. Robin has become Nightwing, Kid Flash has retired and Aqualad has turned to the dark side, teaming up with his father Black Manta...or so it seemed. Greg Weisman: We had two-year game plan from pretty much day one.

‘Shazam!’ Remembering when superheroes weren’t quite so cool April 09, 2013 | 11:55 a.m. Shazam! Remembering when superheroes werent quite so cool Michael Gray as Billy Batson, left, with Jackson Bostwick, who played Captain Marvel in the original incarnation of the "Shazam!" Superheroes of Modernity Meet Superheroes of Pop Culture Gaga Faces the Past Dimitris Polychroniadis is an Athens, Greece Architect and Scenographer. He studied at the University of Greenwich with a BA in Architecture as well as a Masters in Urban Design. He attended the set design class at the Athens School of Fine Arts, and since qualifying he has worked in several practices obtaining a wide range of experience in architecture, design and construction.

The Super Dictionary One of the parts of his hand? Not even, “one of the long parts of his hand”? I mean, for all I know, you could be talking about Green Lantern’s knuckles! Or his fingernails. Comic Books for Grown-Ups: 10 Masterpieces of Graphic Nonfiction by Kirstin Butler Seeing the world in six-panel strips, or what Allen Ginsberg has to do with the wonders of zygotes. Who doesn’t love comic books? While infographics may be trendy today (and photography perennially sexy), there’s just something special about the work of the human hand.

7 More Alan Moore Comics That Could Get Librarians Fired A library employee in Kentucky was so offended by Alan Moore’s The League of Extraordinary Gentleman: The Black Dossier that she effectively took it out of circulation, and was recently fired for her efforts. But God knows what the amateur comics censor would have thought of the prolific Moore’s other titles, some of which make The Black Dossier look like Harold and the Purple Crayon. Here are seven arguably more controversial works that might have burned bigger holes in her pious backpack. From Hell Most everyone knows the story: A deranged madman named Jack the Ripper terrorizes England, immediately rendering it less jolly. But within Moore and artist Eddie Campbell‘s roughly drawn monstrous diagrams (pictured above) of mad science, dark magic and intertextual history lie horrors that would have given the crusading Kentucky librarian the creeps for the rest of her afterlife.