27 Amazing Graphic Novels For Readers New To The Genre 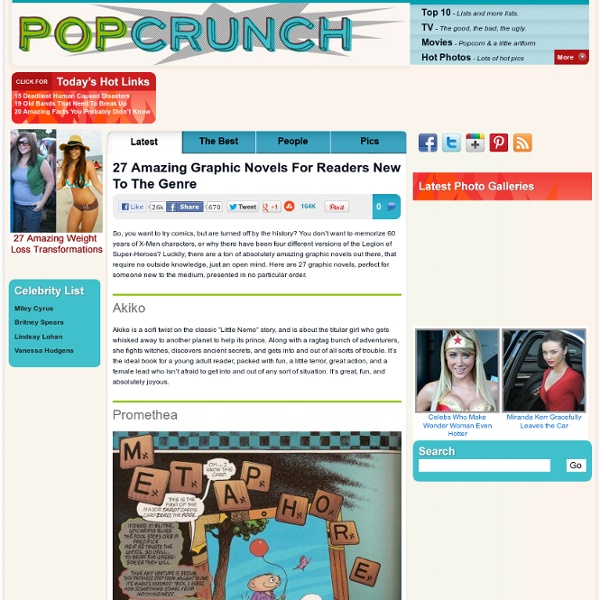 So, you want to try comics, but are turned off by the history? You don’t want to memorize 60 years of X-Men characters, or why there have been four different versions of the Legion of Super-Heroes? Luckily, there are a ton of absolutely amazing graphic novels out there, that require no outside knowledge, just an open mind. Here are 27 graphic novels, perfect for someone new to the medium, presented in no particular order. Akiko Akiko is a scifi twist on the classic “Little Nemo” story, and is about the titular girl who gets whisked away to another planet to help its prince. Promethea Lets just get this out of the way. Whiteout A great comic ruined by a shitty adaptation. 100% by Paul Pope Paul Pope is both author and artist in almost everything he’s involved with, and takes his sweet, sweet time doing it. Bone Bone starts with what should be a cutesy kid’s story, about three funny looking cousins who find themselves in a farming village, and quickly morphs into a fantasy epic. Blankets Fables Related:  Comics

Best Online Comic Book Store 23 Books for Your Perfect Young Adult Summer Reading List Wandering into the young adult section of your local bookstore is never something to be embarrassed about — even if you haven't actually been a teen in years. In fact, if you've left high school behind, you don't have to read Beowulf between now and September, which frees up time to check out the YA titles below. And if you're really paranoid about fellow beachgoers judging your teen-title, there's always the anonymity of a cover-less ereader. Award Winners It's not really judging a book by it's cover if you judge it by the impressively shiny seals adorning its cover. 1. This is the story of "Shorty"-a 15-year-old boy trapped in a collapsed hospital during the earthquake in Haiti. 2. Astrid Jones desperately wants to confide in someone, but her mother's pushiness and her father's lack of interest tell her they're the last people she can trust. 3. 4. Oct. 11th, 1943-A British spy plane crashes in Nazi-occupied France. 5. The Movies 6. 7. 8. 9. The Crossovers 10. 11. 12. 13. 14. 15. 16. 17.

Authors Say Agents Try to “Straighten” Gay Characters in YA « Genreville Editor’s note: The text of this post was written by Rachel Manija Brown, author of All the Fishes Come Home to Roost, and Sherwood Smith, author of Crown Duel and a great many other novels for adults and young adults. I am posting it in order to provide a pseudonymity-friendly space for comments from authors who have had similar experiences to the ones that Rachel and Sherwood describe. I strongly encourage all authors, agents, editors, publishers, and readers to contribute to a serious and honest conversation on the value and drawbacks of gatekeeping with regard to minority characters, authors, and readers, and to continue that conversation in all areas of the industry. –Rose Say Yes To Gay YA By Rachel Manija Brown and Sherwood Smith We are published authors who co-wrote a post-apocalyptic young adult novel. Our novel, Stranger, has five viewpoint characters; one, Yuki Nakamura, is gay and has a boyfriend. We knew this was a pie-in-the-sky offer—who knew if there would even be sequels?

Templar, Arizona Dark Legacy Comics J.K. Rowling Web Chat Transcript - The Leaky Cauldron Harry Potter and the Deathly Hallows Posted by: Melissa July 30, 2007, 01:09 PM J.K. Rowling has just answered a whole onslaught of post-DH question in a Web chat on Bloomsbury.com. Transcript coming: J.K. Leaky Cauldron: What, if anything, did the wizarding world learn, and how did society change, as a direct result of the war with voldemort? J.K. J.K. Ryan Love: From your fans at thesnitch.Co.Uk. J.K. J.K. J.K. Elisabeth: In the chapter of kings cross, are they behind the veil or in some world between the real world and the veil? J.K. Renee: From reading about the original owners of the deathly hallows, the peverell brothers, i’m wondering if harry and voldermort are distantly related voldermorts grandfather ended up with the resurrection stone ring? J.K. J.K. Fomy: What did you feel when you finally wrote the kiss, awaited so much by the fans, of ron and hermione J.K. J.K. Angela Morrissey: Why is it that albus dumbledore can see harry under his invisibility cloak at certain moments? J.K.

Young adult continues to be the literary world's fastest-growing genre - Summify Thank J.K. Rowling for starting the kid's book craze with "Harry Potter" and Stephenie Meyer's "Twilight" saga for perpetuating the trend that has more adults reading children's titles than ever before. The year 2011 has seen an explosion of books catering to this ever-expanding bimodal audience, not only in novels for young adults but increasingly in titles for middle-grade readers, elementary schoolers, even the preschool set. Whether they're penned by the growing legions of bestselling authors who are now writing for a younger audience, or first-time novelists with intriguing stories to tell, this year has been a boon for the genre. Young adult continues to be white hot, due in no small part to Suzanne Collins' hugely popular "Hunger Games" trilogy, which has triggered an avalanche of dystopian fiction set in barely recognizable, post-Apocalyptic Americas. Six years after "Twilight" became a household name, cross-creature love triangles continue to be popular.

comics « Failbetter Games Hello there, and welcome to Fallen London Comics. What’s this then? Failbetter is releasing a short, self-contained comic story, two pages at a time, over the course of this week. It’s written by Chris Gardiner and illustrated by me, Paul Arendt. This is an highly experimental project, and we need YOUR feedback. If you’re new to Fallen London… Hello, delicious stranger! Got questions or feedback? Literature: "Among the Hidden" by Margaret Peterson Haddix Global rating average: 0.0 out of 50.00.00.00.00.0 These sites are about the book “Among the Hidden” written by Margaret Peterson Haddix. Includes discussion questions, an online interactive quiz, a ppt, a biography of the author, and a role-playing activity. There are links to eThemes Resources on Overpopulation and Utopias. Grades Links Teacher's Guide for "Among the Hidden" by Margaret Peterson Haddix This teacher's guide for "Among the Hidden" includes information about the book, discussion topics, activities and research, and info about the author. Education Standards Request State Standards

Iron Man Iron Man is a fictional character, a superhero that appears in comic books published by Marvel Comics. The character was created by writer-editor Stan Lee, developed by scripter Larry Lieber, and designed by artists Don Heck and Jack Kirby. He made his first appearance in Tales of Suspense #39 (March 1963). Publication history[edit] Premiere[edit] Iron Man's Marvel Comics premiere in Tales of Suspense #39 was a collaboration among editor and story-plotter Stan Lee, scripter Larry Lieber, story-artist Don Heck, and cover-artist and character-designer Jack Kirby.[2] In 1963, Lee had been toying with the idea of a businessman superhero.[3] He wanted to create the "quintessential capitalist", a character that would go against the spirit of the times and Marvel's readership.[4] Lee said, I think I gave myself a dare. In his premiere, Iron Man was an anti-communist hero, defeating various Vietnamese agents. Themes[edit] First series[edit] Later volumes[edit]