The Shadow Scholar - The Chronicle Review 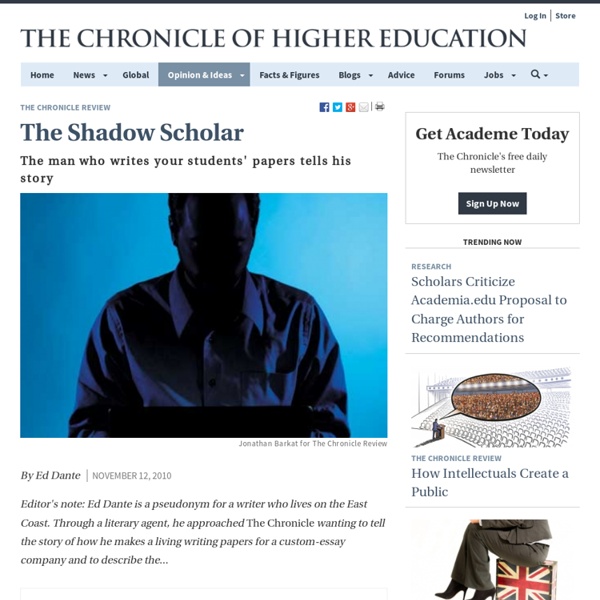 Pink Tentacle Stephen Downes: The Role of the Educator How often do we read about the importance of teachers in education? It must be every day, it seems. We are told about "strong empirical evidence that teachers are the most important school-based determinant of student achievement" again and again. The problem with the educational system, it is argued, is that teachers need to be held accountable. The problem with focusing on the role of the teacher, from my perspective, is that it misses the point. Let me tell you how I know this. Each of these has contributed in one way or another to an overall approach not only to learning online but to learning generally. It's an approach that emphasizes open learning and learner autonomy. It's an approach that emphasizes exercises involving those competencies rather than deliberate acts of memorization or rote, an approach that seeks to grow knowledge in a manner analogous to building muscles, rather than to transfer or construct knowledge through some sort of cognitive process.

California Dumps STAR Test - Schools - Fremont, CA Patch Governor Brown signed legislation that eradicates the STAR test and brings winds of change to California's public school system Written by Vanessa Castañeda Students in California’s public schools no longer have to take the infamous exit exam called the STAR test. Governor Jerry Brown signed legislation on Tuesday that upgrades the state’s educational standards with the aid of modern technology. AB484, authored by Assemblywoman Susan A. Bonilla (D-Concord), facilitates the creation of a roadmap that will enable educators to determine how much knowledge students are absorbing and adjust their lesson plans accordingly. "This is one of the most important and revolutionary changes to education policy, and California is the right state to lead the way," Bonilla said in a statement. The bill creates a new system called the Measurement of Academic Performance and Progress, which sets new learning targets for educators to reach based on grade levels.

A Little Shame Goes a Long Way - Commentary By Jonathan Zimmerman Shame on us! The cat is finally out of the bag about what our students are learning, and it isn't pretty. It's more like a dog, or maybe a pig. I'm talking about the much-discussed Academically Adrift by my New York University colleague Richard Arum and Josipa Roksa of the University of Virginia, which demonstrates that nearly half of college undergraduates don't significantly improve their reasoning or writing skills over the first two years of college. And yes, we should all be ashamed about that. The authors based their conclusions on the Collegiate Learning Assessment, an essay-only test designed to measure higher-level thinking and expression. Arum and Roksa tracked more than 2,300 students at 24 different institutions, including selective liberal-arts colleges and big land-grant universities, as well as historically black and Hispanic institutions. The reason isn't hard to find: Most students don't read and write very much. So how can we change any of that?

Using Clickers to Facilitate Peer Review in a Writing Seminar This is a guest post by Derek Bruff, assistant director at the Vanderbilt University Center for Teaching and senior lecturer in mathematics at Vanderbilt. You can follow Derek on Twitter (@derekbruff) and on his blog, where he writes about educational technology, student motivation, and visual thinking, among other topics. I teach math courses, but for the first time this fall, I’m teaching a first-year writing seminar. It’s still a math course, since the topic is cryptography (codes and code-breaking), but it has a healthy dose of history and, perhaps most significantly, writing. Teaching a writing seminar has also provided me with an opportunity to use clickers in ways that are new to me. One of many components of teaching writing that’s new to me is the in-class peer review of student drafts. My students’ first essay assignment, a three-page opinion piece addressing one of three questions I provided, was due recently. For example, one of the categories was “clarity of opinion.”

Infographic of the Day: Is College Really Worth It? | Fast Compa Is going to college really worth it? Probably so, but it's not that clear cut, and economics have been arguing the point for 30 years. Most studies tend to show that college-educated people end up making far more money in the course of their lifetimes. (The niggle: Usually, it's not worth paying for a private university.) Still, that evidence isn't totally cut and dry: What do you really learn in college? This graph makes a couple points in that debate: 1. But who in their right mind wouldn't recommend a college degree? If I had a guess, I think it's precisely that attitude that creates all the economic advantages--its the way our society is organized, rather than anything about college itself. [Luxury Spot via WeLoveDataVis; I suspect this graphic is actually from OnlineEducation but couldn't find it on their Web site You can find the original at Online Colleges and Universities, which seems to affilated with OnlineEducation] [View more Infographics of the Day]

Is the Internet making us smart or stupid? Venkatesh Rao is an entrepreneur-in-residence in the Xerox Innovation Group and manager of the Trailmeme project. Nicholas Carr, a writer devoted to exploring the social and business implications of technology, came out with his latest book last month. It’s called The Shallows: What the Internet is Doing to Our Brains and is a book-length elaboration of his much-discussed 2008 Atlantic feature, “Is Google Making us Stupid?.” If you don’t have good answers to the questions Carr raises, you aren’t thinking hard enough about what you are doing. Carr’s argument is roughly this: 1. When Carr’s article first appeared, I enthusiastically co-opted it into the pitch for Trailmeme, the beta project I manage at Xerox. Carr’s book has added a lot more detail to the arguments he made in his initial article, and situated them within a historical context. Reading The Shallows had me going, “Whoa! I have a problem with this. I love hyperlinks. 1. Before and After Hyperlinks Levers have two sides.

Kansas illegally underfunds poorer school districts, court rules Wading into a battle being fought in state capitols across the nation, the Kansas Supreme Court ruled Friday that disparities in the public funding of school districts violate the state constitution. The court ordered Kansas to cure these disparities by July 1 and asked a lower court to evaluate how much the state should be investing in public schools. It was not quite the slam-dunk ruling that school funding advocates had hoped for; the court did not set funding levels, as a lower court had. But education advocates, who have been battling the Kansas Legislature on school funding levels for more than a decade, cheered the ruling nonetheless. "It's a good day to be a Kansan," said Annie McKay, the executive director of the Kansas Center for Economic Growth, which advocates for state funding for services. Legislatures in many states, including Kansas, began reducing school funding in 2009 during the economic recession. The lawsuit, Gannon vs. alana.semuels@latimes.com

The Disadvantages of an Elite Education: an article by William Deresiewicz about how universities should exist to make minds, not careers | The American Scholar Exhortation - Summer 2008 Print Our best universities have forgotten that the reason they exist is to make minds, not careers By William Deresiewicz It didn’t dawn on me that there might be a few holes in my education until I was about 35. I’d just bought a house, the pipes needed fixing, and the plumber was standing in my kitchen. It’s not surprising that it took me so long to discover the extent of my miseducation, because the last thing an elite education will teach you is its own inadequacy. I’m not talking about curricula or the culture wars, the closing or opening of the American mind, political correctness, canon formation, or what have you. The first disadvantage of an elite education, as I learned in my kitchen that day, is that it makes you incapable of talking to people who aren’t like you. But it isn’t just a matter of class. I also never learned that there are smart people who aren’t “smart.” What about people who aren’t bright in any sense?

750 Words World's total CPU power: one human brain How much information can the world transmit, process, and store? Estimating this sort of thing can be a nightmare, but the task can provide valuable information on trends that are changing our computing and broadcast infrastructure. So a pair of researchers have taken the job upon themselves and tracked the changes in 60 different analog and digital technologies, from newsprint to cellular data, for a period of over 20 years. The trends they spot range from the expected—Internet access has pushed both analog and digital phones into a tiny niche—to the surprising, such as the fact that, in aggregate, gaming hardware has always had more computing power than the world's supercomputers. The authors were remarkably thorough. Even so, there are some significant estimations here. Similar sorts of estimates are required for things like broadcast capability and two-way communications, both of which are compiled as bits-per-second figures. Storage Some trends are very, very obvious. Computation

American teachers: A noble profession - latimes.com At a time when teachers and their unions are under fire across the nation, my eldest daughter just had a much-anticipated interview with Teach for America. She will graduate from college in May and hopes to be a teacher in the fall. She was worried that I'd be disappointed she didn't feel a desire for graduate school. But I was thrilled. Think about it: We aren't legally mandated to spend as much time with any other kind of person as we are with teachers. Still, with all the contempt and anger being hurled at teachers right now, it's alarming to be sending a daughter into the crossfire, especially when new teachers are the first to be threatened with pink slips. The growing scorn for public school teachers is at every level of education. Last fall, a video posted by blogger Shannyn Moore showed Sarah Palin and her daughter Willow confronting a woman protesting during the filming of Palin's reality TV series on a fishing dock in Homer, Alaska. I believe it.