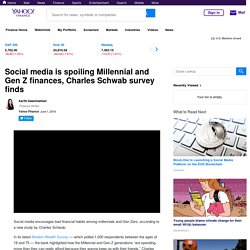 In its latest Modern Wealth Survey — which polled 1,000 respondents between the ages of 18 and 75 — the bank highlighted how the Millennial and Gen Z generations “are spending more than they can really afford because they wanna keep up with their friends,” Charles Schwab Vice President and Senior Financial Consultant Abel Oonnoonny told Yahoo Finance’s The Final Round (video above).

Pew Research defines “Millennials” as those born between 1981 and 1996, with “Gen Z” representing those born in 1997 and after. 3 Ways Millennials And Gen-Z Consumers Are Radically Transforming The Luxury Market. Getty A new study is out that sets the stage for a radically transformed luxury market by 2025. 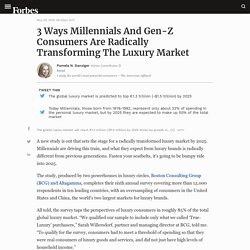 Millennials are driving this train, and what they expect from luxury brands is radically different from previous generations. Fasten your seatbelts, it’s going to be bumpy ride into 2025. The study, produced by two powerhouses in luxury circles, Boston Consulting Group (BCG) and Altagamma, completes their sixth annual survey covering more than 12,000 respondents in ten leading countries, with an oversampling of consumers in the United States and China, the world’s two largest markets for luxury brands. All told, the survey taps the perspectives of luxury consumers in roughly 85% of the total global luxury market. For example, consumers had to spend a minimum of €5,000 (about $5,600) in total on personal luxury goods over the past 12 months with threshold levels of spend set for specific categories, such as €1,000 for handbags, €350 for shoes and €250 for jeans. Getty. Millennials, Gen Z Pessimistic on Life, Deloitte Survey Shows.

Uneasiness and pessimism abound among the majority of the world's population. 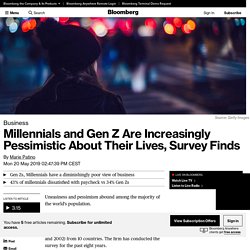 Deloitte has released its Global Millennial Survey of 13,416 Millennials (born between 1983 and 1994) spread across 42 countries and 3,009 Gen Z respondents (born between 1995 and 2002) from 10 countries. The firm has conducted the survey for the past eight years. The percentage of respondents who think that businesses are making a positive impact dropped six points from 61% in 2018 to 55%. ``I would say that for businesses, the most important takeaway is the continuously diminishing trust of Millennials and Gen Zs, " says Deloitte Global Chief Talent Officer Michele Parmelee. While the two generations have strikingly similar views of the world, Parmelee said survey data shows that their points of view differ in a few significant areas, such as life priorities and their perception of society and work. Generally, only about half of both groups aspire to purchase a home, and even fewer desire to start a family.

Why millennials will miss Boomers when they're gone. It has become in vogue among millennials to mock the Baby Boomer generation as out-of-touch, reactionary, and complicit in destroying the planet. 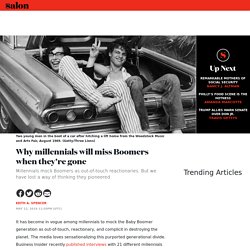 The media loves sensationalizing this purported generational divide. Business Insider recently published interviews with 21 different millennials explaining “why Boomers are the problem.” An Axios-SurveyMonkey poll found that 51% of millennials agreed that Baby Boomers had made things worse for their generation. Meanwhile, there are multiple Facebook groups devoted to mocking the oft-inane or offensive images that Boomers share on social media. Study: Millennials less healthy than Gen Xers were at the same age. Economist. Here Is When Each Generation Begins and Ends, According to Facts. We can all agree that Millennials are the worst. 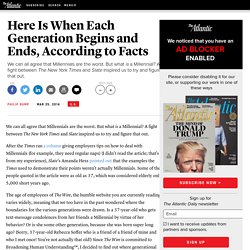 But what is a Millennial? A fight between The New York Times and Slate inspired us to try and figure that out. After the Times ran a column giving employers tips on how to deal with Millennials (for example, they need regular naps) (I didn't read the article; that's from my experience), Slate's Amanda Hess pointed out that the examples the Times used to demonstrate their points weren't actually Millennials. Some of the people quoted in the article were as old as 37, which was considered elderly only 5,000 short years ago. Genervacation: why the ‘bank of mum and dad’ now offers travel. The “bank of mum and dad”, that increasingly common source of financial support for young adults struggling with student loans and booming house prices, is going into the travel business. 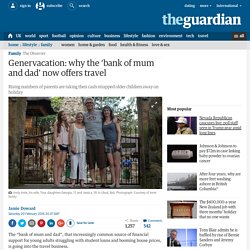 Tourism experts are predicting a surge this year in the number of parents planning to take their cash-strapped twentysomething children away with them when they go on holiday. It appears that the baby-boomer generation is weighed down with a sense of guilt for still having cash to spend when its adult offspring are laden with debt, struggling to find work, and finding it almost impossible to save for a deposit. While the rise of what travel firms are calling the “genervacation” has been building for some time, it has received a turbo boost from pension reforms and soaring property prices. Businessinsider.

For the first time in America’s history, an entire generation of her citizens is poorer, more indebted, and less employed than the preceding generations. 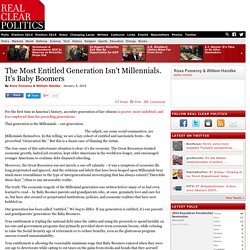 That generation is the Millennials – our generation. The culprit, say some social commenters, are Millennials themselves. In this telling, we are a lazy cohort of entitled and narcissistic brats– the proverbial “Generation Me.” But this is a classic case of blaming the victim. Gen Z, iGen, ‘Founders’: What should we call the post-millennials? Gen Z? 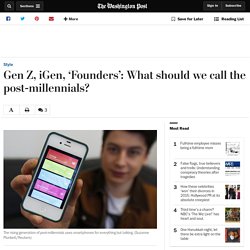 IGen? Generation Me? The Selfie Generation? A lot of names have been thrown around, but when it comes to the teens and tweens of today — the youngsters who aren’t old enough to be considered millennials — the official generational title is still up for grabs. So MTV made a move to claim it Wednesday with an announcement that the post-millennial generation will now be known as the Founders Generation. The general response: Oh, really? According to MTV, a focus group of more than 1,000 13- and 14-year-olds chose the name, saying that it reflects their place in a rapidly evolving world. 7 Things Employers Should Know About The Gen Z Workforce.

Move over Millennials, there’s a new incoming workforce–and they’re just as confusing to employers as you were. 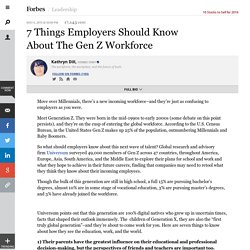 Meet Generation Z. They were born in the mid-1990s to early 2000s (some debate on this point persists), and they’re on the cusp of entering the global workforce. According to the U.S. Forbes Welcome. Gen X and Y, Come Together Right Now! Last week Hera Hub gave a shout-out to women above the age of 40 (holla!). 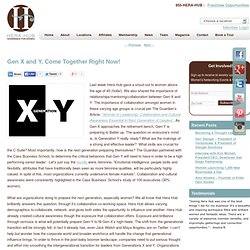 We also shared the importance of relationships/mentoring/collaboration between Gen-X and Y. The importance of collaboration amongst women in these varying age groups is crucial per The Guardian’s Article, “Women in Leadership: Collaboration and Cultural Awareness Essential In Next Generation of Leaders”. As Gen X approaches the retirement bench, Gen-Y is preparing to Batter up.