Moon conjunct venus synastry. The Moon and Venus are both feminine planets. 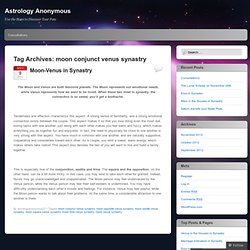 The Moon represents our emotional needs, while Venus represents how we want to be loved. When these two meet in synastry, the connection is so sweet, you’ll get a toothache. Tenderness and affection characterize this aspect. A strong sense of familiarity, and a strong emotional connection exists between the couple. This aspect makes it so that you love doing even the most dull, boring tasks with one another; just being with each other makes you feel warm and fuzzy, which makes everything you do together fun and enjoyable.

This is especially true of the conjunction, sextile and trine. In synastry, what does it mean to have venus conjunct mars. Wow! 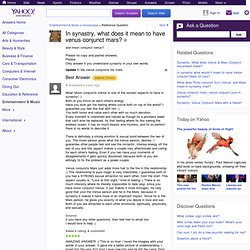 Moon conjuncts Venus is one of the sexiest aspects to have in synastry! :) Both of you thrive on each other's energy. Have you ever got the feeling where you're both on top of the world? I guarantee you feel like that with him :) You both honor and value each other with so much devotion. Every moment is cherished and valued as though its a priceless jewel that can't ever be replaced. There is definitely a strong emotion & sexual bond between the two of you. Venus conjuncts Mars just adds more fuel to the fire in this relationship :) This relationship is pure magic & very irresistible. 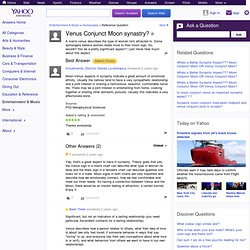 Venus describes how a person relates to others, what their idea of love is about (we only feel loved, if someone behaves in ways that say "loving" to us, and everyone has their own conceptions about what love is or isn't), and what behaviors from others we want to have in our own relationships. Moon is a person's emotional responses and reactions.

So when his Venus and her Moon are in the same same, this indicates that his relationship style is on the same wavelength as her emotional style. This is only mild ... unless there these two planets are within 8 degrees of each other (a conjunct aspect), in which case there is a strong emotional link. His way of relating brings out her positive, nurturing emotions, which helps him feel emotionally safe with her. Moon-Conjunct-Venus Synastry (and Other aspects between) Posted October 17, 2010 03:07 PM thanks for the replies everyone! 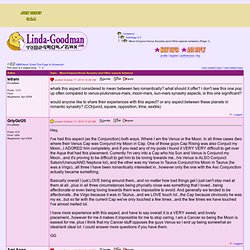 Just seems this aspect isnt spoke of much, maybe because its not a frequent aspect (pluto for example is the slowest moving, everyone born on a certain date of their year(s) group will have this aspect with people involving pluto) i think ones like sun-moon and venus-moon are less frequent. dolphin, i can certainly relate, as we have the mutal reception/dw aspect as you do - even the same way round, her Venus in Aries Conjunct my Moon in Aries her Moon in Capricorn (28/29th/critical degree? We don't have a Sun-Moon conjunction though (that is sweet ontop of moon venus i would imagine!) Her Sun is conjunct my NN and both rest in my 7th house. her sun tightly opposes my sun (my sun is conjunct my southnode) we also have Venus-Opposition Venus, and the marriage thing is definitely strong in ours, cardinally it is strong.. because we have this moon-venus aspect double whammy, but we also have Saturn-Square-Venus double whammy!