Equations of Living and Dying. For Tony, it's something that has always been there, in the back of his mind nestled between the numbers and equations. 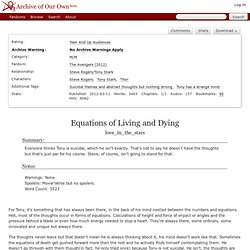 Hell, most of the thoughts occur in forms of equations. Calculations of height and force of impact or angles and the pressure behind a blade or even how much energy needed to stop a heart. They're always there, some ordinary, some innovated and unique but always there. The thoughts never leave but that doesn't mean he is always thinking about it, his mind doesn't work like that. Sometimes the equations of death get pushed forward more then the rest and he actively finds himself contemplating them. 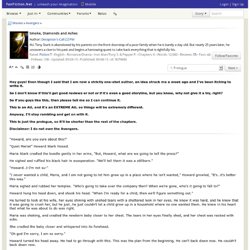 Even though I said that I am now a strictly one-shot author, an idea struck me a week ago and I've been itching to write it. So I don't know if this'll get good reviews or not or if it's even a good storyline, but you know, why not give it a try, right? So if you guys like this, then please tell me so I can continue it. This is an AU, and it's an EXTREME AU, so things will be extremely different.

Anyway, I'll stop rambling and get on with it. This is just the prologue , so it'll be shorter than the rest of the chapters. Disclaimer: I do not own the Avengers. "Howard, are you sure about this? " "Quiet Maria! " Maria Stark cradled the bundle gently in her arms, "But, Howard, what are we going to tell the press? " He sighed and ruffled his black hair in exasperation. The Twice-Told Tale. Mutant Emotions (WIP, Mutant Tony) AN~ Hey Y'all, Here's The Story You Guys Voted For The Most! 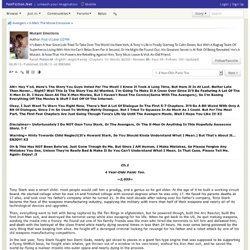 I Know It Took A Long Time, But Here It Is At Last. Better Late Than Never... Right? Well This Is The Story You All Wanted, I'm Going To Make It A Cross Over Since It'll Be Featuring A Lot Of The X-Men In It. I Have Seen All The X-Men Movies, But I Haven't Read The Comics(Same With The Avengers), So I'm Basing Everything Off The Movies & Stuff I Get Off Of The Internet. Okay, I Just Want To Warn You Right Now, There's Not A Lot Of Dialogue In The First 5-7 Chapters.

Making Up For Lost Time. Tony was going through a box of Howard's belongings that he found in the attic of the Manhattan residence when he saw the paper. 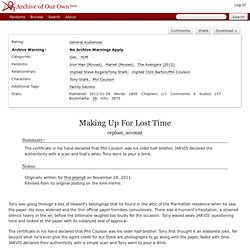 His eyes widened and the thin official paper trembles convulsively. There was a moment's hesitation, a strained silence heavy in the air, before the billionaire laughed too loudly for the occasion. Tony waved away JARVIS' questioning tone and looked at the paper with its notarized seal of approval. The certificate in his hand declared that Phil Coulson was his older half-brother. Tony first thought it an elaborate joke, far beyond what he'd ever give the agent credit for but there are photographs to go along with the paper, faded with time. A day later, Tony stalked into Coulson's office and took a seat in the chair next to his desk. “Did you know about this?” “I was made aware of your existence when Howard stopped visiting my mother. “You didn't say anything? Cardio. Hey! 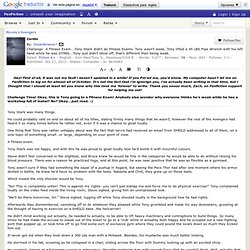 First of all, it was not my fault i haven't updated in a while! If you Pm'ed me, you'd know. My computer hasn't let me on Fanfiction to log on for almost all of October. Abnormality. Here's a story! 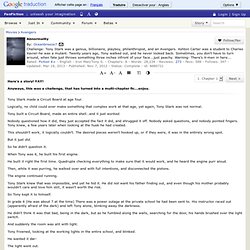 YAY! In the Company of Friends. Tony Stark felt like crap. 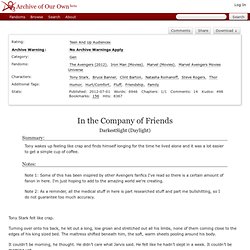 Turning over onto his back, he let out a long, low groan and stretched out all his limbs, none of them coming close to the edges of his king sized bed. The mattress shifted beneath him, the soft, warm sheets pooling around his body. It couldn’t be morning, he thought. He didn’t care what Jarvis said. Perspective. A/N: Thanks to the people at TBB for the beta. 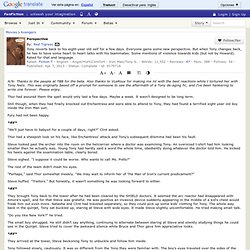 Also thanks to VLeRoux for making me lol with the best reactions while I tortured her with Tony feels. This was originally based off a prompt for someone to see the aftermath of a Tony de-aging fic, and I've been hankering to write one forever. Please enjoy. Thor had assured them the spell would only last a few days. Depressing (Suicidal!Tony, Self Harm, Addiction, etc.) Covered. Tony ... woke. 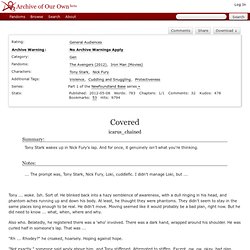 Ish. Sort of. He blinked back into a hazy semblence of awareness, with a dull ringing in his head, and phantom aches running up and down his body. At least, he thought they were phantoms. They didn't seem to stay in the same places long enough to be real. Also who. "Rh ... Underrate Risks. Alright! 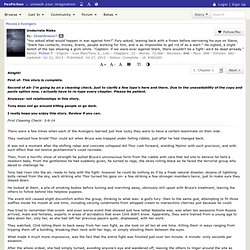 First of- This story is complete. Second of all- I'm going by on a cleaning check, just to clarify a few typo's here and there. Due to the unavailability of the copy and paste option now, i actually have to re-type every chapter. Burning Candles. "My candle's burning at both ends It will not last the night. But Oh my foes, and Ah my friends It sheds a lovely light.

" - Enda St. Bend and Break. Six hours after shawarma, two hours after the endless debriefing with Director Fury, Steve found himself in SHIELD Medical, explaining for the ninth time that he was fine, he would be just fine, thank you very much. It was starting to get old. He knew the wound in his stomach looked bad, and it didn't exactly feel great – but he also knew that it was already starting to heal, and there was really nothing the SHIELD personnel could do.

Most drugs did not work on him, and while he knew pharmaceuticals had come a long way from the 1940s, he was still pretty sure they would have the same results: namely, none. And he was tired of being poked and prodded at and marveled over. Sivaas.