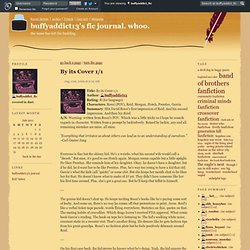 And his second impression. And then his third. The Batter's Box. When you step into the batter's box, have nothing on your mind except baseball. – Pete Rose It is strange being back at the BAU. 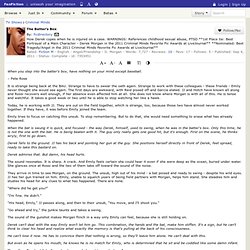 Strange to have to swear the oath again. Strange to work with these colleagues - these friends - Emily never thought she would see again. The first days are awkward, with Reid pissed off and Garcia elated. Today, he is working with JJ. Waking The Fallen. Title: Waking the Fallen (1/1)Genre: Friendship/ComfortRating: FRGCharacters: Derek Morgan, Emily Prentiss.Disclaimer: Don’t own it, just love it.Summary: Post "Omnivore". 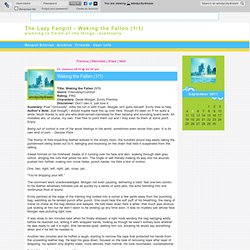 After his run in with Foyet, Morgan isn't quite himself. Emily tries to help.Author’s Note: Just thought I should maybe back this up over here, though it's been on ff for quite a while. Much thanks to and she-who-shall-remain-nameless for their betaing and sounding board work. Night Divides the Day. Title: Night Divides the DayPairings: GenRating: R, for thematic elementsWarnings: References to canonical child sexual abuseSummary: Fifteen minutes in the life of Derek Morgan. 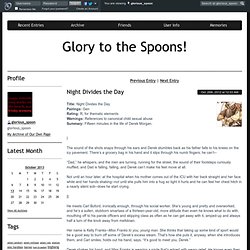 The sound of the shots snaps through his ears and Derek stumbles back as his father falls to his knees on the icy pavement. There’s a grocery bag in his hand and it slips through his numb fingers; he can’t-- “Dad,” he whispers, and the men are turning, running for the street, the sound of their footsteps curiously muffled, and Dad is falling, falling, and Derek can’t make his feet move at all. Not until an hour later, at the hospital when his mother comes out of the ICU with her back straight and her face white and her hands shaking--not until she pulls him into a hug so tight it hurts and he can feel her chest hitch in a nearly silent sob--does he start crying.

Super Powers. Derek never thought he'd be the one answering a call just as Valentine's with all the singles was getting its groove on. 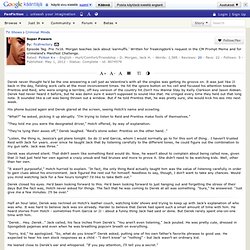 It was just like JJ back in the day, fielding work calls at the most inconvenient times. He hit the ignore button on his cell and focused his attention towards Prentiss and Reid, who were singing a terrible, off-key version of the country hit Don't You Wanna Stay by Kelly Clarkson and Jason Aldean. Derek had never heard it before, but he was damn sure it wasn't supposed to sound like that. He cringed every time they held out that long note. It sounded like a cat was being thrown out a window. His phone buzzed again and Derek glared at the screen, seeing Hotch's name and scowling. "What? " Skeletons and Ballerinas. 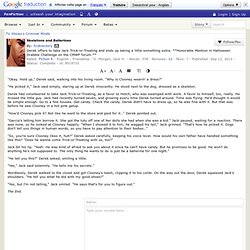 Hold up," Derek said, walking into his living room. "Why is Clooney wearin' a dress? " "He picked it," Jack said simply, staring up at Derek innocently. He stood next to the dog, dressed as a skeleton. Derek had volunteered to take Jack Trick-or-Treating, as a favor to Hotch, who was swamped with work. Parallels - Welfycat - Criminal Minds. Derek Morgan sometimes thought that he and Spencer Reid had the exact same problem: not knowing what to say and how to be heard. 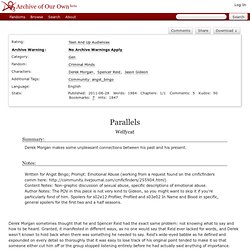 Granted, it manifested in different ways, as no one would say that Reid ever lacked for words, and Derek wasn't known to hold back when there was something he needed to say. Reid's wide-eyed babble as he defined and expounded on every detail so thoroughly that it was easy to lose track of his original point tended to make it so that someone either cut him off or the group stopped listening entirely before he had actually said anything of importance. Or, maybe it wasn't that Derek didn't know what to say, he had a few choice words saved up if he ever got the chance to use them, but he didn't know how to say them in a way that wouldn't make the situation worse. He could imagine the scene clearly, confronting Gideon in his office one day when the rest of the team had gone home.

The Darkest Stain of Love. Disclaimer: I don't own Criminal Minds "Suicidology isn't a perfect science, but it's uncommon for women to kill themselves so violently. 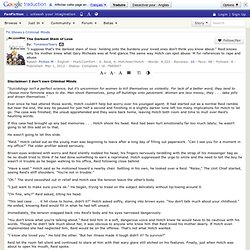 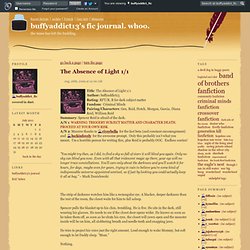 A/N 1: WARNING: TRIGGERY SUBJECT MATTER AND CHARACTER DEATH. PROCEED AT YOUR OWN RISK. A/N 2: Massive thanks to riverbella for the fast beta (and constant encouragement) and luckinfovely for the awesome prompt. "You might try then, as I did, to find a sky so full of stars it will blind you again. The strip of darkness watches him like a rectangular eye. Checkmate. "In life, unlike chess, the game continues after checkmate. 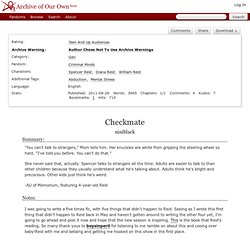 "—Isaac Asimov September, 1986 “Hey, you’re pretty good.” The man smiles as Spencer looks up. “Do you play chess a lot?” Of Death And Coffee Runs. Death does not concern us, because as long as we exist, death is not here. And when it does come, we no longer exist. Epicurus Knowing you're going to die is a funny thing. The King of All The Wild Things. Title: The King of All Wild ThingsCharacter/pairing: ReidRating: PGWords: 786Summary: Spencer didn't know what it was like to have terrible eyes and terrible claws, but he knew what it was like to want them. Notes: This story relies heavily on the text of Where the Wild Things Are, which means that if you come across a line that you don't think is mine then you are right, it probably isn't.

(Maurice Sendak, I love you and mean no disrespect.) Written for comment_fic prompt: Criminal Minds, Spencer, Where The Wild Things Are. His Favorites. It was a weird moment for him. He watched Henry appear from behind J.J. - a miniaturized version of himself. The details were exactly right, no doubt due to J.J.’s unfailing eye for subtle anachronisms (did his bag really make him look that ungainly?). Henry looked up at him through untended blonde locks with silent questions.

ATL. ATLWords: 1664Fandom: Criminal MindsRating: PG-13Spoilers: Spoilers for all current episodes (through 6.02 "JJ").Warnings/Triggers: drug addictionPrompt: for hc_bingo, prompt "drug addiction"Summary: Reid and JJ share two of the most difficult days of their lives, with a promise to link them. // thanks to saintawesome for the beta! ♥ JJ didn’t start crying when she saw that Reid was alive.

She didn’t start crying when he hugged her tight and whispered “it’s all right, it’s not your fault.” Away from the group, she leaned up against the side of the SUV and tried to calm down. When Reid finally trundled over, flanked by Hotch on one side and Gideon on the other, JJ quickly attempted to compose herself. Therapy. Title: TherapyAuthor: InvaderkRating: T, edging on M if you're into reading between the lines.Pairings/Characters: ReidWarnings: Mentions of extreme violence and drug abuse. Non-sexual nudity (if that counts). Bizarreness. Broken Places. Pomegranate Seeds.

Emily had been a teenaged girl in The UAE. Four years of head covering and being chaperoned every where she went. Four years of listening to imams talk about submission and modesty. Four too many years. Rev. Talbot's congregation has taken the subjugation of women to a level even the imams might object to. The service is long, almost three hours. The case is easy to solve. On The Other Side. Two Week's Notice. Better Left Unsaid. You Have One New Message. Part Of The Script. False Starts and Still Beating Hearts. Secrets of a Mean Girl.

A/N: This is my first ever fic that I've posted on FF so review and tell me what you think! "Valedictorian, soccer scholarship, corn-fed but still a size zero. I think that you might've been a mean girl. " For Both Comfort and Company. Dawn. She doesn’t sleep on the way home. She knows they already see her as the weak link, a chink in their armor – they must, because she does, and the BAU team includes some of the most startlingly self-aware individuals she’s ever met. They’re also kind enough to simply nudge her awake if they hear her whimper in her sleep. But this night isn’t a whimper, it’s a scream she can already feel creeping up the back of her throat, carried on the coppery tang of blood; and to sleep now would set it free. So she doesn’t, meticulously filling out her report as soft snores fill the cabin. “You asked about your father, earlier.” “I – yes.” Stages. It's strange to sit in a room, waiting to talk to Hotch. Ashley won't admit that the last thing she wants to do is talk to him.