Under what Moon Phase Were You Born? Category: Moon Each of us has a particular personality trait depending on which phase the moon was in at the time of birth. 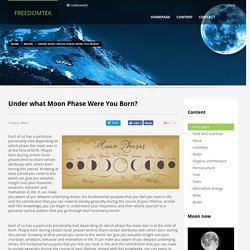 People born during certain lunar phases tend to share certain attributes with others born during this period. Knowing at what period you came to this world can give you valuable insight into your character, emotions, behavior and motivation in life. It can make you aware of you deepest underlying drives, the fundamental purpose that you feel you have in life, and the contribution that you can make to society generally during the course of your lifetime. Armed with this knowledge, you can begin to understand your responses, and then attune yourself to a personal cyclical pattern that you go through each and every month.

First, you need to find your lunar birth phase, which is the stage that the moon was in at the time of your birth. Just type in your birthdate, and it will give you a picture of the moon on that day. Count that as Day One. Lunations_2015.pdf. Zodiac Arts - Moon Phase Calendar for Eastern Time. This is a great time to rewrite and edit, rework an old project or successfully repeat a task. 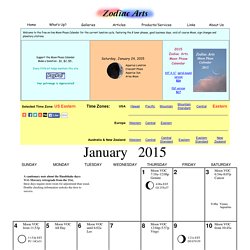 Reevaluate and reconsider, but hold final decisions and approvals until Mercury goes direct. The tendency is to initialize or finalize projects prematurely. The contents of verbal or written contracts and plans made now may later seem inadequate or unclear. This is not a good time to buy on the spur of the moment without investigation. This is also not a good time to purchase electronic equipment or cars.

Double-check and reconfirm every detail. Void of course Moon periods - definition, explanations, benefits, details, calculations. Definition The term VOID OF COURSE refers to the condition of the Moon between the moment it performed the last major aspect with another planet in its current sign and the moment of stepping into the next sign. 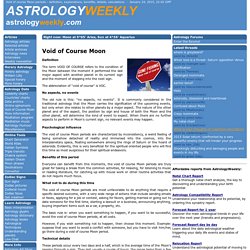 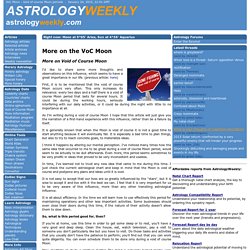 (previous article: here) First, it is to be mentioned that the void of course Moon occurs very often. This only increases its relevance: every two days and a half there is a void of course Moon period that lasts for several hours. It could be during the working hours, seriously interfering with our daily activities, or it could be during the night with little to no importance at all. As I'm writing during a void of course Moon I hope that this article will just give you the narration of a first-hand experience with this influence, rather than be a failure by itself.

VoC Moon 2014 - Void of course Moon periods in 2014 - Find Your Fate. The Moon makes a complete circle through the twelve zodiac signs every 28.5 days and spends approximately 2.5 days in each sign. 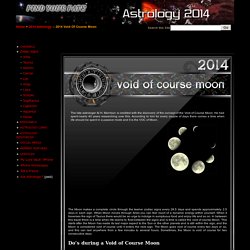 When Moon moves through Aries you can feel much of a dynamic energy within yourself. When it traverses the sign of Taurus there would be an urge to indulge in sumptuous food and enjoy life and so on. Astrology Calendar. Lunar Cycles Graph. The current month's Moon cycles are presented here. 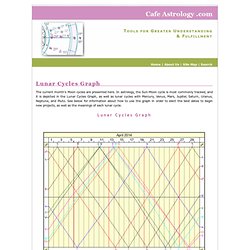 In astrology, the Sun-Moon cycle is most commonly tracked, and it is depicted in the Lunar Cycles Graph, as well as lunar cycles with Mercury, Venus, Mars, Jupiter, Saturn, Uranus, Neptune, and Pluto. See below for information about how to use the graph in order to elect the best dates to begin new projects, as well as the meanings of each lunar cycle. Lunar Cycles Graph Monthly Lunar-Planetary Cycles Most people are familiar with the lunation cycle that forms the basis of our months. Were you born on a Full Moon? Throughout the history of the Earth, the Moon has been a major influence on the evolution of the land, ocean and life. 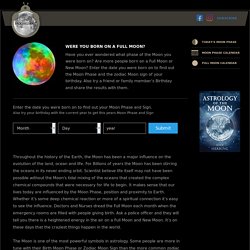 For Billions of years the Moon has been stirring the oceans in its never ending orbit. Scientist believe life itself may not have been possible without the Moon's tidal mixing of the oceans that created the complex chemical compounds that were necessary for life to begin. It makes sense that our lives today are influenced by the Moon Phase, position and proximity to Earth. Whether it’s some deep chemical reaction or more of a spiritual connection it’s easy to see the influence. Doctors and Nurses dread the Full Moon each month when the emergency rooms are filled with people giving birth. Eclipses of the Sun & Moon Worldwide. Moon phases for UTC in year 2010.