An Alien observer: Was the Moon set in place 4.53 billion years ago? The Moon used to rotate at a faster rate in the distant past, and for some reason, its rotation slowed down and became tidally locked with Earth. 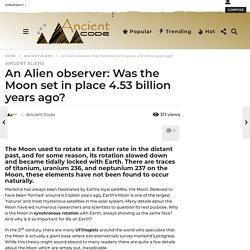 There are traces of titanium, uranium 236, and neptunium 237 on the Moon, these elements have not been found to occur naturally. CONTACTEE CLAIMS OUR MOON IS ARTIFICIAL AND WAS BROUGHT HERE FROM ANOTHER GALAXY. Were We On the Moon in 2309 B.C. - Locklip. That’s No Moon — It’s an Alien Observatory Created to Keep an Eye on Us! Sure, claiming the Moon is artificial might sound crazy, but why does it ring like a bell when struc... 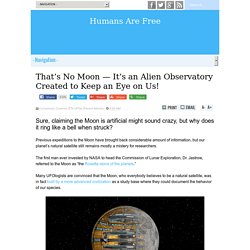 Sure, claiming the Moon is artificial might sound crazy, but why does it ring like a bell when struck? Previous expeditions to the Moon have brought back considerable amount of information, but our planet’s natural satellite still remains mostly a mistery for researchers. NASA's 1986 Challenger Team is Still Alive — They Haven't Even Bothered Hiding. NASA is a Fake Agency — Short Introduction by Alexander Light, HumansAreFree.com The more I l... 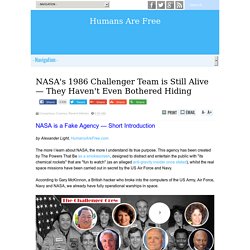 NASA is a Fake Agency — Short Introduction by Alexander Light, HumansAreFree.com The more I learn about NASA, the more I understand its true purpose. This agency has been created by The Powers That Be as a smokescreen, designed to distract and entertain the public with "its chemical rockets" that are "fun to watch" (as an alleged anti-gravity insider once stated), whilst the real space missions have been carried out in secret by the US Air Force and Navy. According to Gary McKinnon, a British hacker who broke into the computers of the US Army, Air Force, Navy and NASA, we already have fully operational warships in space. At least six of the seven crew members of STS-51 are still alive today, thriving in their newly found careers. China Reveals That a Massive Alien Outpost and Mining Facility is Operating on the Moon (Video) China is revealing what NASA has deliberately kept secret for many years. 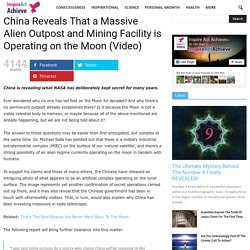 Ever wondered why no one has set foot on the Moon for decades? And why there’s no permanent outpost already established there? Is it because the Moon is not a viable celestial body to harness, or maybe because all of the above mentioned are already happening, but we are not being told about it? The answer to these questions may be easier than first anticipated, but complex at the same time. Dr. Beware of the FAKE Stanley Kubrick confession - Here are the outtakes (Flat Earth) 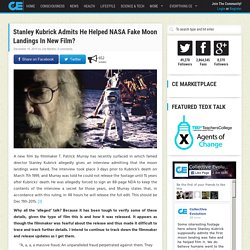 Patrick Murray has recently surfaced in which famed director Stanley Kubrick allegedly gives an interview admitting that the moon landings were faked. The interview took place 3 days prior to Kubrick’s death on March 7th 1999, and Murray was told he could not release the footage until 15 years after Kubricks’ death. He was allegedly forced to sign an 88-page NDA to keep the contents of the interview a secret for those years, and Murray states that, in accordance with this ruling, in 48 hours he will release the full edit. This should be Dec 11th 2015. [3] Russian Government Calls For International Investigation Into U.S. Moon Landings & For Good Reasons. There are articles floating around the internet suggesting that the Russian government has claimed that America never landed on the moon. 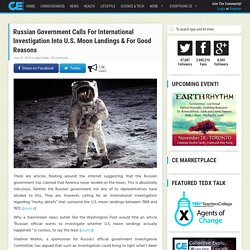 This is absolutely ridiculous. Neither the Russian government nor any of its representatives have alluded to this. They are, however, calling for an international investigation regarding “murky details” that surround the U.S. moon landings between 1969 and 1972. (source) Why a mainstream news outlet like the Washington Post would title an article “Russian official wants to investigate whether U.S. moon landings actually happened ” is curious, to say the least (source) Vladimir Markin, a spokesman for Russia’s official government Investigative Committee, has argued that such an investigation could bring to light what’s been kept in the dark for a number of years with regards to these trips into outer space. U.S. Defence Physicist Spills The Beans On What’s Really Happening On The Moon. I’m skeptical about many things, including the notion that government always knows best, and that the people can’t be trusted with the truth. 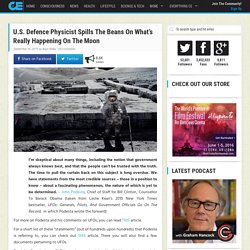 The time to pull the curtain back on this subject is long overdue. We have statements from the most credible sources – those in a position to know – about a fascinating phenomenon, the nature of which is yet to be determined. – John Podesta, Chief of Staff for Bill Clinton, Counsellor To Barack Obama (taken from Leslie Kean’s 2010 New York Times bestseller, UFOs: Generals, Pilots, And Government Officials Go On The Record, in which Podesta wrote the forward) For more on Podesta and his comments on UFOs, you can read THIS article. For a short list of these “statements” (out of hundreds upon hundreds) that Podesta is referring to, you can check out THIS article. There you will also find a few documents pertaining to UFOs. Dr. U.S. Defence Physicist Spills The Beans On What’s Really Happening On The Moon. This Is Why We Never Went Back To The Moon. (Before It's News) in5d.com by Dan Eden “I believe that this nation should commit itself, before this decade is out, of landing a man on the moon and returning him safely to the earth… no single space project in this period will be more impressive to mankind or more important for the long range exploration of space.” 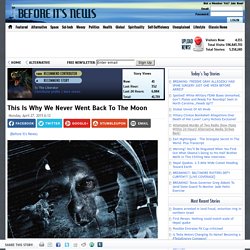