Your Weight on Other Worlds Exploratorium 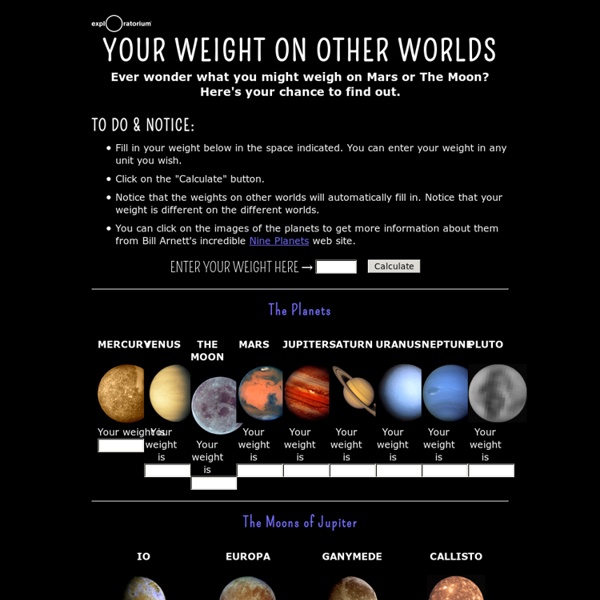 Ever wonder what you might weigh on Mars or The Moon? Here's your chance to find out. <div class="js-required"><hr> This Page requires a Javascript capable browser <hr></div> Fill in your weight below in the space indicated. You can enter your weight in any unit you wish. Click on the "Calculate" button. Mass and Weight Before we get into the subject of gravity and how it acts, it's important to understand the difference between weight and mass. We often use the terms "mass" and "weight" interchangeably in our daily speech, but to an astronomer or a physicist they are completely different things. Weight is an entirely different thing. If you are in a spaceship far between the stars and you put a scale underneath you, the scale would read zero. The Relationship Between Gravity and Mass and Distance As stated above, your weight is a measure of the pull of gravity between you and the body you are standing on. The two "M's" on top are your mass and the planet's mass. Isaac Newton

New 2013 Phases of the Moon Animation Released A new animation highlighting the phases of the Moon has been released by the Scientific Visualization Studio at NASA Goddard Space Flight Center in Greenbelt, Md. The animation shows at hourly intervals, the geocentric phase, libration, position angle of the Moon's axis, and apparent diameter of the Moon throughout the year 2013. Topographic measurements by the Lunar Orbiter Laser Altimeter aboard the Lunar Reconnaissance Orbiter make it possible to simulate shadows on the Moon's surface with unprecedented accuracy and detail. "Thanks to Lunar Reconnaissance Orbiter, we now have excellent terrain maps of the Moon that can tell us the elevation at any point on the surface," said Ernie Wright, author of the new video from the Scientific Visualization Studio (SVS). "I use those maps to make the Moon sphere bumpy in all the right places.

Women's History Month Astronauts Sally Ride and Kathyrn Sullivan Photo Credit: NASA Science NetLinks and AAAS have developed a number of resources that will help you honor the achievements and scientific work of women. Consider using the following resources in your classroom. AutoStitch AutoStitch works from unordered collections of images, automatically finding matches between images using the SIFT algorithm. It then robustly aligns all images and uses advanced blending algorithms to form seamless panoramas (see below). For more details, see our research papers. Your Sky by John Walker Welcome to Your Sky, the interactive planetarium of the Web. You can produce maps in the forms described below for any time and date, viewpoint, and observing location. If you enter the orbital elements of an asteroid or comet, Your Sky will compute its current position and plot it on the map.

The Moon - Facts About The Moon For Kids the Moon was probably made 4.5 billion years ago when a large object hit the Earth and blasted out rocks that came together to orbit round the Earth. They eventually melted together, cooled down and became the Moon. For another 500 million years pieces of rock kept striking aginst the surface of the Moon. You can see the surface of the Moon by using a pair of binoculars or a small telescope. Penrod - Sixth Grade Science pHet-analysis-sheet.docx There are three important pieces to your child's education: student, parent, teacher, with the STUDENT being the most important piece of this puzzle. When the three pieces work together as a team, the student may attain the best education possible. Your Age on Other Worlds Want to melt those years away? Travel to an outer planet! <div class="js-required"><hr> This Page requires a Javascript capable browser <hr></div> Fill in your birthdate below in the space indicated. (Note you must enter the year as a 4-digit number!)

The Space Shuttle Since 1981, NASA space shuttles have been rocketing from the Florida coast into Earth orbit. The five orbiters — Columbia, Challenger, Discovery, Atlantis and Endeavour — have flown more than 130 times, carrying over 350 people into space and travelling more than half a billion miles, more than enough to reach Jupiter. Designed to return to Earth and land like a giant glider, the shuttle was the world's first reusable space vehicle. Science Starters Science A to Z A, B, C, D, E, F, G, H, I, J-K, L, M, N, O, P, Q, R, S, T, U-W, X-Z Other Scrambles: Year of Science (This is the first starter I do each year.) Name the Ologist Set 1, Set 2, Set 3, Set 4, Set 5 Science Trivia Set 1, Set 2, Set 3, Set 4, Set 5, Set 6, Set 7, Set 8, Set 9, Set 10, Set 11 NOTE: These starters were submitted by Sharon Stone.