What is a 'supermoon' and what is the best time to see it on Sunday? Traces of another world found on the Moon. 5 June 2014Last updated at 14:00 ET By Pallab Ghosh Science correspondent, BBC News. 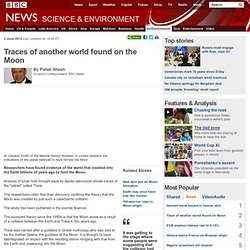 Dating the collision that formed the Moon using late-arriving debris. When did the Earth actually form? 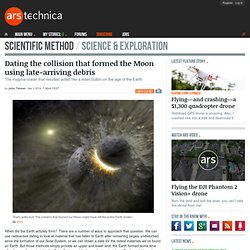 There are a number of ways to approach that question. We can use radioactive dating to look at material that has fallen to Earth after remaining largely undisturbed since the formation of our Solar System, or we can obtain a date for the oldest materials we've found on Earth. The Moon is layered in dust bathed in radiation, which could prove deadly for pioneers. By Eddie Wrenn Published: 15:16 GMT, 13 July 2012 | Updated: 14:46 GMT, 16 July 2012 Earth's friend, man's enemy: Moon-dust is expected to be very harmful to man as it is ultra-fine and doused in UV radiation Living on the moon is surely humanity's goal as we make our first baby steps into space. But our constant neighbour may not treat us so well - for scientists now think that the very dust on our luna partner is poisonous to humans. The surface of the moon is coated in a layer of thick, undisturbed dust, which is not only ultra-fine - and therefore easy to inhale - but can increase the risk of various cancers, similar to breathing asbestos and volcanic ash.

Humans have only spent, at max, two or three days on the moon in total, and this time has often been spent in spaceships or airtight suits. But with long-term exposure, the team says that inhalation would be harmful - even when wearing protective gear, as dust trails the astronauts back into living quarters. ...And it's everywhere! Why Wednesday's Full Moon Eclipse Won't Cause Madness. This week, lucky viewers will see the full moon darken as a penumbral lunar eclipse graces the sky. 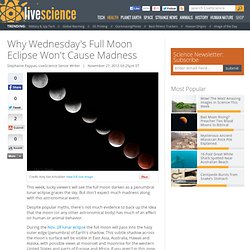 But don't expect much madness along with this astronomical event. Despite popular myths, there's not much evidence to back up the idea that the moon (or any other astronomical body) has much of an effect on human or animal behavior. During the Nov. 28 lunar eclipse the full moon will pass into the hazy outer edge (penumbra) of Earth's shadow. This subtle shadow across the moon's surface will be visible in East Asia, Australia, Hawaii and Alaska, with possible views at moonset and moonrise for the western United States and parts of Europe and Africa. If you aren't in this zone, you may feel a bit mad (though you can watch a webcast), but know that your frustration is likely the only link between the moon and madness. Moon Master: An Easy Quiz for Lunatics For most of human history, the moon was largely a mystery. This quiz is purposely a pretty easy one — see how you do! Moon's battered past revealed in incredible images. 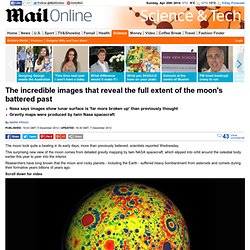 This surprising new view of the moon comes from detailed gravity mapping by twin NASA spacecraft, which slipped into orbit around the celestial body earlier this year to peer into the interior. Researchers have long known that the moon and rocky planets - including the Earth - suffered heavy bombardment from asteroids and comets during their formative years billions of years ago. Scroll down for video. Lunar Eclipse Webcasts: Watch Online. Editor's Note: The Slooh webcast of today's eclipse has been canceled due to bad weather at the observation sites. 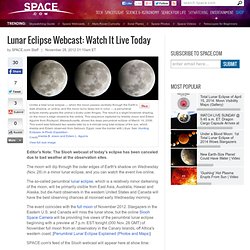 The moon will dip through the outer edges of Earth's shadow on Wednesday (Nov. 28) in a minor lunar eclipse, and you can watch the event live online. The so-called penumbral lunar eclipse, which is a relatively minor darkening of the moon, will be primarily visible from East Asia, Australia, Hawaii and Alaska, but die-hard observers in the western United States and Canada will have the best observing chances at moonset early Wednesday morning. Moon Dust Discovered In California Lab. Featured May 27, 2013 by editor redOrbit Staff & Wire Reports - Your Universe Online Roughly four decades after mysteriously disappearing, vials of Moon dust collected by Apollo 11 astronauts Neil Armstrong and Buzz Aldrin have been discovered at the Lawrence Berkeley National Laboratory in California. 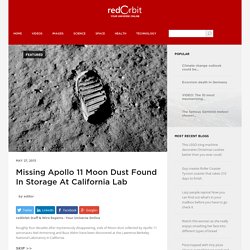 Twenty vials containing handwritten labels dated “24 July 1970” were discovered earlier this month by a local archivist named Karen Nelson, according to Slashgear´s Cory Gunther. The vials, which had been placed in vacuum-sealed glass jars, contained Moon dust returned to Earth by the first men to walk on the lunar surface, Gunther said. Also discovered by Nelson, according to Edward Moyer of CNET, was an academic paper entitled “Study of carbon compounds in Apollo 11 and Apollo 12 returned lunar samples” and was published in the Proceedings of the Second Lunar Science Conference in 1971. Nelson told reporters that she has contacted NASA to let them know about the samples. A Rocky Relationship: Is the Moon Leaving the Earth? The Earth-Moon system via NASA. 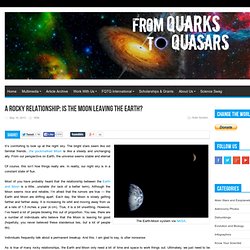 It’s comforting to look up at the night sky. The bright stars seem like old familiar friends…the pockmarked Moon is like a steady and unchanging ally. From our perspective on Earth, the universe seems stable and eternal Of course, this isn’t how things really are. In reality, our night sky is in a constant state of flux. Most of you have probably heard that the relationship between the Earth and Moon is a little…unstable (for lack of a better term).

Individuals frequently talk about a permanent breakup. As is true of many rocky relationships, the Earth and Moon only need a bit of time and space to work things out. …of course, the Sun is going to turn into a Red Giant in about 5 billion years, and many scientists believe that it will consume our planet in the process. Jolene Creighton Jolene is a freelance science writer; she also teaches at the University of Southern Mississippi where she focuses on Ecocriticism and Environmentalism. Dating the collision that formed the Moon using late-arriving debris.