Cheesecake in a Jar Recipe 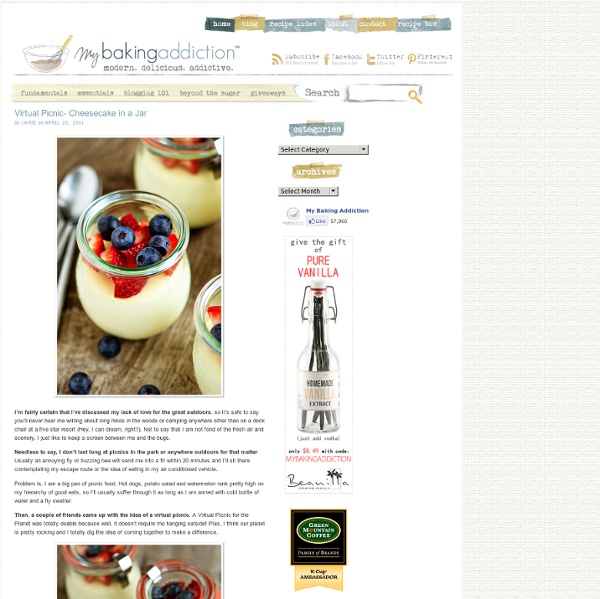 I’m fairly certain that I’ve discussed my lack of love for the great outdoors, so it’s safe to say you’ll never hear me writing about long hikes in the woods or camping anywhere other than on a deck chair at a five star resort (Hey, I can dream, right?). Not to say that I am not fond of the fresh air and scenery, I just like to keep a screen between me and the bugs. Needless to say, I don’t last long at picnics in the park or anywhere outdoors for that matter. Usually an annoying fly or buzzing bee will send me into a fit within 20 minutes and I’ll sit there contemplating my escape route or the idea of eating in my air conditioned vehicle. Problem is, I am a big pan of picnic food. Hot dogs, potato salad and watermelon rank pretty high on my hierarchy of good eats, so I’ll usually suffer through it as long as I am armed with cold bottle of water and a fly swatter. Then, a couple of friends came up with the idea of a virtual picnic. Eat Smart Eat Local Eat Sustainably Eat Green Eat Out

new york cheesecake New Yorkers have a reputation for being pushy and over-the-top — these are things you learn when you leave the city for a weekend, and a ticketing agent at the airport in Tulsa, for example, informs you that you’re so much more polite than she thought a New Yorker would be. We apparently like things bolder and taller and shinier and more intense and while I’m not sure if this really applies to your average straphanger commuting from walk-up to cubicle and back again everyday, I am absolutely certain that it applies to our cheesecakes. (No, the other kind, silly.) How is a New York Cheesecake unlike any other cheesecake? To begin, it’s very very tall. Most cheesecakes — like my Bourbon Pumpkin, Cappuccino Fudge, Key Lime and a Brownie Mosaic riff — use 3 bricks of cream cheese; this uses 5.

Delicious Hot Chocolate I love hot chocolate and really can’t be trusted around it. Here are a few varieties I whipped up recently. (If you’d like a late-afternoon/adult version, splash brandy or other booze into any of the varieties below.) (But you didn’t hear that from me.) Add 2 cups of milk and 2 cups of half-and-half to a small saucepan. As you can see, this wasn’t my first batch of hot chocolate that day. strawberry summer cake It is not summer yet. In fact, it’s been raining for more than a week, and another week — the one in which I presume we’ll be introduced to our new mosquito overlords — is promised. In fact, it was so cold that I met a friend for lunch today and had to wear both a light wool sweater and a jacket. It’s almost like summer looked at New York City and said “pbbbblt!” But I know it’s coming. I know it’s coming because strawberries appeared at the Greenmarkets last week and if you think I dork out pretty badly when the first asparagus stalks appear, you ain’t seen nothing like my “the strawberries are here!”

two-ingredient maple soufflé I know, I know. You read that post title and thought to yourself, Katy is clearly messing with us this morning. And then you thought, Seriously, Katy? pumpkin cupcakes Oh, people. I know you’re pumpkin-ed out and it is not even Thanksgiving yet. But if there could be room in your gullet for one more pumpkin love — perhaps even as a last minute, the-heck-with-pie, Hail Mary pass of a Thanksgiving meal dessert — I think that these wee cakes are a worthy cause. So many pumpkin cakes and loaves and muffins are heavy, playing off the dense qualities of pureed squash, and the deep, warm spices we like to eat them with.

Cake Batter Protein Shake If you’ve ever been to Coldstone Creamery, chances are you have tried (or at least heard about) the cake batter ice cream! In fact, it happens to be my husband’s favorite ice cream in the world. One day when I was making my hubby a protein shake, I decided to do make a protein packed version of his favorite ice cream flavor. This shake is thick and creamy enough to eat with a spoon, and it tastes just like cake batter ice cream! Have a ‘party’ for breakfast or post-workout with this Cake Batter Protein Shake! Individual Peanut Butter Pies This is not going to be a typical post on My Baking Addiction. It’s more of a reminder to take a moment to hug those you love a little tighter. Last Sunday, food writer, Jennifer Perillo lost her husband, Mikey to a sudden heart attack. Word spread of Jennie’s tremendous loss through social media. I don’t know Jennie personally, simply through our brief emails and tweets – but I sat at my desk feeling heartbroken and helpless.

How to Make a Pumpkin Spice Latte How to Make a Pumpkin Spice Latte I’m excited about my recipes this week. That doesn’t really tell you all that much since I’m excited about new recipes every week… but this week I’m particularly excited. Why is that, you ask? Red Velvet Cheesecake Cake If you’ve ever been to The Cheesecake Factory, and if you’re a Red Velvet Cake Fan… you’ve probably ordered up the Red Velvet Cheesecake Cake. It’s kind of the most amazing thing ever… a red velvet layer-cake with a layers of cheesecake mixed in… topped with cream cheese icing. Here’s a little video showing you how this cake is assembled: Today, I’m reviewing Camilla Saulsbury’s cookbook: Piece of Cake. It’s a terrific book of one-bowl cake recipes– every kind you can imagine. Since red velvet cake is featured on the cover of Camilla’s book, I thought I’d take that recipe and re-create the Red Velvet Cheesecake Cake from The Cheesecake Factory.

Anti-candida, Sugar-Free, Gluten-Free, Vegan Granola Cookie Recipe [A plate of detox-friendly cookies! In the background, the ailing azalea plant my cousin gave me. Any advice on how to keep it alive?] Are you a fan of granola? For most of us, the mix of (usually) oats, nuts, seeds and raisins or dates is very alluring. I must admit, however, that I first ate granola in my 20s, and then only for a few weeks before eschewing it entirely until my 40s. Web’s Tastiest: Pancakes Recipes Everyone knows that breakfast is the most important meal of the day. So of course you want to get off to a good, healthy start. However, anyone with kids knows that some mornings are just too special to worry about a properly balanced meal. Spending time in the kitchen as a family, whipping up something absolutely decadent and definitely too sweet, is the stuff that memories are made of. The Web’s Tastiest Pancake Recipes are here to turn Saturday into Whattaday! Cinnamon Roll Pancakes