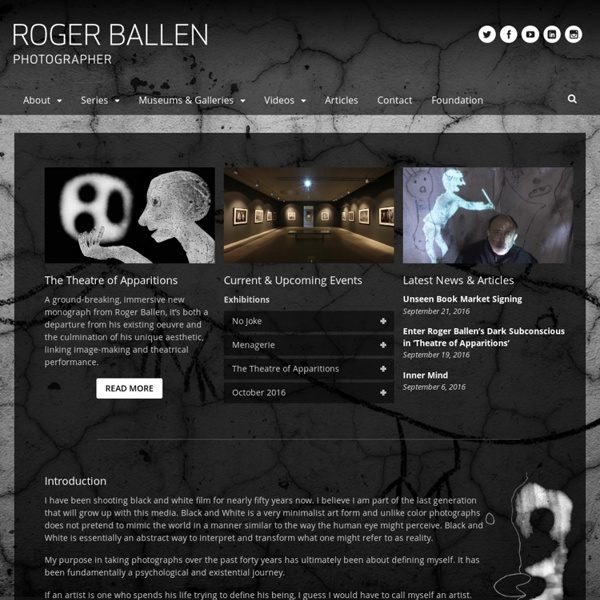 I have been shooting black and white film for nearly fifty years now. I believe I am part of the last generation that will grow up with this media. Black and White is a very minimalist art form and unlike color photographs does not pretend to mimic the world in a manner similar to the way the human eye might perceive. Black and White is essentially an abstract way to interpret and transform what one might refer to as reality. My purpose in taking photographs over the past forty years has ultimately been about defining myself. It has been fundamentally a psychological and existential journey.

Ansel Adams Ansel Easton Adams (February 20, 1902 – April 22, 1984) was an American photographer and environmentalist. His black-and-white landscape photographs of the American West, especially Yosemite National Park, have been widely reproduced on calendars, posters, and in books.[1] With Fred Archer, Adams developed the Zone System as a way to determine proper exposure and adjust the contrast of the final print. The resulting clarity and depth characterized his photographs. Tales Of The Old Bathtub: My Wife And Kids Take Part In Creating Surreal Stories My name is Sebastian Luczywo and I live in Poland. I’ve been an amateur photographer for three years now. I look at photography as my hobby and a way to communicate to the world the stories that come to my mind. I get my inspirations from old photographs that are always full of content.

Roger Ballen In the fall of 2005, Phaidon press produced its second book by the artist, entitled 'Shadow Chamber'.[2] The book focuses on interactions between people, animals, and/or objects. Ballen’s recent work enters into a new realm of photography — the images are painterly and sculptural in ways not immediately associated with photographs.[3] Through collaboration on some of Die Antwoord's music videos, which have received more than 30 million hits on YouTube, Ballen's paintings and sculpture have gained broader exposure globally.[4][5] Yolandi Visser said about him: "Mr. Ballen is like, the weirdest person I've ever met in my life.

Annie Liebovitz Born in 1949 in Waterbury, Connecticut, Annie Leibovitz enrolled in the San Francisco Art Institute intent on studying painting. It was not until she traveled to Japan with her mother the summer after her sophomore year that she discovered her interest in taking photographs. When she returned to San Francisco that fall, she began taking night classes in photography. Time spent on a kibbutz in Israel allowed her to hone her skills further. In 1970 Leibovitz approached Jann Wenner, founding editor of Rolling Stone, which he’d recently launched and was operating out of San Francisco. Impressed with her portfolio, Wenner gave Leibovitz her first assignment: shoot John Lennon.

Annie Liebovitz January 3rd, 2007 Annie Leibovitz Photo Gallery Get access to content from your local PBS station.Get sneak previews from some of your favorite shows including Masterpiece, Nova, etc.See what's on tonight at your local PBS station. Kento Mizuno Kento Mizuno’s keen eye, skill, and passion for capturing nature are far beyond his years. A senior at The Bay School of San Francisco, Mizuno has already interned with a National Geographic photographer and won several nature photography awards including a high school scholarship sponsored by the North American Nature Photography Association (NANPA). His photographs are featured in private collections in Paris, New York, and San Francisco. In this interview with Photoshop.com, he shares feelings about photography and his creative process. Photoshop.com: What piece of equipment can’t you live without and why?

Interview: Magical Insect Photographer When we first came across Nadav Bagim's macro insect photography, we were taken aback by just how magical he could make their miniature world look. His photos seemed like they came out of a storybook or a Disney/Pixar movie. Filled with beautiful colors and a generous helping of bokeh, they seemed almost out of this world. After we found out that he only uses Photoshop for slight tweaks, we were even more impressed. The Playground ‹ Felicia Simion Photography Confronting the end of childhood as I know it, followed by the beginning of my so-called “adulthood”, has been much easier with my 5-year-old cousin, Felix, around. He is growing up in a small village in Romania, which many generations from my family have called home throughout their lives. Felix is developing himself in a traditional spirit, playing in the sand instead of using a tablet, being happy just by swimming in a small supermarket pool, riding the bike and gazing at the Milky Way, undisrupted by car lights and drunk lamps. At 19-years-old I discovered that there is a way back from gradually becoming an adult and losing our raw, unaltered spirit. I decided to join Felix in his games, where I would be the photographer, the story-teller, and he would act like various characters – a blonde little girl, a dog between dogs, a self-proclaimed cowboy – free from any kind of constraints. Project exhibited during the La Quatrieme Image festival in Paris, November 2014.

Forget Vladimir Putin's Olympic Fantasy and Check Out the Real Sochi By now, you may have heard that the upcoming Winter Olympics in Sochi, Russia, is a shitshow. With its $51 billion price tag, Russia's LGBT crackdown, reports of forced eviction, unlawfully detained migrant laborers, rampant embezzlement, and environmental degradation—it's been the PR equivalent of herpes. What you may not know is that Sochi itself lies on the doorstep of long-simmering ethnic and territorial conflicts. Just across the mountains from the Olympic Village is the North Caucasus, a chain of seven autonomous republics that are home to more than 30 nationalities and as many languages. It's a volatile region roamed by separatist groups, Islamic Salafists, and terrorists-in-training.

Amy's FAQs - Matt Moyer & Amy Toensing As a kid, I was obsessed with this book “The Family of Woman”. It’s a compilation of black and white photographs that tells the story of womanhood. It’s the feminine story of humanity; it has no borders in terms of race, politics or geography. I could never get enough of it and eventually the cover fell off and pages slipped out.

Jose Luis Barcia Fernandez - En Sombra // In Shadow Jose Luis Barcia Fernandez is one of the 31 winners and finalists of the LensCulture Street Photography Awards 2015! LensCulture is proud to present the work of these photographers who show us, each in their own way, why street photography today remains as fresh and vibrant as ever! I focus my photography on people, light and shadow. In "En Sombra," you will find 20 black and white candid street photos, with vivid geometry, strong juxtapositions and high-contrast lighting, taken and edited only with mobile phones. I think music is my main inspiration.

Zenith owners manual Zenith EM HTML Translations - German - Italian - French - Spanish - OthersThese links will not translate any PDF filesThis camera manual library is for reference and historical purposes, all rights reserved.This page is copyright by , M. Butkus, NJ.This page may not be sold or distributed without the expressed permission of the producerI have no connection with Chinon Co., Japan On-line camera manual libraryThis is the full text and images from the manual.