Calle, Sophie : Photography, History. The daughter of a prestigious doctor and art collector, Sophie Calle, influenced by her father’s artistic entourage such as Man Ray or César, decides to pursue a creative career. 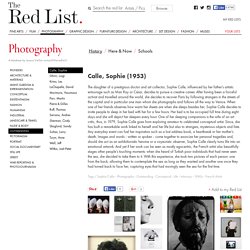 After having been a forceful activist and travelled around the world, she decides to recover Paris by following strangers in the streets of the capital and in particular one man whom she photographs and follows all the way to Venice. When one of her friends observes how warm her sheets are when she sleeps besides her, Sophie Calle decides to invite people to sleep in her bed with her for a few hours. Her bed is to be occupied full time during eight days and she will depict her sleepers every hour. Sherman, Cindy : Photography, History. The American photographer is noticed in the late 1970s when she begins capturing herself, clad in an arsenal of costumes, wigs and made up to incarnate various characters in intriguing tableaux, from little girls to clowns, celebrities such as Marilyn Monroe or Lucille Ball as well as art history subjects borrowed to Botticelli. 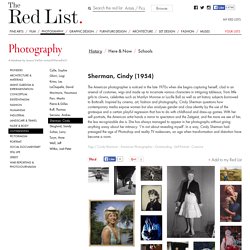 100 Most influential photographers of all time - The GROUND Magazine. © Richard Avedon 1. 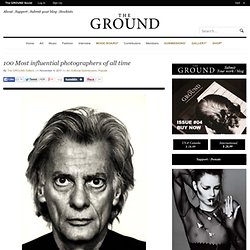 Richard Avedon American 1923-2004 Avedon was the epitome of the modern photographer – a charming, sophisticated man-about-town and a photographer who was able to cross photographic genres. It did not matter where he was, which format he chose to work with or who his subject was, the image would be an Avedon image. It would have that unmistakeable elegance and confidence that marked him out, not just as a great photographer but as a highly successful commercial photographer, who was able to create instantly iconic and memorable images. 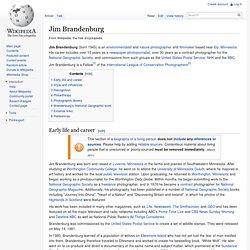 His career includes over 10 years as a newspaper photojournalist, over 30 years as a contract photographer for the National Geographic Society, and commissions from such groups as the United States Postal Service, NHK and the BBC. Jim Brandenburg is a Fellow[1] of the International League of Conservation Photographers[2] Early life and career[edit] Jim Brandenburg was born and raised in Luverne, Minnesota in the farms and prairies of Southwestern Minnesota. After studying at Worthington Community College, he went on to attend the University of Minnesota Duluth, where he majored in art history and worked for the local public television station. Brandenburg was commissioned by the United States Postal Service to create a set of wildlife stamps. In 1980, Brandenburg learned of a population of wolves on Ellesmere Island who had not yet had the fear of man instilled into them. Interview with Photographer Donna Ferrato. “This is, by far, the most powerful picture I’ve ever taken because it shows exactly how a child feels when they see their mother being beaten. 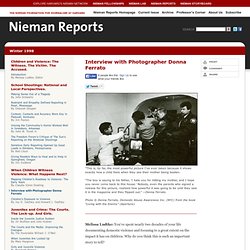 “The boy is saying to his father, ‘I hate you for hitting my mother, and I hope you never come back to this house.’ Nobody, even the parents who signed a release for this picture, realized how powerful it was going to be until they saw it in the magazine and they flipped out.” —Donna Ferrato. Photo © Donna Ferrato, Domestic Abuse Awareness Inc. (NYC) from the book “Living with the Enemy” (Aperture).

Melissa Ludtke: You’ve spent nearly two decades of your life documenting domestic violence and focusing to a great extent on the impact it has on children. Donna Ferrato: I see the children as the ones who suffer repercussions more strongly than the women do. Skott Chandler. Artist Bio Skott Chandler is a photographic artist from Southern Utah, currently living and working in Denver, Colorado. 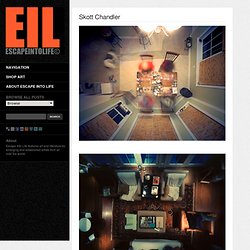 Skott came to photography late in his undergraduate career while studying studio art at Southern Utah University. During that time he experimented with the photographic medium, testing the limits of the ideals of photography. While at SUU, he received a UGRASP (Undergraduate Research and Scholarship Program) grant for his Photocubism series. Skott graduated from Southern Utah University as the Outstanding Graduate of Art and Design, and after graduation he decided to further pursue his photographic career in the MFA program at Savannah College of Art and Design.

Skott has exhibited work throughout the United States, as well as internationally in Hong Kong and Geneva, Switzerland. Artist Statement About the House Watch Series. Nan Goldin. Nan Goldin (1953) is an American fine-art and documentary photographer.She is represented by the Matthew Marks Gallery in New York.Boston.Goldin was born in Washington, D.C. and grew up in an upper-middle-class Jewish family in theAfter attending the nearby Lexington High School, she enrolled at the Satya Community School in Boston, where a teacher introduced her to the camera in 1968; Goldin was then fifteen years old. 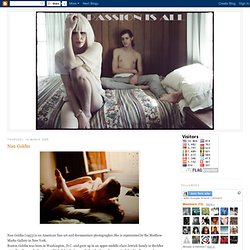 Her first solo show, held in Boston in 1973, was based on her photographic journeys among the city's gay and transsexual communities, to which she had been introduced by her friend David Armstrong.Goldin graduated from the School of the Museum of Fine Arts, Boston/Tufts Univercity in 1977/1978, where she had worked mostly with Cibachrome prints.Following graduation, Goldin moved to New York City.She began documenting the post-punk.She began documenting the post-Stonewall gay subculture of the late 1970s and early 1980s.