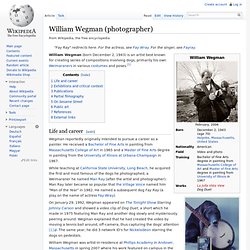 He received a Bachelor of Fine Arts in painting from Massachusetts College of Art in 1965 and a Master of Fine Arts degree in painting from the University of Illinois at Urbana-Champaign in 1967. While teaching at California State University, Long Beach, he acquired the first and most famous of the dogs he photographed, a Weimaraner he named Man Ray (after the artist and photographer). Man Ray later became so popular that the Village Voice named him "Man of the Year" in 1982. Taryn Simon photographs secret sites. The Amazing Lost Legacy of the British Black Panthers. While, in the mid-1960s, the Black Panthers – the famous, American, shotgun-toting ones – were scaring the crap out of white America, the British Black Panthers (BBP) were educating their communities and fighting discrimination. 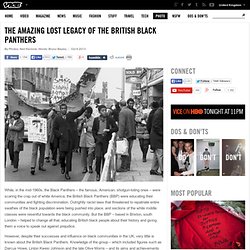 Outrightly racist laws that threatened to repatriate entire swathes of the black population were being pushed into place, and sections of the white middle classes were resentful towards the black community. But the BBP – based in Brixton, south London – helped to change all that, educating British black people about their history and giving them a voice to speak out against prejudice. However, despite their successes and influence on black communities in the UK, very little is known about the British Black Panthers.

Knowledge of the group – which included figures such as Darcus Howe, Linton Kwesi Johnson and the late Olive Morris – and its aims and achievements isn't aided by the fact that they only officially existed from 1968 till 1972. Photographer Tony Fouhse Collaborated with a Heroin Addict. Drug addicts seem to be the go-to subjects for raw-emotion-seeking photographers looking to try their hand at documentary photography. 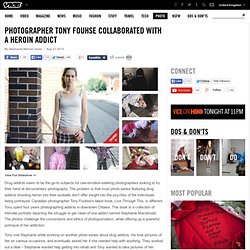 The problem is that most photo series featuring drug addicts shooting heroin into their eyeballs don't offer insight into the psyches of the individuals being portrayed. Canadian photographer Tony Fouhse's latest book, Live Through This, is different. Tony spent four years photographing addicts in downtown Ottawa. Athens Is a Paradise. Athens is currently one of the most surreal cities in Europe. 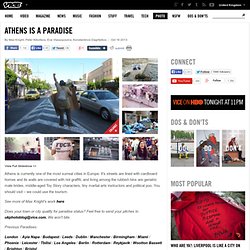 It's streets are lined with cardboard homes and its walls are covered with riot graffiti, and living among the rubbish bins are geriatric male brides, middle-aged Toy Story characters, tiny martial arts instructors and political poo. You should visit – we could use the tourism. See more of Max Knight's work here Does your town or city qualify for paradise status? Feel free to send your pitches to ukphotoblog@vice.com. Moscow Is a Paradise. It's easy to think of Moscow as a city of mausoleums, giant Lenin statues and propaganda art museums, but photographer Igor Baranchuk insists his hometown is about so much more than post-communist sadness. 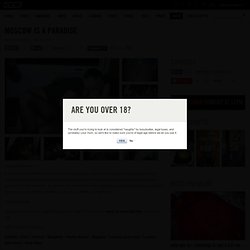 To prove it, he sent us this set of pictures of people passing out, making out and showing off their genitals in the city's streets and nightclubs. You should visit. Does your town or city qualify for paradise status? Feel free to send us your pitches. Moscow Is a Paradise - Part Two. Sasha Mademuaselle's favourite city is Moscow, which isn't all that surprising given it's where she was born and raised. 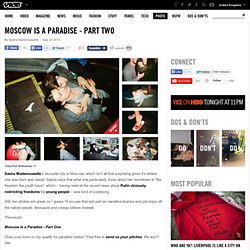 Sasha says that what she particularly loves about her hometown is "the freedom the youth have", which – having read all the recent news about Putin viciously restricting freedoms for young people – was kind of surprising. Still, her photos are great, so I guess I'll excuse that last part as narrative license and just enjoy all the naked people, dinosaurs and creepy tattoos instead.

Previously: Prague Is a Paradise. Prague doesn’t need a brochure to sell itself. 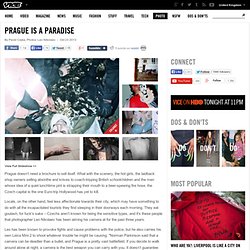 What with the scenery, the hot girls, the laidback shop owners selling absinthe and knives to coach-tripping British schoolchildren and the men whose idea of a quiet lunchtime pint is strapping their mouth to a beer-spewing fire hose, the Czech capital is the one Euro-trip Hollywood has yet to kill. Locals, on the other hand, feel less affectionate towards their city, which may have something to do with all the incapacitated tourists they find sleeping in their doorways each morning.

They eat goulash, for fuck's sake – Czechs aren’t known for being the sensitive types, and it's these people that photographer Leo Nikolaev has been aiming his camera at for the past three years. Lahti Is a Paradise. Lahti is a hard-up Finnish business town located on the southern bank of Lake Vesijärvi, about 60 miles from Helsinki. 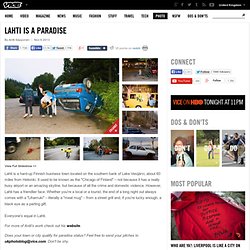 It used to be known as the "Chicago of Finland" – not because it has a really busy airport or an amazing skyline, but because of all the crime and domestic violence. However, Lahti has a friendlier face. 'Everyone, Everywhere in Tbilisi Is Drunk As Fuck All the Time' Giorgi Nebieridze is a Georgian photographer who currently lives in Berlin and enjoys taking unedited pictures of his "drug-addict friends" on colour film. 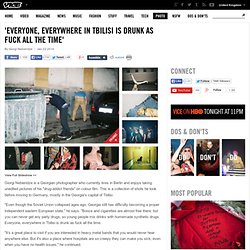 This is a collection of shots he took before moving to Germany, mostly in the Georgia's capital of Tbilisi. "Even though the Soviet Union collapsed ages ago, Georgia still has difficulty becoming a proper independent eastern European state," he says. "Booze and cigarettes are almost free there, but you can never get any party drugs, so young people mix drinks with homemade synthetic drugs. Detroit Is a Paradise. Detroit, along with the country's prison system, is one of America's more surreptitious concentration camps. 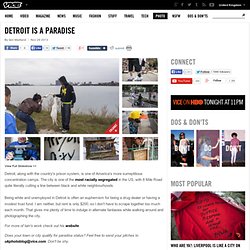 The city is one of the most racially segregated in the US, with 8 Mile Road quite literally cutting a line between black and white neighbourhoods. Being white and unemployed in Detroit is often an euphemism for being a drug dealer or having a modest trust fund. I am neither, but rent is only $200, so I don't have to scrape together too much each month. Seward, Alaska Is a Paradise. I was born and raised in the desert of New Mexico, but spent every summer with my wild grandpa up in Seward, Alaska. My grandfather moved there ten years ago to kick an addiction. Belfast Is a Paradise. Belfast is my home, the home of the joyrider and the petrol bomb and also has its very own riot season. Once terrorism capital of the world, Belfast can be beautiful but this beauty is unfortunately shrouded in occasional moments of madness that come in the form of bomb attacks, protests and tensions between Catholic and Protestant communities.

Here is a basic photo summary of what Belfast really looks like – not what those stupid tourist videos will tell you. Follow Conall on Instagram: @cocobongo666 Does your town or city qualify for paradise status? Feel free to send your pitches to ukphotoblog@vice.com. Chicago Is a Paradise. Chicago is a little understood city. More renowned for its crooked politics and oppressive violent crime than whatever the local tourist board tells you, the true essence of the city is barely known or appreciated by outsiders.

For over a century, Chicago has been home to a diverse collection of hustlers, radicals and eccentrics, all of whom have helped to give the "Paris of the Midwest" its unique cultural vernacular. Between 2010 and 2013 I walked Chicago's streets, documenting candid moments and building a picture of the city. Orlando Is a Paradise. Nachtgestalten, Bilder einer Szene. DOMANTE KAMINSKAITE PHOTOGRAPHY - Kelly Jade. Declan Mckenna Photography - Home. Photographer - Beauty. Lhfotography - About Me. Freelance photographer. Jordan Ramone. PHOTOGRAPHER.

Back to the Future: a profile of Argentinian photographer Irina Werning as she travels the world, intricately recreating old childhood photos. The Neglected: UNESCO award-winning photographer David Gillanders delivers the harrowing world of child drug addicts from the streets of Odessa, Ukraine. In Focus: Blind photographer Pete Eckert demonstrates how visual he is through his work and an unexpected exhibition in New York City.