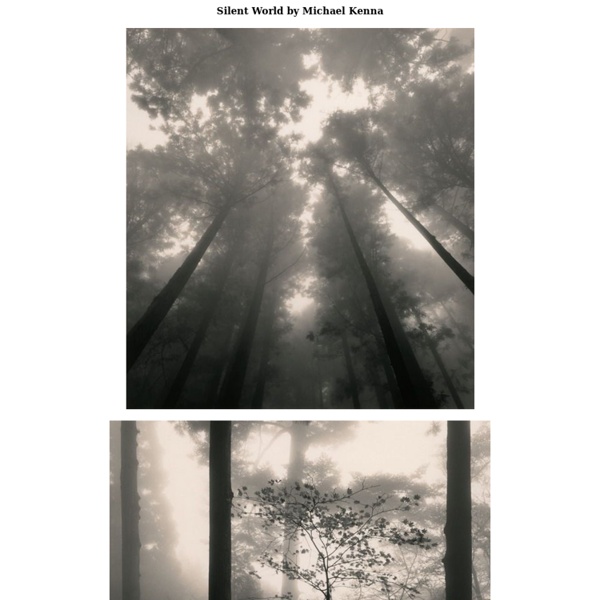 Animals' Eyes Up Close Husky Suren Manvelyan, is a bit of a jack of all trades. He has a PhD in Theoretical Physics specializing in Quantum Chaos but has recently turned his attention to photographing the amazing detailed landscapes of eyes. 25 Most Beautiful Animals Photography on StumbleUpon I think the most beautiful pictures are those made in nature. Nothing compares with the expression of a tiger, the majestic flight of an eagle or the strength of a white bear. Below you can see 25 the most beautiful animal photographs that will capture your attention, and were stumbled on StumbleUpon.

The rare beauty found within Google street view It is not often when browsing through Google street view that you come across anything of real beauty but Aaron Hobson has found some rather rare examples of what the Google car cam has caught while traveling around the world. Update: You can now see even more photos from the Google car cam here: The rare beauty found within google street view 2 National Geographic Photo Contest 2011 - Alan Taylor National Geographic is currently holding its annual photo contest, with the deadline for submissions coming up on November 30. For the past nine weeks, the society has been gathering and presenting galleries of submissions, encouraging readers to vote for them as well. National Geographic was kind enough to let me choose among its entries from 2011 for display here on In Focus. Gathered below are 45 images from the three categories of People, Places, and Nature, with captions written by the individual photographers. [45 photos] Use j/k keys or ←/→ to navigate Choose:

The most beautiful suicide On May 1, 1947, Evelyn McHale leapt to her death from the observation deck of the Empire State Building. Photographer Robert Wiles took a photo of McHale a few minutes after her death. The photo ran a couple of weeks later in Life magazine accompanied by the following caption: On May Day, just after leaving her fiancé, 23-year-old Evelyn McHale wrote a note. 'He is much better off without me ... World Press Photo Of The Year 2010 The World Press Photo Of The Year Contest is one of the most prestigious annual events for press photographers. These are the winners in 2010. Read the descriptions underneath each image to find out more about the setting and the photographer.Warning: Some images are graphic in displaying the horror that can be human life.UPDATE: Check out our World Press Photo Of The Year 2011 edition. 101. Daniele Tamagni, a freelance photographer based in Italy, has won the 2nd Prize in the Arts and Entertainment Stories category with the series The Flying Cholitas in Bolivia: Lucha libre (Bolivian wrestling). The prize-winning entries of the World Press Photo Contest 2010, the world's largest annual press photography contest, were announced February 11, 2011.

Animals Illuminated by the Sun The time of sunset is defined in astronomy as the moment when the trailing edge of the Sun’s disk disappears below the horizon in the west. There are few things in nature as photogenic as the sky at sunset, especially animals. The rich bright gold, pink and orange colors make unusually beautiful pictures of animals illuminated by the sun. Source 99 Excellent Examples of Forced Perspective Photography Forced perspective is a technique that employs optical illusion to make an object appear farther away, closer, larger or smaller than it actually is. It is used primarily in photography, filmmaking and architecture. It manipulates human visual perception through the use of scaled objects and the correlation between them and the vantage point of the spectator or camera. There are many ways to attack photography and some are much more expensive than others. Here in this showcase, we presenting a Stunning collection of Forced Perspective Photography and Pictures taken by various artists in which all pictures are linked to the author’s pages.

photography by Angus R Shamal A self portrait of Stanley Kubrick with his daughter, Jack Nicholson and the crew @ the set of The Shining. A selection of some of the most awesome Behind-the-scenes shots I’ve seen from some famous movies found at aintitcool.com. Back when set designs were huge and hand made, when special effects where mechanic and photographic and film stars were risking their lives on the set. on the set of Fritz Lang’s Metropolis — the actress inside the Maria robot taking a breather. The Empire Strikes Back - filming the Crawl. Rebel Without A Cause — James Dean, Natalie Wood and director Nicholas Ray.