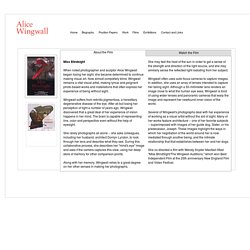 Now almost completely blind, Wingwall remains a vital visual artist, making lyrical and poignant photo-based works and installations that often express her experience of being without sight. Wingwall suffers from retinitis pigmentosa, a hereditary degenerative disease of the eye. After all but losing her perception of light a number of years ago, Wingwall discovered that a great deal of her experience of vision happens in her mind. The brain is capable of representing line, color and perspective even without the help of eyesight.

She rarely photographs all alone -- she asks colleagues, including her husband, architect Donlyn Lyndon, to look through her lens and describe what they see. Along with her memory, Wingwall relies to a great degree on her other senses in making her photographs. Wingwall often uses auto-focus cameras to capture images. 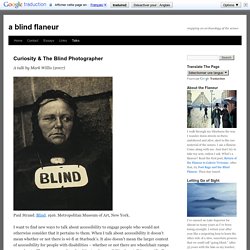 Blind. 1916. Metropolitan Museum of Art, New York. I want to find new ways to talk about accessibility to engage people who would not otherwise consider that it pertains to them. When I talk about accessibility it doesn’t mean whether or not there is wi-fi at Starbuck’s. This image by Paul Strand is my first milestone in talking about accessibility in terms of culture. Another haunting aspect of this image is the way in which the photograph was taken. To Photograph Is To See. Blind All Around the World. BlindSide: A Game for Players Who Can't See. Earlier this year, a minor injury to my right eye left me temporarily blind. 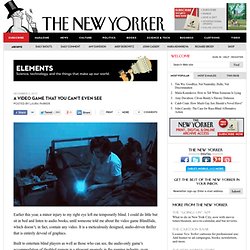 I could do little but sit in bed and listen to audio books, until someone told me about the video game BlindSide, which doesn’t, in fact, contain any video. It is a meticulously designed, audio-driven thriller that is entirely devoid of graphics. Built to entertain blind players as well as those who can see, the audio-only game’s accommodation of disabled gamers is a pleasant anomaly in the gaming industry, even though the number of gamers with disabilities is significant. The latest Americans with Disabilities report, which draws on 2010 census data, estimates that nearly fifty-seven million Americans, or roughly nineteen per cent of the population, have a disability, with over thirty-eight million suffering from what the report considers to be a “severe disability” of a physical, mental, or communicative nature. 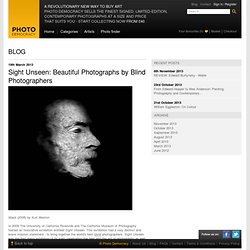 This exhibition had a very distinct and brave mission statement - to bring together the world's best blind photographers. Sight Unseen was the first major exhibition of its kind, celebrating the 'feel' and the act of photography as well as the visual outcomes. The pictures are undeniably excellent, and would be considered so, regardless of the artist's visual condition. Well, we can only deliberate. Connected (2006) by Michael Richard La convivencia de una frontera natural avasallada por el viento (A natural boundary subdued by the wind) (2000) by Gerardo Nigendia.

My blind spot, my students and me. "I was convinced that it was time to embrace my partial blindness and place it at the centre of my academic career," says Hannah Thompson. 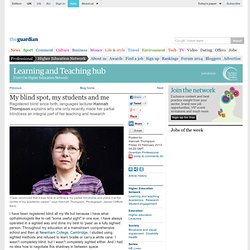 Photograph: James Clifford Kent. I have been registered blind all my life but because I have what opthalmologists like to call "some useful sight" in one eye, I have always operated in a sighted way and done my best to 'pass' as a fully sighted person. Throughout my education at a mainstream comprehensive school and then at Newnham College, Cambridge, I studied using sighted methods and refused to learn braille or carry a white cane. I wasn't completely blind, but I wasn't completely sighted either. And I had no idea how to negotiate this shadowy in between space.

Sophie Calle: Blind: Amazon.co.uk: Sophie Calle. No stranger to the art of staging and to the act of disclosure, Sophie Caile returns again here to the theme of autobiography and to the notion of the Other, revealing in all their difference and singularity those who have been blind since birth or who have gone blind following an accident. 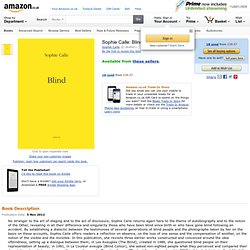 By establishing a dialectic between the testimonies of several generations of blind people and the photographs taken by her on the basis on these accounts, Sophie Caile offers readers a reflection on absence, on the loss of one sense and the compensation of another, on the notion of the visible and the invisible. Group Study of photographers with visual impairment « julia cameron photography. Images displayed in Fusion, the Forum, Norwich on a 24 metre wide screen. 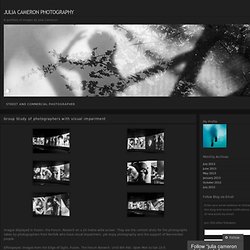 They are the context shots for the photographs taken by photographers from Norfolk who have visual impairment, yet enjoy photography and the support of like-minded people. Effstopeyes: Images from the Edge of Sight, Fusion, The Forum Norwich. Until 8th Feb. Open Mon to Sat 10-5.

Evgen Bavcar. How Blind Photographers Like Chris Holmes Are Overcoming The Odds To Produce Stunning Images.