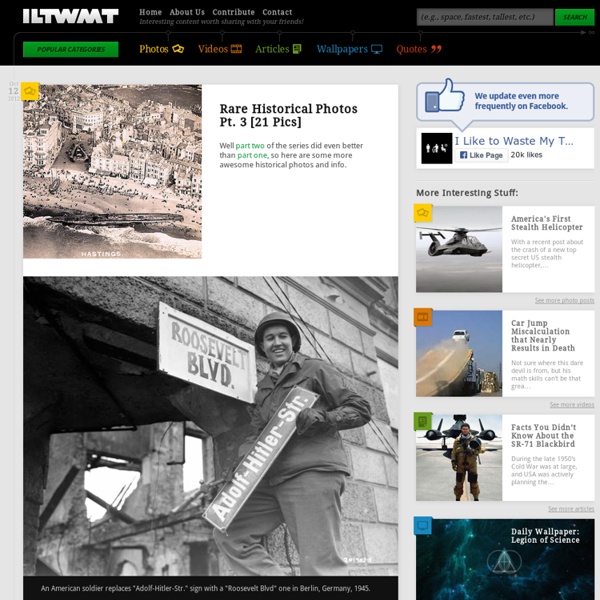 Rare Historical Photos Pt. 3 [21 Pics] Oct 12 2012 Well part two of the series did even better than part one, so here are some more awesome historical photos and info. An American soldier replaces "Adolf-Hitler-Str." sign with a "Roosevelt Blvd" one in Berlin, Germany, 1945. Microsoft staff. American soldiers discover Manet's “In the Conservatory” that was hidden (amongst other Nazi loot) in the salt mines of Merker, Germany. 1945. The assembly line of Porsche 911's at the Stuttgart factory. ~1970 One of the heaviest WW2 tanks ever created, the Tiger II. A different angle of the popular stand off between a man (top left in photo) and a column of Chinese Type 59 tanks (top right in photo) on Tiananmen Square. Princeton students after a Freshman / Sophomore snowball fight. Martin Luther King Jr. removing a burned cross from his front yard. 39th Tomsk infantry regiment with their motorcycle-mounted machine guns during WW1, Russia. The original Ronald clown of McDonald's. 1963. Oct 2 2012 View Post Related:  History in Photos

Rare Historical Photos Pt. 2 [19 Pics] Rare Historical Photos Pt. 2 [19 Pics] Oct 2 2012 Our first post highlighting rare photos was quite successful (1,300 views). During the Apollo 16 mission, Charles Duke left a family photo on the moon that was enclosed in a plastic bag. Vought F4U Corsair crashes on the deck of a carrier when the arresting gear failed. John F. The following photo is believed to be the last photo ever taken of the RMS Titanic before it sunk in April 1912. 1884 De Dion, Bouton et Trepardou Dos-à-Dos is the oldest running car on the planet. This photo was taken in space right after World War II (1946). Douglas MacArthur signing the official Japanese surrender instrument aboard the USS Missouri, 1945. Hitler inspecting the massive 800mm “Schwerer Gustav” railway gun from afar. George S. Joseph Goebbels on his wedding day. George Armstrong Custer and some of his fellow soldiers, during the American Civil War. Howard Carter, an English archaeologist, examining the opened sarcophagus of King Tut. Walt and Roy O.

22 Rare Historical Photos 22 Rare Historical Photos Jul 6 2012 Take a look at this collection of rare photos that is sure to blow you away! Charles Godefroy taking his Nieuport 11 “Bébé” through the Arc de Triomphe in Paris on August 7th, 1919. Construction of Brasilia city, which would later become the capital of Brazil. 1960. Construction of the Eiffel tower in July, 1888. A Boeing B-29 Superfortress bomber named “Enola Gay” was the bomber that dropped the “Little Boy” (nuclear bomb) over Hiroshima, Japan during World War 2. Famous album cover art for The Beatles album Abbey Road, correct? Che Guevara and Fidel Castro. Albert Einstein's matriculation certificate that he received at the age of 17, showing his final grades from the Aargau Kantonsschule (on a scale of 1-6). Filming Star Wars inside of the iconic “Millennium Falcon” spacecraft. The US-built ENIAC (Electronic Numerical Integrator and Computer) was the first computer ever made. The unbroken seal on King Tut's Tomb. The First Google Team in 1999. Dec 2 2011

U2: U2faqs.com - History FAQ - Three to Under a Blood Red Sky History FAQ A: The Early Years: Three to Under a Blood Red Sky 1. Larry Mullen, Jr., was born on October 31, 1961, in Dublin. Bono, which is a shortened version of Bono Vox, his original nickname, got the name through a group of friends who were known as the Lypton Village. Some reports say Edge was named by Bono because Dave was always on the fringe of things. In Lypton Village they thought it strange that you should go by a name given to you by your parents, when that name might not really suit you. 2. In the band's very early beginnings, circa 1978, Adam Clayton asked Steve Averill (formerly known as Steve Rapid of the band Radiators From Space) to help the band come up with a good name. "When I first met them they didn't really know what they wanted to do, what type of band they really wanted to be. Averill, it should be noted, didn't stop helping U2 when he helped choose the name. 3. This is very boring. The band were advised to dump Larry, in the early days (by a record company).

7 Nuclear Weapon Screw-Ups You Won't Believe We Survived From the 1950s up through the early 1990s, the specter of nuclear war cast a shadow over the world like a giant, gloomy mushroom tattoo. Hollywood and our own morbid imaginations came up with any number of scenarios that would wipe out humanity in a series of blinding flashes: robots, Russian and American policies of mutually assured destruction. But Kubrick was probably closest when he imagined the nuclear era as a game of poker between cocky, absent-minded lunatics. Only he probably didn't go far enough. After all, he could have never imagined ... #7. During the Cold War, American and Soviet military leaders temporarily forgot why nuclear bombing yourself was a bad idea. Anyone close enough to wonder why it was suddenly so windy and blinding were told the explosions were being set off at a safe distance. WikipediaAnd letting the fallout get blown off to the part that's not Russia. WikipediaThe Tsar Tank was to regular tanks what Ferris wheels are to regular tanks. Popular Mechanics #6.

U2 U2 have released 12 studio albums and are among the all-time best-selling music artists, having sold more than 150 million records worldwide. They have won 22 Grammy Awards, more than any other band, and in 2005, they were inducted into the Rock and Roll Hall of Fame in their first year of eligibility. Rolling Stone ranked U2 at number 22 in its list of the "100 Greatest Artists of All Time" and has labelled them the "Biggest Band in the World".[2] Throughout their career, as a band and as individuals, they have campaigned for human rights and philanthropic causes, including Amnesty International, the ONE/DATA campaigns, Product Red, and The Edge's Music Rising. History[edit] Formation and early years (1976–79)[edit] U2 in 1980. The band formed in Dublin on 25 September 1976.[3] Larry Mullen, Jr., then a 14-year-old student at Mount Temple Comprehensive School, posted a note on the school's notice board in search of musicians for a new band—six people responded. "We couldn't believe it.

Rare Historical Photos Pt. 5 Rare Historical Photos Pt. 5 [20 Pics] Nov 16 2012 Another roundup of the popular historical series of posts that we do. Arnold Schwarzenegger on the day he recieved his American citizenship. The valuable stallion Nearco is led from his personal bomb shelter on the Beech House stud farm. Times Square, New York, USA. 1972. Looks like a bad day to mow your lawn. Queen Elizabeth II firing a British L85 battle rifle. An American soldier at an advanced allied base, with his pet kangaroo. 1942. Construction of the Statue of Liberty, 1884. Tearing the Berlin Wall down, 1989. Einstein's office at the Institute for Advanced Study in Princeton, New Jersey, photographed on the day of his death, April 18, 1955. Luftwaffe pilots playing cards during the African campaign, 1942. Elisabeth "Lilo" Gloeden stands before judges, on trial for being involved in the attempt on Adolf Hitler's life, 1944. A vending machine that sold already lit cigarettes for a penny. Germans posing with a French prisoner of war.

World History International: World History Essays From Prehistory To The Present Rare Historical Photos Pt. 6 [19 Pics] Rare Historical Photos Pt. 6 [19 Pics] Dec 28 2012 Another roundup of the popular historical series of posts that we do. You can find the previous post here, and the start of the series here. People having a picnic in the middle of a highway during the 1973 oil crisis. Two lend-lease Bell P-63 “Kingcobra” aircraft flying over the Niagara falls. A drive-in plays "The Ten Commandments" in Utah, USA, 1958. People entering a makeshift bomb shelter. Construction of the Manhattan Bridge. 1908 The original “Blue Angels” flying in formation over Niagara falls. Construction of the Berlin wall. Tom Hardy (who recently played 'Bane' in “Batman: Dark Knight Rises”) and his son as Batman for Halloween. Natives admiring an American Air Force F4-U “Corsair” somewhere in the Pacific. 1943 A Christmas party for Hitlers officers and cadets. Adolf Hitler's pants after the assassination attempt at the Wolf's Lair. John F. Times Square. Ferdinand Porsche showcasing the Volkswagen Beetle to Adolf Hitler. ~1935.

Family dynasty behind BMW admits to using 50,000 slave labourers during Nazi era Guenther Quandt was a member of the Nazi party and benefited from its 'Aryanisation' programme by taking over Jewish firmsHis wife, Magda Behrend Rietschel, later divorced him and married Joseph Goebbels, with whom she died in Hitler's bunker in 1945Quandt factories employed 50,000 slave labourers to churn out weapons and ammunition for the Nazis during World War Two, making the family very richFamily still retains majority of shares in luxury car maker By Allan Hall Updated: 08:43 GMT, 28 September 2011 Family secret: Guenther Quandt, whose family now owns BMW, used slave labourers during World War Two in his weapons factories in Germany The dynasty behind the BMW luxury car marker has admitted, after decades of silence, using slave labour, taking over Jewish firms and doing business with the highest echelons of the Nazi party during World War Two. It found Guenther acquired companies through the Nazi programme of 'Aryanisation' of Jewish-owned firms. Hundreds of these labourers died.

Rare Historical Photos Pt. 7 Rare Historical Photos Pt. 7 [20 Pics] Feb 5 2013 Another roundup of the popular historical series of posts that we do. You can find the previous post here, and the start of the series here. Titanic in dry dock. The headquarters of Benito Musolini and the Italian Fascist party. Crew members of Apollo 1 rehearsing their water landing. 1966. Hindenburg flies over Manhattan in 1936. Construction of Mount Rushmore. 1934-1939. Buzz Aldrin, sitting inside Apollo 11 lunar module. A Russian Sukhoi Su-25 close air support jet that was damaged by a Georgian MANPADS (Man Portable Air Defense System). Folsom Street in San Francisco, USA after the great earthquake of 1906. Soviet cruiser “Murmansk” that ran aground off the Norwegian village Sørvær during the transfer to be scrapped in India. 1994. Hoover Dam penstocks and outlet pipes such as this one were fabricated from 45,000 tons of steel and welded into nearly three miles of pipe varying from 8.5-30ft (2.6-9m) in diameter. See more photo posts View Post

THE MADMAN AT THE BREAKFAST TABLE HITLER WAS EVEN SICKER THAN YOU THOUGHT | November 7th 2007 The Nazi leader wanted to control the world, but he couldn't even control his own digestion, and nor could his half-baked doctor, writes Tony Perrottet, adding perhaps a touch more detail than you might think appropriate ... From THE SMART SET It may sound like a Woody Allen scenario, but medical historians are unanimous that Adolf was the victim of uncontrollable flatulence. Spasmodic stomach cramps, constipation and diarrhea, possibly the result of nervous tension, had been Hitler's curse since childhood and only grew more severe as he aged. As a stressed-out dictator, the agonising digestive attacks would occur after most meals: Albert Speer recalled that the Führer, ashen-faced, would leap up from the dinner table and disappear to his room. This was an embarrassing problem for a ruthless leader of the Third Reich. For example, to combat recurrences of the volcanic stomach problems, Morell plied him with a remedy called "Dr.