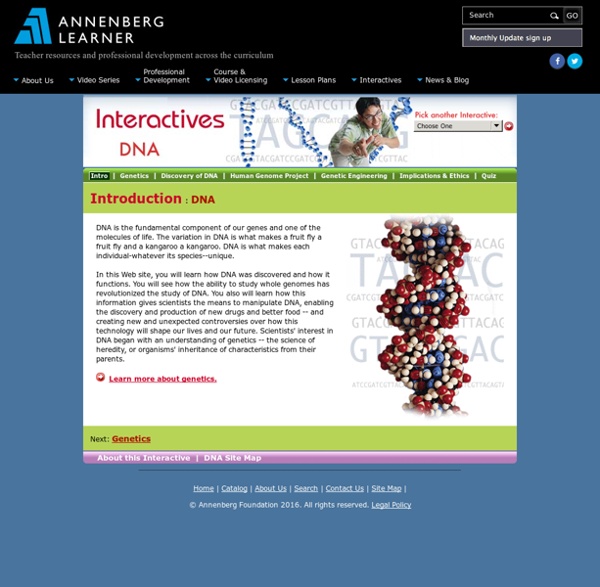 DNA is the fundamental component of our genes and one of the molecules of life. The variation in DNA is what makes a fruit fly a fruit fly and a kangaroo a kangaroo. DNA is what makes each individual-whatever its species--unique. In this Web site, you will learn how DNA was discovered and how it functions. You will see how the ability to study whole genomes has revolutionized the study of DNA. You also will learn how this information gives scientists the means to manipulate DNA, enabling the discovery and production of new drugs and better food -- and creating new and unexpected controversies over how this technology will shape our lives and our future. Learn more about genetics.

50 Awesome Chemistry Videos For The Busy Science Teacher Though we don’t often recognize it, chemistry defines nearly every element of our everyday lives. From the reactions that fuel the sun to the biology of our bodies to the technology in our gadgets, chemistry is at the heart of everything we do and is the central science that unites biology, physics, geology, astronomy, medicine, and countless other fields. Yet chemistry doesn’t always get the credit and recognition it deserves for playing such an awesome role in, well, everything. If you’ve been slighting chemistry, there’s no better time to give the field the credit it deserves than National Chemistry Week.

4 Beneficial Evolutionary Mutations That Humans Are Undergoing Right Now Most random genetic changes caused by evolution are neutral, and some are harmful, but a few turn out to be positive improvements. These beneficial mutations are the raw material that may, in time, be taken up by natural selection and spread through the population. In this post, I'll list some examples of beneficial mutations that are known to exist in human beings. Beneficial mutation #1: Apolipoprotein AI-Milano

Cellular Respiration Demo using Gummy Bears - Exciting!! This is a very simple demonstration that makes an impact. It illustrates energy release that occurs quickly. In the demonstration, Mr. Carter (the other science teacher at my school) visually reinforces the necessity of cellular metabolism’s small-step oxidation of glucose instead of releasing it all at once. The materials you will need for this demonstration are as follows: Science for Kids Water is an amazing substance! It can form into a beautiful snowflake in its solid state or evaporate into the air as a gas. Experiment with solids, liquids and gases to learn more about these states of matter. How do objects move? How far can a rubber band stretch? How does energy affect what we can see, hear or feel?

Autism Researchers Discover Genetic ‘Rosetta Stone’ Distinct sets of genetic defects in a single neuronal protein can lead either to infantile epilepsy or to autism spectrum disorders (ASDs), depending on whether the respective mutations boost the protein’s function or sabotage it, according to a new study by UC San Francisco researchers. Tracing how these particular genetic defects lead to more general changes in brain function could unlock fundamental mysteries about how events early in brain development lead to autism, the authors say. “The genetics of neuropsychiatric disease is often complicated, but here we have a single gene in which specific mutations can cause either infantile seizures or autism in a consistent and predictable manner,” said Stephan Sanders, MD, PhD, an assistant professor of psychiatry at UCSF and member of the UCSF Weill Institute for Neurosciences who is co-senior author of the new study. “This gives us an opportunity to understand both what these disorders have in common and what makes them different.”

Top 10 Amazing Biology Videos Cyborgs, stem cells, glowing mice, and hilarious music videos are great reasons to be excited about biology. Here are some of our favorite clips from the life sciences. 10. Immune Cell Chasing a BacteriumIt may look like the predecessor to Pac Man, but this vintage clip shows a neutrophil wending its way through a crowd of red blood cells to destroy its bacterial nemesis. 9. Virtual Labs The Virtual Lab is an online simulation of a chemistry lab. It is designed to help students link chemical computations with authentic laboratory chemistry. The lab allows students to select from hundreds of standard reagents (aqueous) and manipulate them in a manner resembling a real lab. More information and offline downloads. Please scroll below to find our collection of pre-written problems, they have been organized by concept and ranked by difficulty.

Scientists Are Inching Closer to Bringing Synthetic Human DNA to Life GP-Write, Meeting Again In May 2016, more than 100 experts in bioengineering and genetics convened for a private meeting at Harvard Medical School. The press were not permitted to attend, and participants were asked not to post about the event on social media.