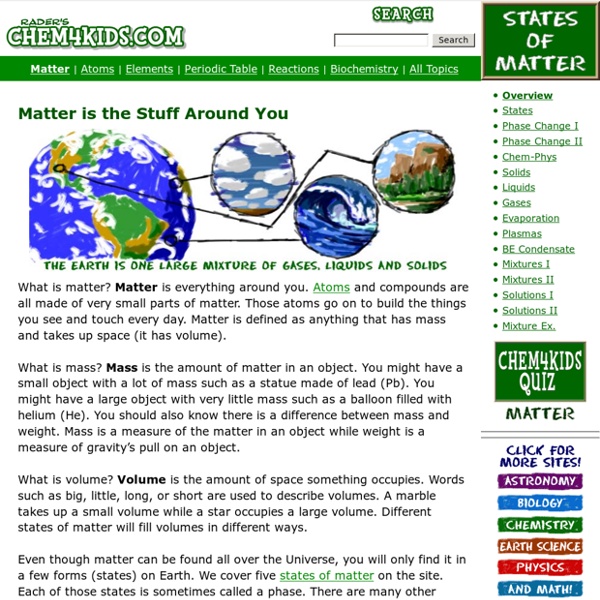 What is matter? Matter is everything around you. Atoms and compounds are all made of very small parts of matter. Those atoms go on to build the things you see and touch every day. What is mass? What is volume? Even though matter can be found all over the Universe, you will only find it in a few forms (states) on Earth. What are the main states of matter? What makes a state of matter? What is a physical change in matter? So what is a chemical change in matter? Physical changes are related to changes in the immediate environment such as temperature, pressure, and other physical forces. Alien Matter in the Solar System (NASA Video) Related:  Matter • mcphillen_v

What is Matter | Matter Facts for Kids Some substances, like glass and water, allow light to pass through them. These substances are called transparent or see-through. The matter is still there, even though it can be hard to see. Humans are very good at changing matter to make things we can use. Gases Gases Gases such as air are the lightest state of matter. Gases › Solids Solids Solids, such as wood and stone, have a fixed shape that is difficult to change. Solids › Liquids Liquids Liquids such as water can flow freely, changing their shape. Liquids › Some matter is bound up in living creatures, such as animals and plants. Earth is mostly made up of nonliving substances such as rock and metal. Changing states Changing states Matter can come in different forms, or states, such as solids, liquids, and gases. Changing states › Atoms › All matter is made up of tiny, tiny particles called atoms. Atoms › Inside an atom › Atoms can be broken down into even smaller particles. Inside an atom › Molecules › Molecules ›

Physics for Kids: Wave Behavior Science >> Physics for Kids When waves encounter new mediums, barriers, or other waves they can behave in different ways. In physics these behaviors are described using some of the terms below. Reflection The word "reflection" is used in everyday life to describe what we see in a mirror or on the surface of the water. In physics, a reflection is when a wave encounters a new medium that acts as a barrier, causing the wave to return to the original medium. The wave "reflects" off the barrier at an angle that is incident to the angle of the wave hitting the barrier (see below). Refraction Refraction of a wave occurs when a wave changes direction upon moving from one medium to another. One example of refraction is a prism. Diffraction Diffraction occurs when a wave stays in the same medium, but bends around an obstacle. An example of a diffracted wave passing through a small opening. Polarization Polarization is when a wave oscillates in one particular direction. Absorption Interference Activities

What is matter? Introduction to matter Matter is anything, such as a solid, liquid or gas, that has weight (mass) and occupies space. For anything to occupy space, it must have volume. Thinking about it, everything on earth has weight and takes up space, and that means everything on earth is matter. Take a look at this boy blowing bubbles. He is holding a cup with some bubble solution in it. The boy's cup, liquid and the air he is blowing is matter. It is because of their individual properties that they are made up of. But what are their individual properties made up of? Good question. In this lesson, we shall look at the behavior and states of matter — Solids, Liquids and Gases, which are known as the three states of matter.

Physics for Fun | CU Science Discovery Interested in teaching physics in your classroom? The Physics for Fun resources will introduce key topics in physics through the use of videos and activities developed for students in grades 4-8. Video Introduction to Physics for Fun Convection Connection Electricity Force and Motion Light Sound

States of Matter - Atomic Bonding, Chemistry, Heat Topics Atomic Bonding Interaction Potential States of Matter Dipole Description Watch different types of molecules form a solid, liquid, or gas. Sample Learning Goals Describe a molecular model for solids, liquids, and gases.Extend this model to phase changes.Describe how heating or cooling changes the behavior of the molecules.Describe how changing the volume can affect temperature, pressure, and state.Relate a pressure-temperature diagram to the behavior of molecules.Interpret graphs of interatomic potential.Describe how forces on atoms relate to the interaction potential.Describe the physical meaning of the parameters in the Lennard-Jones potential, and how this relates to the molecule behavior. Version 1.2.1 HTML5 sims can run on iPads and Chromebooks, as well as PC, Mac, and Linux systems. iPad: iOS 12+ SafariiPad compatible sims Android: Not officially supported. Windows Systems: Microsoft Edge, latest version of Firefox, latest version of Google Chrome.

Is Air Made of Matter? How to Prove It Is air made of matter? You can't see or smell the air, so you may be wondering whether or not it is made of matter. Here is the answer, plus how you can tell prove air (or any other phenomenon) consists of matter. How Can You Tell Air Is Matter? Yes, air is matter. One way is to blow up a balloon with air. The matter in air is what supports the enormous weight of a plane. Also, consider the ways you experience air. If you have access to the equipment, you can weigh air on a scale. Weigh the container again. What Type of Matter Is Air? Air is an example of a gas. A gas is a form of matter that can change its shape and volume. If you analyze air, it consists mostly of nitrogen and oxygen, with smaller amounts of several other gases, including argon, carbon dioxide, and neon. The Amount of Matter Isn't Constant The amount of matter in a sample of air isn't constant from one place to another. Seeing and Tasting Air While you can't see or taste air, this is because it's a gas.

CEMC - Web Resources - Emmy Noether Circles - Mathematics Contests - University of Waterloo Named in honour of the mathematician Emmy Noether, this free online project aims to encourage the participation of both teachers and students at the Grade 5 and 6 level in solving problems for enjoyment and satisfaction. The 'circle' symbolizes an inclusive and collaborative setting, open to a variety of ability levels, wherein mutual support enhances individual investigations. Each Circle is a set of six problems, plus hints, suggestions, and solutions. The problems can be used individually, or as a set, as time permits. While group work is a major focus, most problems are also accessible to students who prefer to work on their own. Information for Teachers Certificate of Merit Certificate of Participation Circles are available in the charts below both as complete sets and divided into problems identified by curriculum strand.

What is Matter? Matter is All Around Us We seldom stop to think about it as we go about our daily lives, but we are matter. Everything we detect in the universe is matter. It's the fundamental building block of everything: you, me and all the life on Earth, the planet we live on, the stars, and galaxies. It's typically defined as anything that has mass and occupies a volume of space. We're made up of atoms and molecules, which are also matter. The definition of matter is anything that has mass and takes up space. However, that definition is reall only extended to normal matter. Normal Matter Normal matter is the matter that we see all around us. Normal matter is luminous, not because it "shines", but because it interacts electromagnetically and gravitationally with other matter and with radiation. Another aspect of normal matter is antimatter. When matter and antimatter collide the annihilate and create pure energy in the form of gamma rays. Dark Matter The exact nature of dark matter is not well known.

CEMC - Web Resources - Problem of the Week - University of Waterloo The Problem of the Week is designed to provide students with an ongoing opportunity to solve mathematical problems. Each week, problems from various areas of mathematics will be posted here and e-mailed to teachers for use with their students from grades 3 and up. Current Problems Subscribe Now! Information for Teachers These problems may be used in a variety of different ways including: posting the problems in a classroom, discussing the problems with students, and integrating the problems into the curriculum. We know that teachers will use these problems in many creative ways! Solutions to the problems will be sent out to teachers one week after the problems are e-mailed. Current Problem Archive 2018-2019 Solution Archive 2018-2019 Problem and Solution Archive Each of the following links is to a booklet containing all the problems from particular years with solutions.