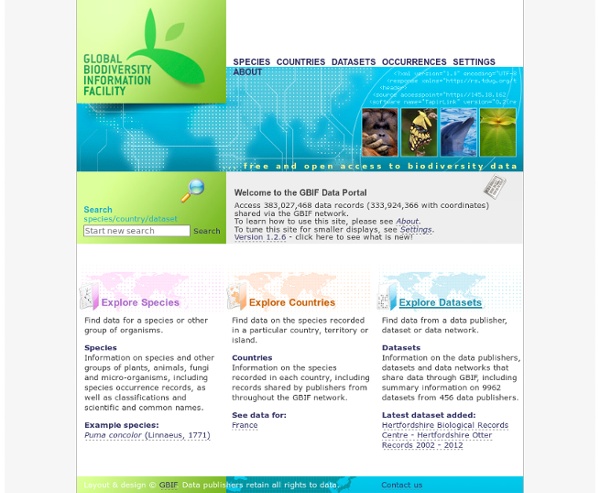 Try out the new GBIF portal! Why not try out the new GBIF portal at www.gbif.org, which has many more features and includes lots of information about the GBIF community, including great examples of data uses in research and interesting applications? The old GBIF data portal which you are viewing now will continue to be supported until we are satisfied it can be taken down without causing major inconvenience. Be aware that the content here is static and has not been updated since the launch of the new portal on 9 October 2013. If and when a date is confirmed for discontinuing the old data portal, we will post it here with plenty of prior notice. Welcome to the (former) GBIF Data Portal Access 416,242,316 data records (363,215,360 with coordinates) shared via the GBIF network. Explore Species Find data for a species or other group of organisms. Species Example species: Puma concolor (Linnaeus, 1771) Explore Countries Find data on the species recorded in a particular country, territory or island.

HOME Search FishBase Associated Journal Publish in our journal partner Acta Ichthyologica et Piscatoria the results of your primary research on fishes about growth, weight-length relationships, reproduction (maturity, fecundity, spawning), food and diet composition, introductions and range extensions for faster subsequent entry in (2011 impact factor: 0.547). Indexed Journal Cybium (publisher: SFI, Société Française d’Ichtyologie) For journal editors: Would you wish that your journal were indexed in FishBase, please contact our librarian. References Citing FishBase How to cite FishBaseTo give due credit to the original authors, please cite data taken from FishBase by Main Ref. and/or Data Ref. of the respective record. Cite FishBase itself asFroese, R. and D. DisclaimerFishBase present information on fishes as correctly as possible. Copyright This work is licensed under a Creative Commons Attribution-Noncommercial 3.0 Unported License.

The Environmentalist National Center for Biotechnology Information Catalogue of Life - 3rd February 2012 :: Search all names The Biodiversity Hotspots Page Content Life on Earth faces a crisis of historical and planetary proportions. Unsustainable consumption in many northern countries and crushing poverty in the tropics are destroying wild nature. Biodiversity is besieged. Extinction is the gravest aspect of the biodiversity crisis: it is irreversible. In a world where conservation budgets are insufficient given the number of species threatened with extinction, identifying conservation priorities is crucial. The biodiversity hotspots hold especially high numbers of endemic species, yet their combined area of remaining habitat covers only 2.3 percent of the Earth's land surface. Hotspots in Context Hotspots Defined Impact of Hotspots Hotspots Revisited Conservation Responses Subsection 01 Eight Hotspots hold a diversity of plant and animal life, many of which are found no where else on Earth. Subsection 02 Composed of large land areas as well as islands dotting the Pacific seas, these 13 Hotspots represent important biodiversity.

Welcome to ZipcodeZoo Video: At 800 Pounds and 45 Feet Long, The Largest-Ever Paper Airplane Takes Flight Arturo Valdenegro, 12-year-old Tucson resident, made paper aviators everywhere look minuscule by comparison last week. In the skies over the Sonora desert in Arizona, the Pima Air & Space Museum launched the biggest paper airplane ever constructed--a paper airplane based on Valdenegro's design--into the sky, accelerating it to speeds topping 100 miles per hour before it came crashing down (as paper airplanes do). The plane, aptly named Arturo's Desert Eagle, weighed 800 pounds and stretched 45 feet long with a 24-foot wingspan. The museum constructed it out of falcon board, a kind of corrugated cardboard, as part of its Giant Paper Airplane Project, the goal of which is to generate interest in aviation and engineering among young people. Arturo designed and folded his plane for the competition, winning top honors in a fly-off sponsored by the Pima museum. But for last week's flight, his design was adopted and constructed by Art Thompson, one of the designers of the B-2 stealth bomber.

ECNC : expertise Centre for biodiversity and sustainable development Wikispecies, free species directory UNEP-WCMC Earth Earth is the third planet from the Sun. It is the densest and fifth-largest of the eight planets in the Solar System. It is also the largest of the Solar System's four terrestrial planets. Earth formed approximately 4.54 billion years ago, and life appeared on its surface within its first billion years.[24] Earth's biosphere then significantly altered the atmospheric and other basic physical conditions, which enabled the proliferation of organisms as well as the formation of the ozone layer, which together with Earth's magnetic field blocked harmful solar radiation, and permitted formerly ocean-confined life to move safely to land.[25] The physical properties of the Earth, as well as its geological history and orbit, have allowed life to persist. Name and etymology The modern English noun earth developed from Middle English erthe (recorded in 1137), itself from Old English eorthe (dating from before 725), deriving from Proto-Germanic *erthō. Composition and structure Shape Heat Surface

IGF Biology History The objects of our research will be the different forms and manifestations of life, the conditions and laws under which these phenomena occur, and the causes through which they have been effected. The science that concerns itself with these objects we will indicate by the name biology [Biologie] or the doctrine of life [Lebenslehre]. Although modern biology is a relatively recent development, sciences related to and included within it have been studied since ancient times. Natural philosophy was studied as early as the ancient civilizations of Mesopotamia, Egypt, the Indian subcontinent, and China. However, the origins of modern biology and its approach to the study of nature are most often traced back to ancient Greece.[6] While the formal study of medicine dates back to Hippocrates (ca. 460 BC – ca. 370 BC), it was Aristotle (384 BC – 322 BC) who contributed most extensively to the development of biology. Foundations of modern biology Cell theory Main article: Cell theory Genetics