The Beginner's Guide to Social Media 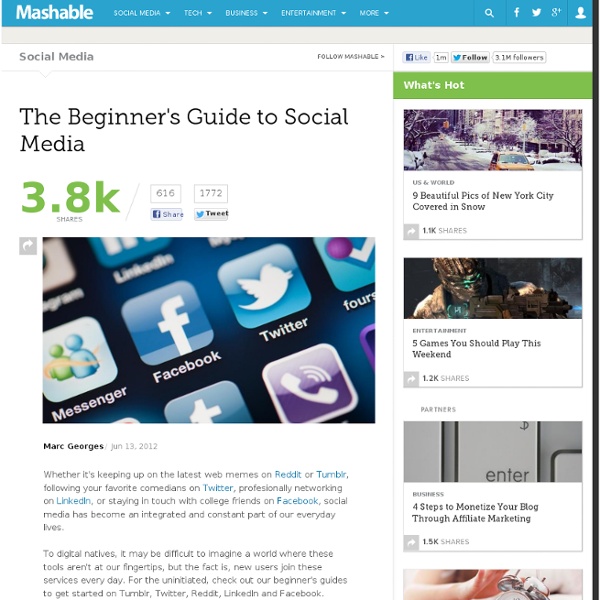 Whether it's keeping up on the latest web memes on Reddit or Tumblr, following your favorite comedians on Twitter, profesionally networking on LinkedIn, or staying in touch with college friends on Facebook, social media has become an integrated and constant part of our everyday lives. To digital natives, it may be difficult to imagine a world where these tools aren't at our fingertips, but the fact is, new users join these services every day. For the uninitiated, check out our beginner's guides to get started on Tumblr, Twitter, Reddit, LinkedIn and Facebook. 1. The Beginner's Guide to Tumblr This micro-blogging platform brings together bloggers, brands and tastemakers. If you're already comfortable tumbling, check out these our tips and tricks for power users: 2. It may not be the sexiest social network out there, but LinkedIn now has 161 million members in more than 200 countries, making it the world’s largest professional network on the web. Already have a profile? 3.

5 Ways Social Media Can Inspire Young Artists When we were in school, budding artists lugged around black sketchbooks and convened at informal coffeehouses to share their talents. Today’s kids gather inspiration online via Pinterest and showcase their singing and storytelling skills on YouTube and Snapchat. Here are five ways your students can draw on social media to fuel their creativity. 1. Use social media to talk about audience. Between sites like Facebook, Twitter and Pinterest, it’s never been easier to put one’s artwork out there for the world to see. As students work on a project, you might talk about audience in social media terms. 2. Try challenging your students to choose a post, video or pin as inspiration for their own works of art, whether it’s a drawing, piece of writing, graphic or short film. 3. As a class, try browsing the blogs, Facebook pages or Twitter feeds of various writers, artists and performers. 4. 5. Question for you: Have you used social media to inspire creativity in your students?

Using Social Media To Engage An Audience – A Case Study Engaging a customer base is of course a very important part of social media. It is vital, truly, to the overall success and long-term growth of a given company/brand’s following and fan base in the social media space. I say “of course” because there is the presumption that everyone reading this already knows this… at least they better. One such company/brand that truly understands and is reaping the rewards of engaging an audience via social media is Atlantic Station – an Atlanta-based mixed-use experience center mall that is one of the biggest outdoor mixed use malls in the entire country. At the end of last year their Facebook fan page likes were a little more than 13,000, which is respectable for sure but not where they wanted, nor needed to be. Now, they knew their target market is people in the 18-49 demographic, especially women, but they felt they were not reaching nearly enough of them via their social media efforts. Topics such as: (along with a sample post for each) Local content

Why traditional media should be afraid of Twitter As we’ve mentioned a number of times, Twitter has been gradually tip-toeing further and further into the media business for some time now. It has already become a real-time newswire for many, a source of breaking news and commentary on live events, and now — with the launch of curated “hashtag pages” like the one it launched late last week for a NASCAR event — it is showing signs of becoming a full-fledged editorial operation. It may not be hiring investigative reporters, but the areas of overlap between what it does and what media companies do is growing, and so is its attractiveness to the advertisers that media entities desperately need to hang onto. The NASCAR page may not seem like anything to be concerned about, since it appears to be just a typical grouping of tweets collected by hashtag. Twitter is curating information, just as media companies do Twitter revolutionized journalism once before, and news organizations responded with the social media editor.

10 Surprising Social Media Statistics That Might Make You Rethink Your Social Strategy | Belle Beth Cooper#! Social Media is changing faster than ever, as if that wasn't something everyone already knew! If you're managing social media for your business, it might be useful to know about some of the most surprising social media statistics this year. Here are ten that might make you rethink the way you're approaching social media. 1. This demographic has grown 79% since 2012. Rethink it: Keep older users in mind when using social media, particularly on these three platforms. 2. 189 million of Facebook's users are 'mobile only' Not only does Facebook have millions of users who don't access it from a desktop or laptop, but mobile use generates 30% of Facebook's ad revenue as well. Rethink it: There are probably more users accessing Facebook from mobile devices than you thought. 3. Did you think TV was the best way to reach the masses? Rethink it: If you've been putting off adding video to your strategy, now's the time to give it a go. Source: jeffbullas.com 4. 5. 6. Source: jeffbullas.com 9.

Tony Nicklinson, Paralyzed Man With Locked-In Syndrome, Sends First Tweet Using His Eyes Tony Nicklinson can only communicate with his eyes, but on Wednesday the paralyzed man connected with the rest of the world through Twitter. Nicklinson became completely paralyzed after a stroke in 2005 and suffers from locked-in syndrome, a condition in which patients can "think and reason" but don't have any control over voluntary muscles except "those that control blinking and vertical eye movements," according to a 2009 article published in the journal Nursing. But on June 13, he sent his first Tweet with the help of a computer that follows his eye movements, Gizmodo observes. Hello world. Channel 4 Dispatches filmed the 57-year-old from Wiltshire in England relaying the message as part of a segment about Nicklinson set to air on June 18, the Guardian reports. But there's more to Nicklinson's story than his journey to become part of a social network. And in March, the husband and father of two received approval from a judge to have his case heard, the Associated Press reports.

Social Media for Administrators As I have done a lot of work with school administrators on why they should be using social media and some practical ways to use it within their schools, I wanted to compile some articles together that will help schools/organizations move forward. They will be listed under two categories; the why and the how. The articles are listed below: The Why The Need for Courageous Leadership – If new ideas are going to happen and we are going to encourage risks, we need to take risks as well. What Digital Accelerates – Many of the fundamentals that were important 50 years ago are still important today. Humanizing Our Organizations Through Social Media – In this post, I share what many organizations are doing around the world and how it is important that in education, we get through our culture of fear and do what we can to connect with those that we serve. There can no longer be an “opt out” clause when dealing with technology in our schools, especially from our administrators. The How

Inside GM’s Chevy’s Social Media Strategy Given all the material out there about GM pulling out of Facebook advertising, Digiday thought it would be interesting to get the carmaker’s take on what it is doing in social media. Digiday interviewed Carolyn Probst-Iyer, social media manager at GM’s Chevrolet, about a current Chevy promotion and the company’s overall social media strategy. Here is what she said. Can you talk about Chevy’s approach to social media? We offer compelling content related to the Chevrolet brand, our products and services as well as lifestyle content stemming from a vast variety of deeper integrations and programs that Chevrolet activates with the support of a large network of partners. Aside from engaging our communities with rich content, we aim to have an ongoing (two-way) conversation with our customers, fans and followers. What would you say the biggest challenge is with social media? With social media being “always-on,” the community dictates the pace you are going at.

How Your Facebook "Likes" Could Bring Down NDAA, CISPA, And Other Bad Ideas Guest post by David Seaman This may sound obvious to my readers, but to me it wasn't an "obvious" realization at the time: social media is extraordinarily powerful. As you can see above, my personal YouTube channel (which has been mostly dedicated to raising awareness of NDAA and dangerous "cybersecurity" bills like CISPA), has attracted more than 415,000 video views - as much as, if not more than, some of the popular evening cable news shows. Is this due to the importance of the subject matter? Is it due to my brilliant ability to title videos well? The popularity of that channel comes down to people, lots of people who care about the issues I discuss, "Liking" the videos when they watch them. Your Facebook Likes, Google+ "+1s," and the links you tweet out to your friends on Twitter carry even more influence. The results were immediate and shocking: an avalanche of new traffic, and new users trying out our credit card deals sorting tool, and best of all... it was good traffic.

20 TV Shows With the Most Social Media Buzz This Week Buzz surrounding the ESPN broadcasts of the 2012 UEFA European Football Championship almost entirely dominated cable TV chatter this week. But while soccer fans may be rowdy, basketball fanatics are this week's clear social media champs. When the Thunder met the Heat for Game 3 of the NBA Playoffs, there was a perfect storm of trash talk and gloating (the latter from Heat fans) that totaled more social media impressions than the top five EURO 2012 games combined. Miami beat Oklahoma City 91-85, bringing the series standings to Heat: 2, Thunder: 1. Despite the Los Angeles Kings' first 2012 Stanley Cup championship title, buzz over last Monday night's hockey finals didn't really compete.

NBA Social Media Awards a Pro Sports First [EXCLUSIVE] A longtime pacemaker in social media use by professional sports leagues, the National Basketball Association is putting on its first ever NBA Social Media Awards later this month. The televised awards ceremony will recognize players, teams and fans who excelled at leveraging social media for engagement and entertainment this season. Awards will celebrate social media success on platforms including Twitter, Facebook, Instagram and YouTube, according to league representatives. The June 20 ceremony will be televised on NBATV. Fans can visit the official social media awards website to see the full list of categories and vote for their winners. The Ultimate Fighting Championship has handed out quarterly bonuses and recognized social media engagement among its fighters, but the NBA's June 20 event will be the first time a major American sports league has dedicated a full awards ceremony to social media.