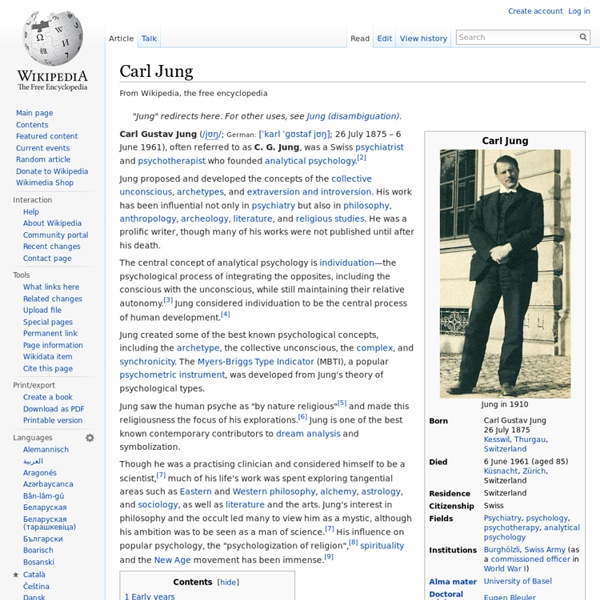 Carl Gustav Jung (/jʊŋ/; German: [ˈkarl ˈɡʊstaf jʊŋ]; 26 July 1875 – 6 June 1961), often referred to as C. G. Jung, was a Swiss psychiatrist and psychotherapist who founded analytical psychology.[2] Jung proposed and developed the concepts of the collective unconscious, archetypes, and extraversion and introversion. His work has been influential not only in psychiatry but also in philosophy, anthropology, archeology, literature, and religious studies. He was a prolific writer, though many of his works were not published until after his death. The central concept of analytical psychology is individuation—the psychological process of integrating the opposites, including the conscious with the unconscious, while still maintaining their relative autonomy.[3] Jung considered individuation to be the central process of human development.[4] Early years[edit] Childhood family[edit] Jung's mother left Laufen for several months of hospitalization near Basel for an unknown physical ailment.

Ecological economics Ecological economics/eco-economics refers to both a transdisciplinary and interdisciplinary field of academic research that aims to address the interdependence and coevolution of human economies and natural ecosystems over time and space.[1] It is distinguished from environmental economics, which is the mainstream economic analysis of the environment, by its treatment of the economy as a subsystem of the ecosystem and its emphasis upon preserving natural capital.[2] One survey of German economists found that ecological and environmental economics are different schools of economic thought, with ecological economists emphasizing strong sustainability and rejecting the proposition that natural capital can be substituted by human-made capital.[3] Ecological economics was founded as a modern movement in the works of and interactions between various European and American academics (see the section on history and development below). History and development[edit] Nature and ecology[edit]

Michael Tipper's Blog — Creating The Time And Space To Live Life To The Full I was checking my Facebook Notifications this morning and I was drawn to this post made by Nigel Risner on The Global Speakers and Authors Mastermind Group. I wasn’t sure if the group was open to the public so I copied this because I wanted to share it with you: 12 Signs of a Spiritual Awakening (from an unknown 12-step source) An increased tendency to let things happen rather than make them happen.Frequent attacks of smiling.Feelings of being connected with others and nature.Frequent overwhelming episodes of appreciation.A tendency to think and act spontaneously rather than from fears based on past experience.An unmistakable ability to enjoy each moment.A loss of ability to worry.A loss of interest in conflict.A loss of interest in interpreting the actions of others.A loss of interest in judging others.A loss of interest in judging self.Gaining the ability to love without expecting anything in return …Nice one Nigel . What do you do with your time?

25+ apps that the TED staff swears make their everyday lives easier At our small, fast-moving nonprofit company, everyone does a couple of jobs — and productivity apps help us manage roles that shift between coding, writing/designing and running a full-scale conference twice a year. We asked the TED staff what apps they can’t live without. And beyond the classics—Instagram, Google Maps, Spotify, Uber, Seamless—we found some great apps that might help you too. (A star denotes that the app is free, or at least has a free version.) For random life stuff…

Epicurus Epicurus (/ˌɛpɪˈkjʊərəs/ or /ˌɛpɪˈkjɔːrəs/;[2] Greek: Ἐπίκουρος, Epíkouros, "ally, comrade"; 341–270 BC) was an ancient Greek philosopher as well as the founder of the school of philosophy called Epicureanism. Only a few fragments and letters of Epicurus's 300 written works remain. Much of what is known about Epicurean philosophy derives from later followers and commentators. For Epicurus, the purpose of philosophy was to attain the happy, tranquil life, characterized by ataraxia—peace and freedom from fear—and aponia—the absence of pain—and by living a self-sufficient life surrounded by friends. He taught that pleasure and pain are the measures of what is good and evil; death is the end of both body and soul and should therefore not be feared; the gods neither reward nor punish humans; the universe is infinite and eternal; and events in the world are ultimately based on the motions and interactions of atoms moving in empty space.

Dream interpretation Dream Interpretation is the process of assigning meaning to dreams. In many ancient societies, such as those of Egypt and Greece, dreaming was considered a supernatural communication or a means of divine intervention, whose message could be unravelled by people with certain powers. In modern times, various schools of psychology and neurobiology have offered theories about the meaning and purpose of dreams. General Systems Theory © 1993, David S. Walonick, Ph.D. General systems theory was originally proposed by biologist Ludwig von Bertalanffy in 1928. Since Descartes, the "scientific method" had progressed under two related assumptions. A system could be broken down into its individual components so that each component could be analyzed as an independent entity, and the components could be added in a linear fashion to describe the totality of the system.

Speed-Read From Wired How-To Wiki Illustration: Jason Lee/Wired The ability to digest 1,200 words per minute is like a nerdy superpower. (Average mortals max out at 300.) We tapped Michael Tipper, speed-reading coach to the likes of Shell and IBM, for tips. On your marks, get set ... read! 200++ Photoshop Photo Effects EmailEmail Have you ever wonder where is that photo effect tutorial you saw the other day and start searching all over the internet but couldn’t find what you saw initially? Honestly, i have. That is why i throw them all into this article instead. Socrates Socrates (/ˈsɒkrətiːz/;[2] Greek: Σωκράτης [sɔːkrátɛːs], Sōkrátēs; 470/469 – 399 BC)[1] was a classical Greek (Athenian) philosopher credited as one of the founders of Western philosophy. He is an enigmatic figure known chiefly through the accounts of classical writers, especially the writings of his students Plato and Xenophon and the plays of his contemporary Aristophanes. Plato's dialogues are among the most comprehensive accounts of Socrates to survive from antiquity, though it is unclear the degree to which Socrates himself is "hidden behind his 'best disciple', Plato".[3]

Fantasy (psychology) Fantasy in a psychological sense is broadly used to cover two different senses, conscious and unconscious. In the unconscious sense, it is sometimes spelled "phantasy". A fantasy is a situation imagined by an individual that expresses certain desires or aims on the part of its creator. Fantasies sometimes involve situations that are highly unlikely; or they may be quite realistic. Fantasies can also be sexual in nature. Another, more basic meaning of fantasy is something which is not 'real,' as in perceived explicitly by any of the senses, but exists as an imagined situation of object to subject.