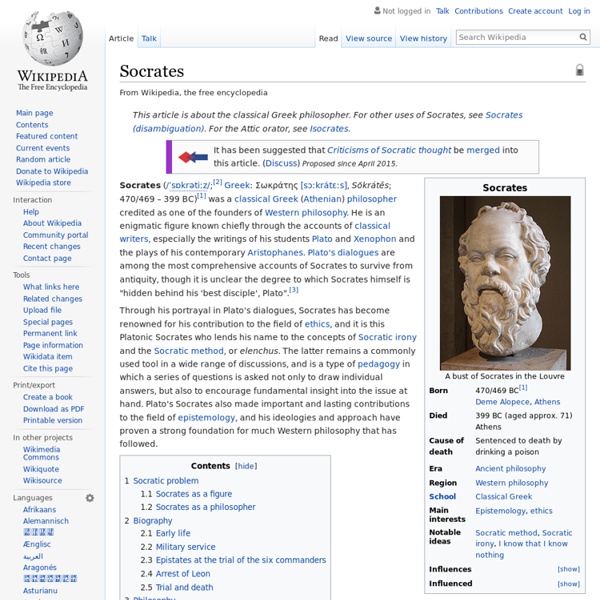 Socrates (/ˈsɒkrətiːz/;[2] Greek: Σωκράτης [sɔːkrátɛːs], Sōkrátēs; 470/469 – 399 BC)[1] was a classical Greek (Athenian) philosopher credited as one of the founders of Western philosophy. He is an enigmatic figure known chiefly through the accounts of classical writers, especially the writings of his students Plato and Xenophon and the plays of his contemporary Aristophanes. Plato's dialogues are among the most comprehensive accounts of Socrates to survive from antiquity, though it is unclear the degree to which Socrates himself is "hidden behind his 'best disciple', Plato".[3] Through his portrayal in Plato's dialogues, Socrates has become renowned for his contribution to the field of ethics, and it is this Platonic Socrates who lends his name to the concepts of Socratic irony and the Socratic method, or elenchus. Socratic problem Nothing written by Socrates remains extant. Socrates as a figure Socrates as a philosopher Biography Early life Military service Arrest of Leon Trial and death Notes

Hallucination Hallucinations can occur in any sensory modality — visual, auditory, olfactory, gustatory, tactile, proprioceptive, equilibrioceptive, nociceptive, thermoceptive and chronoceptive. A mild form of hallucination is known as a disturbance, and can occur in most of the senses above. These may be things like seeing movement in peripheral vision, or hearing faint noises and/or voices. Auditory hallucinations are very common in paranoid schizophrenia. They may be benevolent (telling the patient good things about themselves) or malicious, cursing the patient etc.

Angels – Hindu - Akashic Records - Chitragupta - Yama - Dharam Raja - Death - Reincarnation By Whitney Hopler Hindus believe that a deity named Chitragupta is in charge of recording all the deeds -- both good and bad -- that people perform during their lifetimes. Chitragupta is an angelic being called a deva, and he works for the Hindu god of death, Yama (who is also sometimes known as Dharam Raja) writing down people's actions in the Akashic records (a mystical code of everything that has ever happened in the universe). Chitragupta's name is similar to the names of the two angels in Sikhism who record people's deeds during their lifetimes: Chitar and Gupat (whose alternate names are Chitra and Gupta, which together form Chitragupta's name). Recording Every Action Chitragupta notices and records absolutely everything a person chooses to do during his or her lifetime, believers say.

Epicurus Epicurus (/ˌɛpɪˈkjʊərəs/ or /ˌɛpɪˈkjɔːrəs/;[2] Greek: Ἐπίκουρος, Epíkouros, "ally, comrade"; 341–270 BC) was an ancient Greek philosopher as well as the founder of the school of philosophy called Epicureanism. Only a few fragments and letters of Epicurus's 300 written works remain. Much of what is known about Epicurean philosophy derives from later followers and commentators. For Epicurus, the purpose of philosophy was to attain the happy, tranquil life, characterized by ataraxia—peace and freedom from fear—and aponia—the absence of pain—and by living a self-sufficient life surrounded by friends. Myers Motors NmG Corbin Sparrow 'Pizza Butt'. The Myers Motors NmG (formerly the Corbin Sparrow) is a single-passenger, three-wheeled, battery electric vehicle designed specifically for commuting and city driving. It was initially produced by Corbin Motors and now by Myers Motors. It is a Personal Electric Vehicle (PEV).[2] Description[edit] The Sparrow is powered by a 20 kW (continuous) 156-volt DC or 3-phase AC electric motor and has a range of 32 to 64 km (20 to 40 miles) and a top speed of 112 km/h (70 mph).

Hippocrates Hippocrates of Cos or Hippokrates of Kos (/hɪˈpɒkrəˌtiːz/; Greek: Ἱπποκράτης; Hippokrátēs; c. 460 – c. 370 BC), was an ancient Greek physician of the Age of Pericles (Classical Greece), and is considered one of the most outstanding figures in the history of medicine. He is referred to as the father of western medicine[2][3][4] in recognition of his lasting contributions to the field as the founder of the Hippocratic School of Medicine. This intellectual school revolutionized medicine in ancient Greece, establishing it as a discipline distinct from other fields that it had traditionally been associated with (notably theurgy and philosophy), thus establishing medicine as a profession.[5][6]

Nikola Tesla Nikola Tesla (Serbian Cyrillic: Никола Тесла; 10 July 1856 – 7 January 1943) was a Serbian American[2][3][4][5] inventor, electrical engineer, mechanical engineer, and futurist best known for his contributions to the design of the modern alternating current (AC) electricity supply system.[6] Tesla gained experience in telephony and electrical engineering before immigrating to the United States in 1884 to work for Thomas Edison in New York City. He soon struck out on his own with financial backers, setting up laboratories and companies to develop a range of electrical devices. His patented AC induction motor and transformer were licensed by George Westinghouse, who also hired Tesla for a short time as a consultant. His work in the formative years of electric power development was also involved in the corporate struggle between making alternating current or direct current the power transmission standard, referred to as the War of Currents. Early years (1856–1885)

Carl Jung Carl Gustav Jung (/jʊŋ/; German: [ˈkarl ˈɡʊstaf jʊŋ]; 26 July 1875 – 6 June 1961), often referred to as C. G. Jung, was a Swiss psychiatrist and psychotherapist who founded analytical psychology.[2] Jung proposed and developed the concepts of the collective unconscious, archetypes, and extraversion and introversion. Chip's Challenge Chip's Challenge is a top-down tile-based puzzle video game created in 1989 by Chuck Sommerville originally for the hand-held Atari Lynx. Chip's Challenge was then later ported to multiple formats including the Amiga, Commodore 64, ZX Spectrum,[1] DOS, and Windows, included in the Microsoft Entertainment Pack and Best of Microsoft Entertainment Pack (the last of which was written by Tony Krueger in 1991). Microsoft licensed Chip's Challenge from Epyx to write a DOS and Windows version of the game; while porting the game, the logic was slightly changed from the original version.

Asclepiades of Bithynia Life[edit] Asclepiades was born in Prusias in Bithynia. He travelled much when young, and seems at first to have settled at Rome as a rhetorician.[1] In that profession he did not succeed, but he acquired great reputation as a physician. His pupils were very numerous, and his most distinguished pupil, Themison of Laodicea, founded the Methodic school. It is not known when he died, except that it was at an advanced age. Albert Einstein Albert Einstein (/ˈaɪnstaɪn/;[2] German: [ˈalbɛɐ̯t ˈaɪnʃtaɪn]; 14 March 1879 – 18 April 1955) was a German-born theoretical physicist. He developed the general theory of relativity, one of the two pillars of modern physics (alongside quantum mechanics).[1][3]:274 Einstein's work is also known for its influence on the philosophy of science.[4][5] Einstein is best known in popular culture for his mass–energy equivalence formula E = mc2 (which has been dubbed "the world's most famous equation").[6] He received the 1921 Nobel Prize in Physics for his "services to theoretical physics", in particular his discovery of the law of the photoelectric effect, a pivotal step in the evolution of quantum theory.[7] Near the beginning of his career, Einstein thought that Newtonian mechanics was no longer enough to reconcile the laws of classical mechanics with the laws of the electromagnetic field. This led to the development of his special theory of relativity. Biography

Mary Wollstonecraft Mary Wollstonecraft (/ˈwʊlstən.krɑːft/; 27 April 1759 – 10 September 1797) was an eighteenth-century English writer, philosopher, and advocate of women's rights. During her brief career, she wrote novels, treatises, a travel narrative, a history of the French Revolution, a conduct book, and a children's book. Wollstonecraft is best known for A Vindication of the Rights of Woman (1792), in which she argues that women are not naturally inferior to men, but appear to be only because they lack education. She suggests that both men and women should be treated as rational beings and imagines a social order founded on reason. The Incredible Machine (series) Screenshot from The Incredible Machine Version 3.0 The Incredible Machine (aka TIM) is a series of computer games that were originally designed and coded by Kevin Ryan and produced by Jeff Tunnell, the now-defunct Jeff Tunnell Productions, and published by Dynamix; the 1993 through 1995 versions had the same development team, but the later 2000–2001 titles had different designers. All versions were published by Sierra Entertainment.

Aretaeus of Cappadocia Aretaeus (Greek: Ἀρεταῖος), is one of the most celebrated of the ancient Greek physicians, of whose life, however, few particulars are known. There is some uncertainty regarding both his age and country, but it seems probable that he practised in the 1st century CE, during the reign of Nero or Vespasian. He is generally styled "the Cappadocian" (Καππάδοξ). Diagnostic method[edit] Aretaeus wrote in Ionic Greek a general treatise on diseases, which is still extant. Akashic records Background[edit] Akasha is a Sanskrit word meaning "sky", "space" or "aether", and it entered the language of theosophy through H. P.