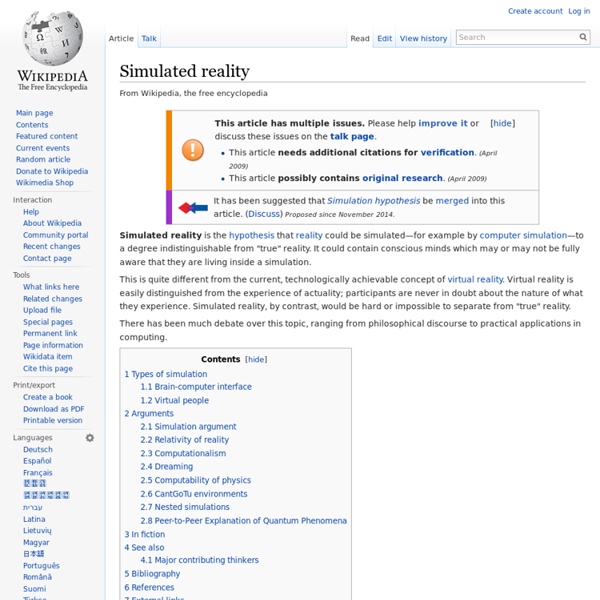 Simulated reality is the hypothesis that reality could be simulated—for example by computer simulation—to a degree indistinguishable from "true" reality. It could contain conscious minds which may or may not be fully aware that they are living inside a simulation. This is quite different from the current, technologically achievable concept of virtual reality. Virtual reality is easily distinguished from the experience of actuality; participants are never in doubt about the nature of what they experience. Simulated reality, by contrast, would be hard or impossible to separate from "true" reality. There has been much debate over this topic, ranging from philosophical discourse to practical applications in computing. Types of simulation[edit] Brain-computer interface[edit] Virtual people[edit] In a virtual-people simulation, every inhabitant is a native of the simulated world. Arguments[edit] Simulation argument[edit] 1. 2. 3. Relativity of reality[edit] Computationalism[edit] Dreaming[edit] Related:  .caisson test

D-Wave Systems D-Wave Systems, Inc. is a quantum computing company, based in Burnaby, British Columbia. On May 11, 2011, D-Wave System announced D-Wave One, labeled "the world's first commercially available quantum computer," operating on a 128 qubit chip-set[1] using quantum annealing [2][3][4][5] to solve optimization problems. In May 2013 it was announced that a collaboration between NASA, Google and the Universities Space Research Association (USRA) launched a Quantum Artificial Intelligence Lab based on the D-Wave Two 512 qubit quantum computer that would be used for research into machine learning, among other fields of study.[6] The D-Wave One was built on early prototypes such as D-Wave's Orion Quantum Computer. Technology description[edit] D-Wave maintains a list of peer-reviewed technical publications on their website, authored by D-Wave scientists and by third party researchers. History[edit] Orion prototype[edit] According to Dr. 2009 Google demonstration[edit] D-Wave One computer system[edit]

VRML VRML (Virtual Reality Modeling Language, pronounced vermal or by its initials, originally—before 1995—known as the Virtual Reality Markup Language) is a standard file format for representing 3-dimensional (3D) interactive vector graphics, designed particularly with the World Wide Web in mind. It has been superseded by X3D.[1] WRL File Format Standardization The Web3D Consortium has been formed to further the collective development of the format. VRML (and its successor, X3D), have been accepted as international standards by the International Organization for Standardization (ISO). The first version of VRML was specified in November 1994. Emergence, popularity, and rival technical upgrade In 1997, a new version of the format was finalized, as VRML97 (also known as VRML2 or VRML 2.0), and became an ISO standard. SGI ran a web site at vrml.sgi.com on which was hosted a string of regular short performances of a character called "Floops" who was a VRML character in a VRML world. Alternatives

The Cyclic multiverse Lifelog Evolution of lifelogging apparatus, including wearable computer, camera, and viewfinder with wireless Internet connection. Early apparatus used separate transmitting and receiving antennas. Later apparatus evolved toward the appearance of ordinary eyeglasses in the late 1980s and early 1990s.[1] Evolution of the Lifelogging Necklace Lifeloggers (also known as lifebloggers or lifegloggers) typically wear computers in order to capture their entire lives, or large portions of their lives. Overview[edit] In this context, the first person to do lifelogging, i.e., to capture continuous physiological data together with live first-person video from a wearable camera, was Steve Mann whose experiments with wearable computing and streaming video in the early 1980s led to Wearable Wireless Webcam. Throughout the 1990s Mann presented this work to the U.S. In 2004 Arin Crumley and Susan Buice met online and began a relationship. Life caching and sharing lifelog information[edit] Manual Lifelogging[edit]

The Brane multiverse Conway's Game of Life "Conway game" redirects here. For Conway's surreal number game theory, see surreal number. The Game of Life, also known simply as Life, is a cellular automaton devised by the British mathematician John Horton Conway in 1970.[1] The "game" is a zero-player game, meaning that its evolution is determined by its initial state, requiring no further input. Rules[edit] The universe of the Game of Life is an infinite two-dimensional orthogonal grid of square cells, each of which is in one of two possible states, alive or dead. Any live cell with fewer than two live neighbours dies, as if caused by under-population.Any live cell with two or three live neighbours lives on to the next generation.Any live cell with more than three live neighbours dies, as if by overcrowding.Any dead cell with exactly three live neighbours becomes a live cell, as if by reproduction. The initial pattern constitutes the seed of the system. Origins[edit] Examples of patterns[edit] Gosper glider gun Self-replication[edit]

UCSB scientists discover how the brain encodes memories at a cellular level (Santa Barbara, Calif.) –– Scientists at UC Santa Barbara have made a major discovery in how the brain encodes memories. The finding, published in the December 24 issue of the journal Neuron, could eventually lead to the development of new drugs to aid memory. The team of scientists is the first to uncover a central process in encoding memories that occurs at the level of the synapse, where neurons connect with each other. "When we learn new things, when we store memories, there are a number of things that have to happen," said senior author Kenneth S. Kosik, co-director and Harriman Chair in Neuroscience Research, at UCSB's Neuroscience Research Institute. "One of the most important processes is that the synapses –– which cement those memories into place –– have to be strengthened," said Kosik. This is a neuron. (Photo Credit: Sourav Banerjee) Part of strengthening a synapse involves making new proteins. When the signal comes in, the wrapping protein degrades or gets fragmented.