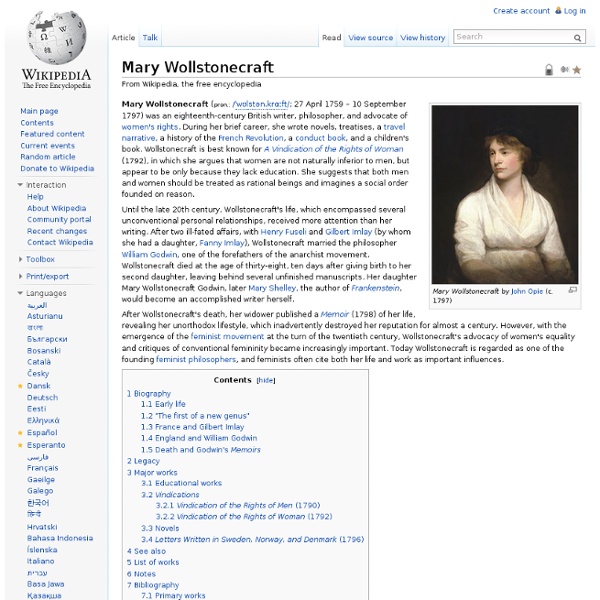 Mary Wollstonecraft (/ˈwʊlstən.krɑːft/; 27 April 1759 – 10 September 1797) was an eighteenth-century English writer, philosopher, and advocate of women's rights. During her brief career, she wrote novels, treatises, a travel narrative, a history of the French Revolution, a conduct book, and a children's book. Wollstonecraft is best known for A Vindication of the Rights of Woman (1792), in which she argues that women are not naturally inferior to men, but appear to be only because they lack education. She suggests that both men and women should be treated as rational beings and imagines a social order founded on reason. Until the late 20th century, Wollstonecraft's life, which encompassed several unconventional personal relationships, received more attention than her writing. After Wollstonecraft's death, her widower published a Memoir (1798) of her life, revealing her unorthodox lifestyle, which inadvertently destroyed her reputation for almost a century. Biography Early life Related:  Philosophers

Mary Shelley Mary Shelley (née Mary Wollstonecraft Godwin; 30 August 1797 – 1 February 1851) was an English novelist, short story writer, dramatist, essayist, biographer, and travel writer, best known for her Gothic novel Frankenstein: or, The Modern Prometheus (1818). She also edited and promoted the works of her husband, the Romantic poet and philosopher Percy Bysshe Shelley. Her father was the political philosopher William Godwin, and her mother was the philosopher and feminist Mary Wollstonecraft. Mary Godwin's mother died when she was eleven days old; afterwards, she and her older half-sister, Fanny Imlay, were raised by her father. When Mary was four, Godwin married his neighbour, Mary Jane Clairmont. Godwin provided his daughter with a rich, if informal, education, encouraging her to adhere to his liberal political theories. Biography Early life Page from William Godwin's journal recording "Birth of Mary, 20 minutes after 11 at night" (left column, four rows down) Percy Bysshe Shelley

Mary Wollstonecraft, 1759-1797 The Anglo-Irish feminist, intellectual and writer, Mary Wollstonecraft, was born in London, the second of six children. Her father, Edward John Wollstonecraft, was a family despot who bullied his wife, Elizabeth Dixon, into a state of wearied servitude. He spent a fortune which he had inherited in various unsuccessful ventures at farming which took the family to six different locales throughout Britain by 1780, the year Mary's mother died. At the age of nineteen Mary went out to earn her own livelihood. In 1788 she became translator and literary advisor to Joseph Johnson, the publisher of radical texts. In 1792, she published her Vindication on the Rights of Woman, an important work which, advocating equality of the sexes, and the main doctrines of the later women's movement, made her both famous and infamous in her own time. In 1792 she set out for Paris. | Return to the Lecture | | The History Guide | Feedback |

Carl Jung Carl Gustav Jung (/jʊŋ/; German: [ˈkarl ˈɡʊstaf jʊŋ]; 26 July 1875 – 6 June 1961), often referred to as C. G. Jung, was a Swiss psychiatrist and psychotherapist who founded analytical psychology.[2] Jung proposed and developed the concepts of the collective unconscious, archetypes, and extraversion and introversion. The central concept of analytical psychology is individuation—the psychological process of integrating the opposites, including the conscious with the unconscious, while still maintaining their relative autonomy.[3] Jung considered individuation to be the central process of human development.[4] Jung saw the human psyche as "by nature religious"[5] and made this religiousness the focus of his explorations.[6] Jung is one of the best known contemporary contributors to dream analysis and symbolization. Early years[edit] Childhood family[edit] Jung's mother left Laufen for several months of hospitalization near Basel for an unknown physical ailment. Childhood memories[edit]

Socrates Socrates (/ˈsɒkrətiːz/;[2] Greek: Σωκράτης [sɔːkrátɛːs], Sōkrátēs; 470/469 – 399 BC)[1] was a classical Greek (Athenian) philosopher credited as one of the founders of Western philosophy. He is an enigmatic figure known chiefly through the accounts of classical writers, especially the writings of his students Plato and Xenophon and the plays of his contemporary Aristophanes. Plato's dialogues are among the most comprehensive accounts of Socrates to survive from antiquity, though it is unclear the degree to which Socrates himself is "hidden behind his 'best disciple', Plato".[3] Through his portrayal in Plato's dialogues, Socrates has become renowned for his contribution to the field of ethics, and it is this Platonic Socrates who lends his name to the concepts of Socratic irony and the Socratic method, or elenchus. Socratic problem Nothing written by Socrates remains extant. Socrates as a figure Socrates as a philosopher Biography Early life Military service Arrest of Leon Trial and death Notes

Mary Wollstonecraft First published Wed Apr 16, 2008; substantive revision Tue Sep 17, 2013 Mary Wollstonecraft (1759–1797) was a moral and political theorist whose analysis of the condition of women in modern society retains much of its original radicalism. One of the reasons her pronouncements on the subject remain challenging is that her reflections on the status of the female sex were part of an attempt to come to a comprehensive understanding of human relations within a civilization increasingly governed by acquisitiveness. Her first publication was on the education of daughters; she went on to write about politics, history and various aspects of philosophy in a number of different genres that included critical reviews, translations, pamphlets, and novels. 1. The second of seven children, Mary Wollstonecraft was born in Spitalfields, London, on 27 April 1759, in a house in Primrose Street. In 1778, she was engaged as a companion to a Mrs Dawson and lived at Bath. Wollstonecraft had a girl by Imlay.

Epicurus Ancient Greek philosopher For Epicurus, the purpose of philosophy was to help people attain a happy, tranquil life characterized by ataraxia (peace and freedom from fear) and aponia (the absence of pain). He advocated that people were best able to pursue philosophy by living a self-sufficient life surrounded by friends. He taught that the root of all human neurosis is death denial and the tendency for human beings to assume that death will be horrific and painful, which he claimed causes unnecessary anxiety, selfish self-protective behaviors, and hypocrisy. Like Aristotle, Epicurus was an empiricist, meaning he believed that the senses are the only reliable source of knowledge about the world. Though popular, Epicurean teachings were controversial from the beginning. Life[edit] Upbringing and influences[edit] Map of Greece showing locations associated with Epicurus Teaching career[edit] Marble sculpture depicting Epicurus enthroned Death[edit] Teachings[edit] Epistemology[edit] Ethics[edit]

Ada Lovelace: Founder of Scientific Computing Born: London, England, December 10, 1815 Died: London, England, November 27, 1852 Ada Byron was the daughter of a brief marriage between the Romantic poet Lord Byron and Anne Isabelle Milbanke, who separated from Byron just a month after Ada was born. Four months later, Byron left England forever. Lady Byron wished her daughter to be unlike her poetical father, and she saw to it that Ada received tutoring in mathematics and music, as disciplines to counter dangerous poetic tendencies. Lady Byron and Ada moved in an elite London society, one in which gentlemen not members of the clergy or occupied with politics or the affairs of a regiment were quite likely to spend their time and fortunes pursuing botany, geology, or astronomy. One of the gentlemanly scientists of the era was to become Ada's lifelong friend. In 1835, Ada married William King, ten years her senior, and when King inherited a noble title in 1838, they became the Earl and Countess of Lovelace.

Conceptualism Conceptualism is a philosophical theory that explains universality of particulars as conceptualized frameworks situated within the thinking mind.[1] Intermediate between Nominalism and Realism, the conceptualist view approaches the metaphysical concept of universals from a perspective that denies their presence in particulars outside of the mind's perception of them. [2] Conceptualism in scholasticism[edit] The evolution of late scholastic terminology has led to the emergence of Conceptualism, which stemmed from doctrines that were previously considered to be nominalistic. The terminological distinction was made in order to stress the difference between the claim that universal mental acts correspond with universal intentional objects and the perspective that dismissed the existence of universals outside of the mind. The latter perspective of rejection of objective universality was distinctly defined as Conceptualism. Modern conceptualism[edit] Conceptualism and perceptual experience[edit]