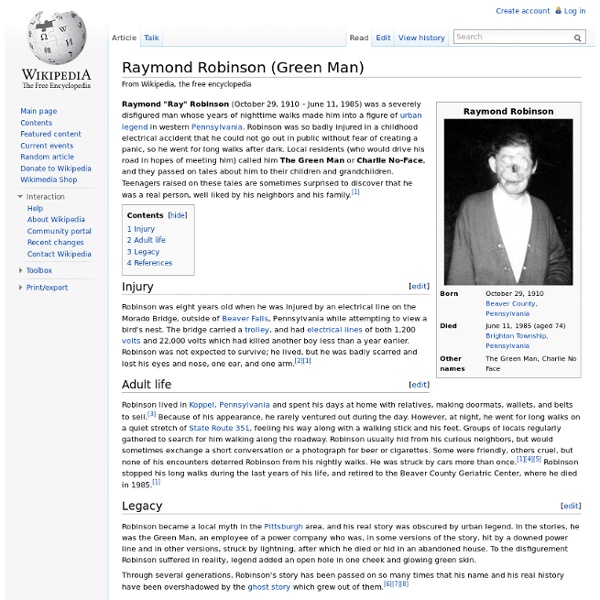 Raymond "Ray" Robinson (October 29, 1910 – June 11, 1985) was a severely disfigured man whose years of nighttime walks made him into a figure of urban legend in western Pennsylvania. Robinson was so badly injured in a childhood electrical accident that he could not go out in public without fear of creating a panic, so he went for long walks at night. Local residents, who would drive along his road in hopes of meeting him, called him The Green Man or Charlie No-Face. They passed on tales about him to their children and grandchildren, and people raised on these tales are sometimes surprised to discover that he was a real person who was liked by his family and neighbors.[1] Robinson was eight years old when he was injured by an electrical line on the Morado Bridge, outside of Beaver Falls, while attempting to view a bird's nest. Robinson became a local myth in the Pittsburgh area, and his real story was obscured by urban legend. Related:  Wiki: People

Lucretia Lucretia (/lʊˈkriːʃə/; died c. 510 BC (traditionally)) is a semi-legendary figure in the history of the Roman Republic. According to the story, told mainly by two turn-of-the-millennium historians, the Roman Livy and the Greek historian Dionysius of Halicarnassus (who lived in Rome at the time of the Roman Emperor Caesar Augustus), her rape by the Etruscan king's son and consequent suicide were the immediate cause of the revolution that overthrew the monarchy and established the Roman Republic. The beginning of the Republic is marked by the first appearance of the two consuls elected on a yearly basis. The Romans recorded events by consular year, keeping an official list in various forms called the fasti, used by Roman historians. This list confirms that there was a Roman Republic, that it began at the beginning of the fasti, and that it supplanted a monarchy. As the events of the story move rapidly, the date of the incident is probably the same year as the first of the fasti.

Freaky Fractal Fingers, Fingers, Fingers In his 1941 novel Methuselah's Children, science fiction author Robert Heinlein writes about a human baby modified by an alien race. The baby was given the following "improvements" (among others): "...it's body architecture has been redesigned for greater efficiency, our useless simian hangovers have been left out, and its organs have been rearranged in a more sensible fashion. You can't say it's not human, for it is... an improved model. Take that extra appendage at the wrist. That's another hand, a miniature one... backed up by a microscopic eye. Heinlein also pursued similar ideas a bit earlier in his 1940 novella Waldo, his story about, well, waldoes - he originated the concept as well as the term. Roboticist Hans Moravec conceived of a more "fractal" version of this idea; a "bush robot" (also called a "Fractal branching ultra-dexterous robot") that literally had manipulators on its manipulators on its manipulators... you get the idea. (Moravec Bush Robot simulation)

Recency illusion The recency illusion is the belief or impression that a word or language usage is of recent origin when it is in fact long-established. The term was invented by Arnold Zwicky, a linguist at Stanford University who was primarily interested in examples involving words, meanings, phrases, and grammatical constructions.[1] However, use of the term is not restricted to linguistic phenomena: Zwicky has defined it simply as, "the belief that things you have noticed only recently are in fact recent".[2] Linguistic items prone to the Recency Illusion include: "Singular they" - the use of they to reference a singular antecedent, as in someone said they liked the play. According to Zwicky, the illusion is caused by selective attention.[2] References[edit] Jump up ^ Intensive and Quotative ALL: something old, something new, John R. External links[edit]

Genie (feral child) Genie (born 1957) is the pseudonym of a feral child who was the victim of extraordinarily severe abuse, neglect and social isolation. Her circumstances are recorded prominently in the annals of abnormal child psychology.[2] Born in Arcadia, California, United States, Genie's father kept her locked alone in a room from the age of 20 months to 13 years, 7 months, almost always strapped to a child's toilet or bound in a crib with her arms and legs completely immobilized. During this time she was never exposed to any significant amount of speech, and as a result she did not acquire a first language during childhood. Her abuse came to the attention of Los Angeles child welfare authorities on November 4, 1970.[3][4] In the first several years after Genie's life and circumstances came to light, psychologists, linguists and other scientists focused a great deal of attention on Genie's case, seeing in her near-total isolation an opportunity to study many aspects of human development.

Family tree of the Greek gods Key: The essential Olympians' names are given in bold font. See also List of Greek mythological figures Notes External links Media related to Family trees of Greek mythology at Wikimedia Commons James Barry James Miranda Stuart Barry (c. 1789-1799 – 25 July 1865, born Margaret Ann Bulkley), was a military surgeon in the British Army. After graduation from the University of Edinburgh Medical School, Barry served in India and Cape Town, South Africa. By the end of his career, he had risen to the rank of Inspector General in charge of military hospitals. In his travels he not only improved conditions for wounded soldiers, but also the conditions of the native inhabitants. Although Barry lived his adult life as a man, it is believed that at birth he was identified or assigned as female and named Margaret Ann Bulkley,[2] and that he chose to live as a man so that he might be accepted as a university student and able to pursue a career as a surgeon.[1] Information about Barry's early life has been rife with myth and speculation; with no contemporary records known. Portrait of James Barry, painted circa 1813-1816 In a couple of weeks he became the Medical Inspector for the colony.

Behind the Secret of the Naga's Fire It was dusk when the first fireball burst from the Mekong. A glowing pink orb hovered over the chocolaty waters for a split second then accelerated noiselessly skyward, winking out some 100 meters above. Minutes later, another soared from the roiling river. Then some way downstream, a string of four burst into a bruised sky that was looking angrier by the moment. Each tiny eruption was greeted with a jubilant roar, like a kickboxing crowd hailing a series of withering knee strikes. Subscribe Now Get TIME the way you want it One Week Digital Pass — $4.99 Monthly Pay-As-You-Go DIGITAL ACCESS — $2.99 One Year ALL ACCESS — Just $30! Welcome to Strangeusa.com! Victor of Aveyron Victor of Aveyron (c. 1788 – 1828) was a French feral child who was found in 1800 after apparently spending the majority of his childhood alone in the woods. Upon his discovery, his case was taken up by a young physician, Jean Marc Gaspard Itard, who worked with the boy for five years and gave him his name, Victor. Itard was interested in determining what Victor could learn. He devised procedures to teach the boy words and recorded his progress. Early life[edit] Victor is estimated to have been born around 1788. Study[edit] Victor of Aveyron Shortly after Victor was found, a local abbot and biology professor, Pierre Joseph Bonnaterre, examined him. Influence of the Enlightenment[edit] The Enlightenment caused many thinkers, including naturalists and philosophers, to believe human nature was a subject that needed to be redefined and looked at from a completely different angle. Influence of colonialism[edit] Education[edit] Jean Marc Gaspard Itard[edit] Language[edit] Dramatization[edit] [edit]

Mary I of England Mary I (18 February 1516 – 17 November 1558) was Queen of England and Ireland from July 1553 until her death. Her executions of Protestants caused her opponents to give her the sobriquet "Bloody Mary". She was the only child of Henry VIII and his first wife Catherine of Aragon who survived to adulthood. As the fourth crowned monarch of the Tudor dynasty, Mary is remembered for her restoration of Roman Catholicism after the short-lived Protestant reign of her half-brother. Birth and family[edit] Education and marriage plans[edit] Mary at the time of her engagement to Charles V. Throughout Mary's childhood, Henry negotiated potential future marriages for her. Adolescence[edit] Adulthood[edit] In 1536, Queen Anne fell from the king's favour and was beheaded. Mary in 1544 In 1547, Henry died and Edward succeeded as Edward VI. Accession[edit] On 10 July 1553, Lady Jane was proclaimed queen by Dudley and his supporters, and on the same day Mary's letter to the council arrived in London.

Mistaken Identity In 1903, a prisoner named Will West arrived at Leavenworth. The record clerk took the photographs above and, thinking he remembered West, asked whether he had been there before. West said no. The clerk took some measurements, went to the file, and produced this record, bearing the name William West: Amazed, the prisoner said, “That’s my picture, but I don’t know where you got it, for I know I have never been here before.” Incredibly, this was true. The case became a strong argument in favor of the new science of fingerprinting.

List of common misconceptions From Wikipedia, the free encyclopedia This incomplete list is not intended to be exhaustive. This list corrects erroneous beliefs that are currently widely held about notable topics. Arts and culture Food and cooking Roll-style Western sushi. Searing meat does not "seal in" moisture, and in fact may actually cause meat to lose moisture. Legislation and crime Literature The Harry Potter books, though they have broken children's book publishing records, have not led to an increase in reading among children or adults, nor slowed the ongoing overall decline in book purchases by Americans, and children who did read the Harry Potter books were not more likely to go on to read more outside of the fantasy and mystery genres.[21][22][23][24] Music Religion Hebrew Bible The forbidden fruit mentioned in the Book of Genesis is commonly assumed to be an apple,[27] and is widely depicted as such in Western art. Buddhism The historical Buddha was not obese. Christianity Islam Sports Words and phrases History Biology

Luigi Russolo Biography[edit] Luigi Russolo was perhaps the first noise artist.[3][4] His 1913 manifesto, L'Arte dei Rumori, translated as The Art of Noises, stated that the industrial revolution had given modern men a greater capacity to appreciate more complex sounds. Russolo found traditional melodic music confining and envisioned noise music as its future replacement. He designed and constructed a number of noise-generating devices called Intonarumori and assembled a noise orchestra to perform with them. A performance of his Gran Concerto Futuristico (1917) was met with strong disapproval and violence from the audience, as Russolo himself had predicted. At first the art of music sought purity, limpidity and sweetness of sound. Russolo and Marinetti gave the first concert of Futurist music, complete with intonarumori, in April 1914 (causing a riot).[9] The program comprised four "networks of noises" with the following titles: Intonarumori reconstruction[edit] See also[edit] Further reading[edit] [edit]