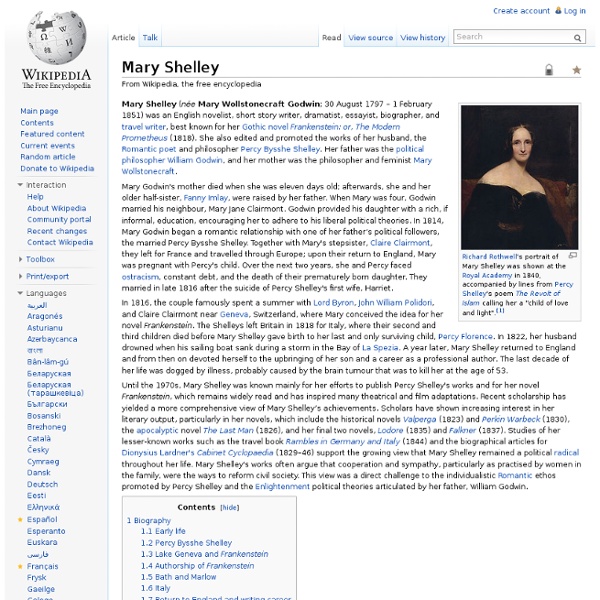 Mary Shelley (née Mary Wollstonecraft Godwin; 30 August 1797 – 1 February 1851) was an English novelist, short story writer, dramatist, essayist, biographer, and travel writer, best known for her Gothic novel Frankenstein: or, The Modern Prometheus (1818). She also edited and promoted the works of her husband, the Romantic poet and philosopher Percy Bysshe Shelley. Her father was the political philosopher William Godwin, and her mother was the philosopher and feminist Mary Wollstonecraft. Mary Godwin's mother died when she was eleven days old; afterwards, she and her older half-sister, Fanny Imlay, were raised by her father. When Mary was four, Godwin married his neighbour, Mary Jane Clairmont. In 1816, the couple famously spent a summer with Lord Byron, John William Polidori, and Claire Clairmont near Geneva, Switzerland, where Mary conceived the idea for her novel Frankenstein. Biography Early life Mary Shelley was born Mary Wollstonecraft Godwin in Somers Town, London, in 1797.

Mary Wollstonecraft First published Wed Apr 16, 2008; substantive revision Tue Sep 17, 2013 Mary Wollstonecraft (1759–1797) was a moral and political theorist whose analysis of the condition of women in modern society retains much of its original radicalism. One of the reasons her pronouncements on the subject remain challenging is that her reflections on the status of the female sex were part of an attempt to come to a comprehensive understanding of human relations within a civilization increasingly governed by acquisitiveness. Her first publication was on the education of daughters; she went on to write about politics, history and various aspects of philosophy in a number of different genres that included critical reviews, translations, pamphlets, and novels. 1. The second of seven children, Mary Wollstonecraft was born in Spitalfields, London, on 27 April 1759, in a house in Primrose Street. In 1778, she was engaged as a companion to a Mrs Dawson and lived at Bath. Wollstonecraft had a girl by Imlay.

Horror Films Horror Films are unsettling films designed to frighten and panic, cause dread and alarm, and to invoke our hidden worst fears, often in a terrifying, shocking finale, while captivating and entertaining us at the same time in a cathartic experience. Horror films effectively center on the dark side of life, the forbidden, and strange and alarming events. They deal with our most primal nature and its fears: our nightmares, our vulnerability, our alienation, our revulsions, our terror of the unknown, our fear of death and dismemberment, loss of identity, or fear of sexuality. Whatever dark, primitive, and revolting traits that simultaneously attract and repel us are featured in the horror genre. Introduction to Horror Films Genre: Horror films go back as far as the onset of films themselves, over a 100 years ago. Of necessity, the earliest horror films were Gothic in style - meaning that they were usually set in spooky old mansions, castles, or fog-shrouded, dark and shadowy locales.

Friedrich Nietzsche Friedrich Wilhelm Nietzsche (/ˈniːtʃə/[1] or /ˈniːtʃi/;[2] German: [ˈfʁiːdʁɪç ˈvɪlhɛlm ˈniːt͡sʃə]; 15 October 1844 – 25 August 1900) was a German philosopher, cultural critic, poet, composer and Latin and Greek scholar. He wrote several critical texts on religion, morality, contemporary culture, philosophy and science, displaying a fondness for metaphor[3] and irony. Nietzsche's key ideas include perspectivism, the will to power, the death of God, the Übermensch and eternal recurrence. Nietzsche began his career as a classical philologist—a scholar of Greek and Roman textual criticism—before turning to philosophy. As his caretaker, his sister assumed the roles of curator and editor of Nietzsche's manuscripts. Life[edit] Youth (1844–69)[edit] Born on 15 October 1844, Nietzsche grew up in the small town of Röcken, near Leipzig, in the Prussian Province of Saxony. While at Pforta, Nietzsche had a penchant for pursuing subjects that were considered unbecoming. Nietzsche in his younger days

The Life of Mary Shelley You are here: Home / Essays / The Life of Mary Shelley Mary Shelley, born August 30, 1797, was a prominent, though often overlooked, literary figure during the Romantic Era of English Literature. She was the only child of Mary Wollstonecraft, the famous feminist, and William Godwin, a philosopher and novelist. She was also the wife of the poet Percy Bysshe Shelley. Mary’s parents were shapers of the Romantic sensibility and the revolutionary ideas of the left wing. Mary was born during the eighth year of the French Revolution. Coleridge made his first visit when Mary was two years old. A peculiar sort of Gothicism was part of Mary’s earliest existence. At the age of sixteen Mary ran away to live with the twenty-one year old Percy Shelley, the unhappily married radical heir to a wealthy baronetcy. She conceived of Frankenstein during one of the most famous house parties in literary history when staying at Lake Geneva in Switzerland with Byron and Shelley. Print This Page

Robert Louis Stevenson A literary celebrity during his lifetime, Stevenson now ranks among the 26 most translated authors in the world.[1] His works have been admired by many other writers, including Jorge Luis Borges, Bertolt Brecht, Marcel Proust, Arthur Conan Doyle, Henry James, Cesare Pavese, Ernest Hemingway, Rudyard Kipling, Jack London, Vladimir Nabokov,[2] J. M. Barrie,[3] and G. K. Chesterton, who said of him that he "seemed to pick the right word up on the point of his pen, like a man playing spillikins Life[edit] Childhood and youth[edit] Daguerreotype portrait of Robert Louis Stevenson as a young child Stevenson's childhood home in Heriot Row Lewis Balfour and his daughter both had weak chests, so they often needed to stay in warmer climates for their health. Stevenson's parents were both devout and serious Presbyterians, but the household was not strict in its adherence to Calvinist principles. Robert Louis Stevenson at the age of seven Education[edit] What a damned curse I am to my parents!

Ada Lovelace: Founder of Scientific Computing Born: London, England, December 10, 1815 Died: London, England, November 27, 1852 Ada Byron was the daughter of a brief marriage between the Romantic poet Lord Byron and Anne Isabelle Milbanke, who separated from Byron just a month after Ada was born. Lady Byron wished her daughter to be unlike her poetical father, and she saw to it that Ada received tutoring in mathematics and music, as disciplines to counter dangerous poetic tendencies. Lady Byron and Ada moved in an elite London society, one in which gentlemen not members of the clergy or occupied with politics or the affairs of a regiment were quite likely to spend their time and fortunes pursuing botany, geology, or astronomy. One of the gentlemanly scientists of the era was to become Ada's lifelong friend. In 1835, Ada married William King, ten years her senior, and when King inherited a noble title in 1838, they became the Earl and Countess of Lovelace.

Frankenstein Despite what Hollywood wants you to think, there was no flash of lightning, no bolt through the head, no scientist crying "It's alive!," and no flat-top haircut. (Oh, and the monster wasn't named Frankenstein.) But if you ask us, the real story of Frankenstein is way, way cooler: During the summer of 1816, eighteen-year-old Mary Wollstonecraft Godwin was hanging out in a Swiss lake house with her lover and future husband Percy Bysshe Shelley; famous English poet, Lord Byron; and Byron's doctor John Polidori. (And some others, but those are the important names.) So, you're bored out of your skull in a lakeside villa with two of the most famous writers in all of English literature. You have a ghost story contest. Lord Byron challenged everyone to write the scariest, freakiest, spookiest story they could come up with. Let's back up for a second: Mary Wollstonecraft Godwin wasn't just any eighteen-year-old. Should there be limits to scientific inquiry?

Carl Jung Carl Gustav Jung (/jʊŋ/; German: [ˈkarl ˈɡʊstaf jʊŋ]; 26 July 1875 – 6 June 1961), often referred to as C. G. Jung, was a Swiss psychiatrist and psychotherapist who founded analytical psychology.[2] Jung proposed and developed the concepts of the collective unconscious, archetypes, and extraversion and introversion. The central concept of analytical psychology is individuation—the psychological process of integrating the opposites, including the conscious with the unconscious, while still maintaining their relative autonomy.[3] Jung considered individuation to be the central process of human development.[4] Jung saw the human psyche as "by nature religious"[5] and made this religiousness the focus of his explorations.[6] Jung is one of the best known contemporary contributors to dream analysis and symbolization. Early years[edit] Childhood family[edit] Jung's mother left Laufen for several months of hospitalization near Basel for an unknown physical ailment. Childhood memories[edit]

Frankenstein by Mary Wollstonecraft Shelley tes me to heaven, for nothing contributes so much to tranquillize the mind as a steady purpose--a point on which the soul may fix its intellectual eye. This expedition has been the favourite dream of my early years. I have read with ardour the accounts of the various voyages which have been made in the prospect of arriving at the North Pacific Ocean through the seas which surround the pole. You may remember that a history of all the voyages made for purposes of discovery composed the whole of our good Uncle Thomas' library. My education was neglected, yet I was passionately fond of reading. These visions faded when I perused, for the first time, those poets whose effusions entranced my soul and lifted it to heaven.

Strange Case of Dr Jekyll and Mr Hyde Strange Case of Dr Jekyll and Mr Hyde is the original title of a novella written by the Scottish author Robert Louis Stevenson that was first published in 1886. The work is commonly known today as The Strange Case of Dr. Jekyll and Mr. Hyde, Dr. Jekyll and Mr. The work is commonly associated with the rare mental condition often spuriously called "split personality", referred to in psychiatry as dissociative identity disorder, where within the same body there exists more than one distinct personality.[4] In this case, there are two personalities within Dr Jekyll, one apparently good and the other evil; completely opposite levels of morality. Inspiration and writing[edit] Robert Louis Stevenson "In the small hours of one morning,[...]I was awakened by cries of horror from Louis. Lloyd Osbourne, Stevenson's stepson, wrote: "I don't believe that there was ever such a literary feat before as the writing of Dr Jekyll. Stevenson re-wrote the story in three to six days. Plot[edit] Characters[edit]