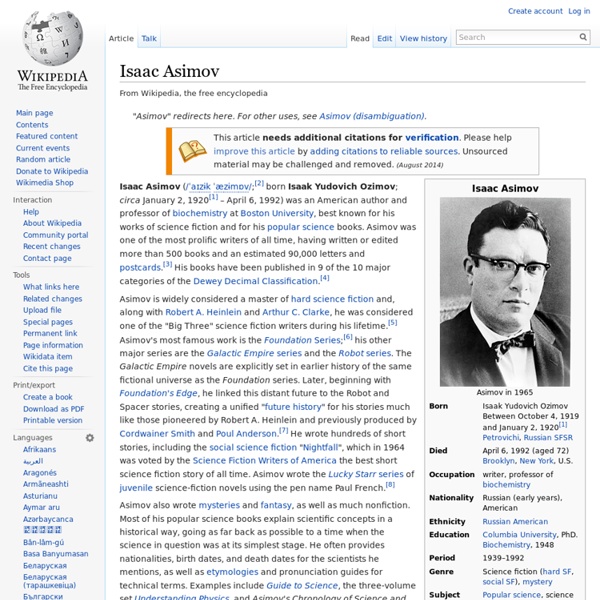 Isaac Asimov (/ˈaɪzɨk ˈæzɨmɒv/;[2] born Isaak Yudovich Ozimov; circa January 2, 1920[1] – April 6, 1992) was an American author and professor of biochemistry at Boston University, best known for his works of science fiction and for his popular science books. Asimov was one of the most prolific writers of all time, having written or edited more than 500 books and an estimated 90,000 letters and postcards.[3] His books have been published in 9 of the 10 major categories of the Dewey Decimal Classification.[4] Asimov also wrote mysteries and fantasy, as well as much nonfiction. Most of his popular science books explain scientific concepts in a historical way, going as far back as possible to a time when the science in question was at its simplest stage. He often provides nationalities, birth dates, and death dates for the scientists he mentions, as well as etymologies and pronunciation guides for technical terms. Biography[edit] Early life[edit] Education and career[edit] Personal life[edit]

Dystopian Fiction's Popularity Is a Warning Sign for the Future Ed Kashi Dystopian fiction is hot right now, with countless books and movies featuring decadent oligarchs, brutal police states, ecological collapse, and ordinary citizens biting and clawing just to survive. For bestselling author Naomi Klein, all this gloom is a worrying sign. Leigh Brackett Life[edit] Leigh Brackett was born December 7, 1915 in Los Angeles, California and grew up there. On December 31, 1946, at age 31, she married Edmond Hamilton in San Gabriel, California, and moved with him to Kinsman, Ohio. She died of cancer in 1978 in Lancaster, California.[1] Career[edit]

Lucius Shepard Lucius Shepard (August 21, 1943 – March 18, 2014) was an American writer. Classified as a science fiction and fantasy writer, he often leaned into other genres, such as magical realism. His work is infused with a political and historical sensibility and an awareness of literary antecedents. Arthur C. Clarke Sir Arthur Charles Clarke, CBE, FRAS (Sri Lankabhimanya Arthur Charles Clarke) (16 December 1917 – 19 March 2008) was a British science fiction writer, science writer,[3] inventor, undersea explorer, and television series host.[4] Clarke was a lifelong proponent of space travel. In 1934 while still a teenager, he joined the British Interplanetary Society. In 1945, he proposed a satellite communication system—an idea that, in 1963, won him the Franklin Institute's Stuart Ballantine Medal.[7][8] Later he was the chairman of the British Interplanetary Society from 1946–47 and again in 1951–53.[9][10]

A. E. van Vogt Alfred Elton van Vogt (/vænvoʊt/; April 26, 1912 – January 26, 2000) was a Canadian-born science fiction author regarded as one of the most popular and complex[1] science fiction writers of the mid-twentieth century: the "Golden Age" of the genre. Early life and writings[edit] Van Vogt was born on a farm in Edenburg, a Russian Mennonite community east of Gretna, Manitoba, Canada. David Brin Glen David Brin (born October 6, 1950) is an American scientist and award-winning author of science fiction. He has received the Hugo,[1][2] Locus,[3][4][5] Campbell[6] and Nebula Awards.[7] His Campbell Award winning novel The Postman was adapted as a feature film and starred Kevin Costner in 1997. David Brin's nonfiction book The Transparent Society won the Freedom of Speech Award of the American Library Association and the McGannon Communication Award.

The man who foresaw science fiction It is September 1, 2660, and a genius sits in his study, resting up prior to a remarkable display of his scientific prowess. Tomorrow he will demonstrate to scientists that a dog three years technically dead, but preserved with rare elements, can be resuscitated back to life by a simple blood transfusion. He stretches, revealing a huge frame, much taller than the average human, his height approaching that of extraterrestrials. "His physical superiority, however, was as nothing compared to his gigantic mind," explained his biographer. C. S. Lewis Lewis and fellow novelist J. R. R. Tolkien were close friends. Both authors served on the English faculty at Oxford University, and both were active in the informal Oxford literary group known as the "Inklings".