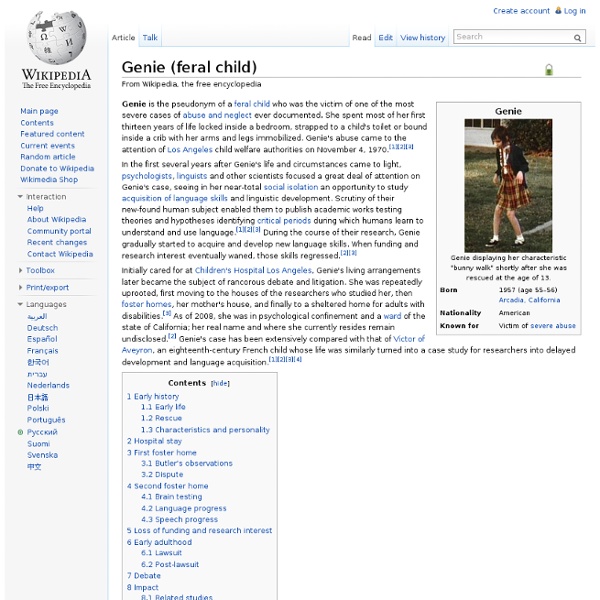 Genie (born 1957) is the pseudonym of a feral child who was the victim of extraordinarily severe abuse, neglect and social isolation. Her circumstances are recorded prominently in the annals of abnormal child psychology.[2] Born in Arcadia, California, United States, Genie's father kept her locked alone in a room from the age of 20 months to 13 years, 7 months, almost always strapped to a child's toilet or bound in a crib with her arms and legs completely immobilized. During this time she was never exposed to any significant amount of speech, and as a result she did not acquire a first language during childhood. Her abuse came to the attention of Los Angeles child welfare authorities on November 4, 1970.[3][4] In the first several years after Genie's life and circumstances came to light, psychologists, linguists and other scientists focused a great deal of attention on Genie's case, seeing in her near-total isolation an opportunity to study many aspects of human development. Related:  Wiki: People

Olga of Kiev Saint Olga (Old Church Slavonic: Ольга, hypothetically Old Norse: Helga[1] born c. 890 died 11 July 969, Kiev) was a ruler of Kievan Rus' as regent (945–c. 963) for her son, Svyatoslav. Early life[edit] Olga was a Pskov woman of Varangian extraction who married the future Igor of Kiev, arguably in 903. Drevlian Uprising[edit] The following account is taken from the Primary Chronicle. With the best and wisest men out of the way, she planned to destroy the remaining Drevlians. Now Olga gave to each soldier in her army a pigeon or a sparrow, and ordered them to attach by thread to each pigeon and sparrow a piece of sulfur bound with small pieces of cloth. Regency[edit] In 947, Princess Olga launched a punitive expedition against the tribal elites between the Luga and the Msta River.[3] Following this successful campaign, a number of forts were erected at Olga’s orders. Christianity[edit] Princess Olga meets the body of her husband. Relations with the Holy Roman Emperor[edit] See also[edit]

The girl in the window Part One: The Feral Child PLANT CITY — The family had lived in the rundown rental house for almost three years when someone first saw a child's face in the window. A little girl, pale, with dark eyes, lifted a dirty blanket above the broken glass and peered out, one neighbor remembered. Everyone knew a woman lived in the house with her boyfriend and two adult sons. The girl looked young, 5 or 6, and thin. The child stared into the square of sunlight, then slipped away. Months went by. Just before noon on July 13, 2005, a Plant City police car pulled up outside that shattered window. Clutching his stomach, the rookie retched in the weeds. Plant City Detective Mark Holste had been on the force for 18 years when he and his young partner were sent to the house on Old Sydney Road to stand by during a child abuse investigation. They found a car parked outside. "Unbelievable," she told Holste. The police officers walked through the front door, into a cramped living room. The girl didn't struggle.

Victor of Aveyron Victor of Aveyron (c. 1788 – 1828) was a French feral child who was found in 1800 after apparently spending the majority of his childhood alone in the woods. Upon his discovery, his case was taken up by a young physician, Jean Marc Gaspard Itard, who worked with the boy for five years and gave him his name, Victor. Itard was interested in determining what Victor could learn. He devised procedures to teach the boy words and recorded his progress. Based on his work with Victor, Itard broke new ground in the education of the developmentally delayed. Early life[edit] Victor is estimated to have been born around 1788. Study[edit] Victor of Aveyron Shortly after Victor was found, a local abbot and biology professor, Pierre Joseph Bonnaterre, examined him. Influence of the Enlightenment[edit] The Enlightenment caused many thinkers, including naturalists and philosophers, to believe human nature was a subject that needed to be redefined and looked at from a completely different angle. [edit]

Amelia Dyer Amelia Elizabeth Dyer (née Hobley; 1837 – 10 June 1896) was the most prolific baby farm murderer of Victorian England.[1][2] She was tried and hanged for one murder, but there is little doubt she was responsible for many more similar deaths—possibly 400 or more[3]—over a period of perhaps 20 years.[4] Background[edit] Unlike many of her generation, Dyer was not the product of grinding poverty. After her mother's death Amelia lived with an aunt in Bristol for a while, before serving an apprenticeship with a corset maker. Nursing[edit] The predicament of the parents involved was often exploited for financial gain: if a baby had well-off parents who were simply anxious to keep the birth secret, the single fee might be as much as £80. £50 might be negotiated if the father of the child wanted to hush up his involvement. Unscrupulous careers resorted to starving the farmed-out babies, to save money and even to hasten death. This was the world opened up to her by the now-departed Ellen Danes.

Are musicians our external brains? Thats pretty hipster of you. You should appreciate the fact that the people that are making the music you love are getting a nice paycheck. Are you just trolling me out of spite, now, or what? No - yours was the first comment (well at the top of the page) - and I felt the need to interject. I never said they were selling out, and indeed, I am very happy they're getting paid and widely recognized. I like the Black Keys, and I'm happy they're successful, but there is such a thing as too much success, particularly in the music business. In an unrelated note: it's generally poor form to tell people what they should and shouldn't do; just FYI.

Raymond Robinson (Green Man) Raymond "Ray" Robinson (October 29, 1910 – June 11, 1985) was a severely disfigured man whose years of nighttime walks made him into a figure of urban legend in western Pennsylvania. Robinson was so badly injured in a childhood electrical accident that he could not go out in public without fear of creating a panic, so he went for long walks at night. Local residents, who would drive along his road in hopes of meeting him, called him The Green Man or Charlie No-Face. They passed on tales about him to their children and grandchildren, and people raised on these tales are sometimes surprised to discover that he was a real person who was liked by his family and neighbors.[1] Robinson was eight years old when he was injured by an electrical line on the Morado Bridge, outside of Beaver Falls, while attempting to view a bird's nest. The bridge carried a trolley and had electrical lines of both 1,200 volts and 22,000 volts, which had killed another boy less than a year earlier.

Mary I of England Mary I (18 February 1516 – 17 November 1558) was Queen of England and Ireland from July 1553 until her death. Her executions of Protestants caused her opponents to give her the sobriquet "Bloody Mary". She was the only child of Henry VIII and his first wife Catherine of Aragon who survived to adulthood. Her younger half-brother, Edward VI, succeeded Henry in 1547. When Edward became mortally ill in 1553, he attempted to remove Mary from the line of succession because of religious differences. As the fourth crowned monarch of the Tudor dynasty, Mary is remembered for her restoration of Roman Catholicism after the short-lived Protestant reign of her half-brother. Birth and family[edit] Education and marriage plans[edit] Mary at the time of her engagement to Charles V. Throughout Mary's childhood, Henry negotiated potential future marriages for her. Adolescence[edit] Adulthood[edit] In 1536, Queen Anne fell from the king's favour and was beheaded. Mary in 1544 Accession[edit]

Can You Call a 9-Year-Old a Psychopath? Michael’s problems started, according to his mother, around age 3, shortly after his brother Allan was born. At the time, she said, Michael was mostly just acting “like a brat,” but his behavior soon escalated to throwing tantrums during which he would scream and shriek inconsolably. These weren’t ordinary toddler’s fits. “It wasn’t, ‘I’m tired’ or ‘I’m frustrated’ — the normal things kids do,” Anne remembered. When Anne and Miguel first took Michael to see a therapist, he was given a diagnosis of “firstborn syndrome”: acting out because he resented his new sibling. By the time he turned 5, Michael had developed an uncanny ability to switch from full-blown anger to moments of pure rationality or calculated charm — a facility that Anne describes as deeply unsettling. Anne and Miguel live in a small coastal town south of Miami, the kind of place where children ride their bikes on well-maintained cul-de-sacs. At 37, Anne is voluble and frank. It certainly seemed so.