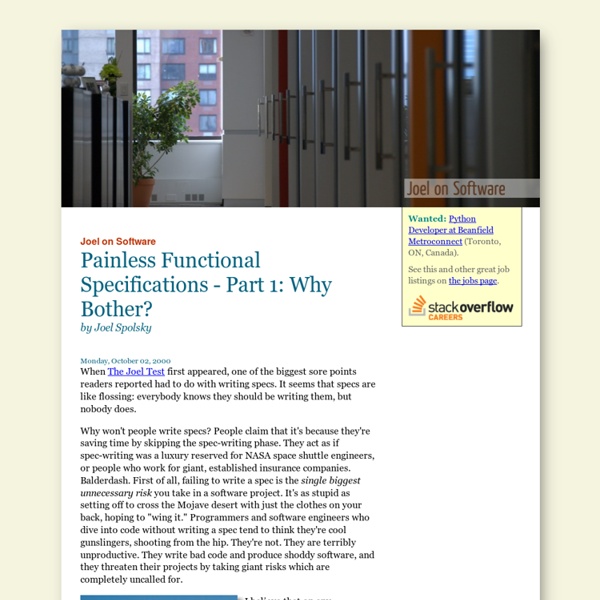 .NET Design Patterns in C# and VB.NET - Gang of Four (GOF) - DoFactory Design patterns are solutions to software design problems you find again and again in real-world application development. Patterns are about reusable designs and interactions of objects. The 23 Gang of Four (GoF) patterns are generally considered the foundation for all other patterns. They are categorized in three groups: Creational, Structural, and Behavioral (for a complete list see below). To give you a head start, the C# source code for each pattern is provided in 2 forms: structural and real-world. A third form, .NET optimized, demonstrates design patterns that fully exploit built-in .NET 4.5 features, such as, generics, attributes, delegates, reflection, and more.

Model-View-ViewModel (MVVM) Applications: General Introduction - Ivo Manolov&#39;s Blog MVVM is a central concept in WPF, Silverlight, WindowsPhone and Windows 8 development, so I decided to take some time and bubble up some of the content in the WPF MVVM Toolkit, which we created some time ago. Model-View separation is by no means a novel idea in the software engineering industry—the idea has been around for at least 25 years. In the past few years, there has been a lot of interest in model-view architectures, fuelled both by the growing complexity of modern software systems and by the necessity to display UI on various devices, while reusing the same underlying business logic. This post outlines the benefits of model-view separation. It is essentially the same content as the content included in Part 1 of the documentation, which goes with the WPF MVVM Toolkit. A well-designed application is an application that is easy to develop, test, maintain, and evolve. Model-View-Controller (MVC) is the granddaddy of them all, dating back to 1979. 2.1. 2.2. 2.3. 2.4. 2.5.

THE MODEL-VIEW-VIEWMODEL (MVVM) DESIGN PATTERN FOR WPF Patterns WPF Apps With The Model-View-ViewModel Design Pattern Josh Smith Developing the user interface of a professional software application is not easy. There are popular design patterns that can help to tame this unwieldy beast, but properly separating and addressing the multitude of concerns can be difficult. It is not always the design patterns at fault. As the software world continues to adopt WPF at an increasing rate, the WPF community has been developing its own ecosystem of patterns and practices. By the end of this article, it will be clear how data templates, commands, data binding, the resource system, and the MVVM pattern all fit together to create a simple, testable, robust framework on which any WPF application can thrive. Order vs. It is unnecessary and counterproductive to use design patterns in a simple "Hello, World!" Developers often intentionally structure their code according to a design pattern, as opposed to letting the patterns emerge organically.