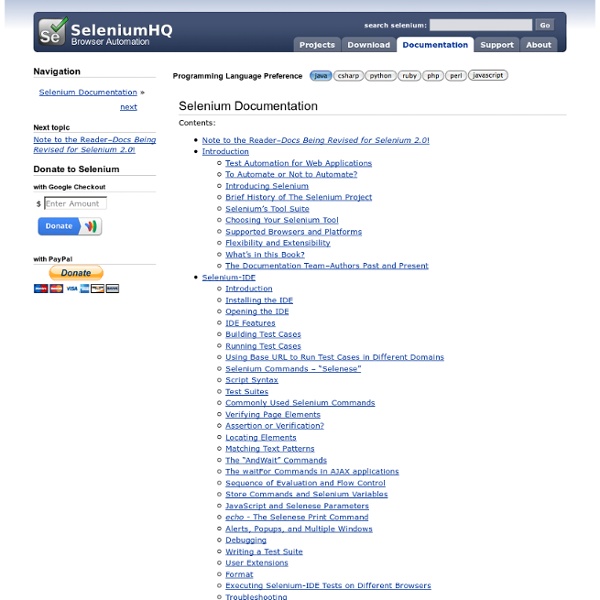 Selenium - Web Browser Automation File Downloads With Selenium — Mission Impossible? | blog.codecentric.de When starting to automate acceptance tests that include a web UI, you probably will hit a wall quite quickly: how to verify a document that is available for download against some criteria? If you tried that one you know: doing file downloads automatically seems to be a mission impossible … or … is it really? Frequent weapon of choice for testing web UIs is Selenium. File download: The download dialog is native in all browsers and cannot be controled with JavaScript. Approaches to solve the download problem The problem of file downloads with Selenium can be tackled in various ways. 1. This might eventually work, but I found it to be techical overkill. 2. Well, that could work. 3. Problem solved? Conclusion: download problem Finally we can conclude, that it is possible to download files, but it’s a piece of work and eventually new tools are necessary. What was the other problem again? Approaches to solve the file transfer problem Well, admitted, that’s not a real problem. Problem solved

Downloads Below is where you can find the latest releases of all the Selenium components. You can also find a list of previous releases, source code, and additional information for Maven users (Maven is a popular Java build tool). Selenium Standalone Server The Selenium Server is needed in order to run Remote Selenium WebDriver. Download version 3.3.1 To run Selenium tests exported from IDE, use the Selenium Html Runner. To use the Selenium Server in a Grid configuration see the wiki page. The Internet Explorer Driver Server This is required if you want to make use of the latest and greatest features of the WebDriver InternetExplorerDriver. Download version 3.3 for (recommended) 32 bit Windows IE or 64 bit Windows IE CHANGELOG Selenium Client & WebDriver Language Bindings In order to create scripts that interact with the Selenium Server (Selenium RC, Selenium Remote WebDriver) or create local Selenium WebDriver scripts, you need to make use of language-specific client drivers. C# NuGet Selenium IDE SeLite

Web Testing with Selenium Sushi: A Practical Guide and Toolset How does one test the user-interface of a web application? Too often, the answer seems to be 'clumsily, slowly, and not very well'. The technology of automated, repeatable, testing of websites is still developing, but it exists; and Michael Sorens is here to describe an even better approach based on Selenium Contents Some testing categories, such as unit testing, are well-supported by tools. Broadly speaking, applications with a graphical user interface fall into two types: client applications, those that run on a user’s computer, and web applications, those that run on a remote server and are accessed with a client browser. I measure goodness in a software package by using a simple yardstick against the three aspects, features, documentation, and support. Record and playback actions (primarily typing and mouse clicks). That short but powerful list of features is one of the main reasons I became enamored with this free product. Any software package, however, has defined boundaries. try

Angling to develop for Google Glass? Google gives some insight If you’re looking for a taste of what it will be like to develop for Google Glass, the company posted a video demonstrating the hardware and a little bit of the API on Thursday. Timothy Jordan, a senior developer advocate at Google, gave a talk at SXSW in early March that lasted just shy of an hour and gave a look into the platform. Google Glass bears more similarity to the Web than the Android mobile operating system, so developing for it is simpler than creating an Android application. During the talk, Jordan goes over some the functionality developers can get out of the Mirror API, which allows apps to pop Timeline Cards into a user’s view, as well as show new items from services the user might be subscribed to (weather, wire services, and so forth). Jordan also shows how users can interact with items that crop up using the API.

Home - Selenium Learning Assembly Language, Part 2: Little Man Computer Last time we discussed the CARDIAC assembly language. We did everything by hand. It was also incredibly limited. This time, we will introduce a more comprehensive assembly language which is also done completely by hand. The architecture is known as the "Little Man Computer", it too is in decimal (base-10). The little man computer is a model designed to assist in the understanding of the fetch/execute cycle, through the visualization of elements of the computer architecture that would normally remain hidden. The story is the suppose we have a "little man" trapped in a room with 100 mailboxes. We also have two mailboxes at the other end labelled INBOX and OUTBOX which are used for receiving and outputting data to the outside world. In the center of the room, there is a work area containing a simple two function (addition and subtraction) calculator known as the Accumulator and a reset-able counter known as the Program Counter. Architecture Specifications Mnemonics Labels We can do more! Exercises

Selenium WebDriver — Selenium Documentation NOTE: We’re currently working on documenting these sections. We believe the information here is accurate, however be aware we are also still working on this chapter. Additional information will be provided as we go which should make this chapter more solid. Introducing WebDriver The primary new feature in Selenium 2.0 is the integration of the WebDriver API. WebDriver is designed to provide a simpler, more concise programming interface in addition to addressing some limitations in the Selenium-RC API. How Does WebDriver ‘Drive’ the Browser Compared to Selenium-RC? Selenium-WebDriver makes direct calls to the browser using each browser’s native support for automation. For those familiar with Selenium-RC, this is quite different from what you are used to. WebDriver and the Selenium-Server You may, or may not, need the Selenium Server, depending on how you intend to use Selenium-WebDriver. There are some reasons though to use the Selenium-Server with Selenium-WebDriver. Java <? Python Ruby Perl

Selenium Tutorial Everyone wants to learn Selenium and productively use this test automation tool, but not everyone knows how to begin the journey. I will try to get you on the road to becoming a Selenium guru, starting with the basics and covering all of the core concepts you need to become vigorous in Selenium. I’m aiming Selenium tutorial at complete beginner who desires to learn Selenium from the very beginning, software professional who needs rapidly expand Selenium skills and QA Manager who eager to improve testing and coverage. How did I get started with Selenium? Selenium tutorial and documentation Selenium has a distinct advantage in terms of resources for beginners. Selenium books Selenium documentation is a great tool and it would help a lot, but recently the main resource in our team is Selenium Simplified by Alan Richardson and Selenium Testing Tools: Beginners Guide by David Burns. Getting help with Selenium Conclusion The step for learning Selenium can be summarized as follows