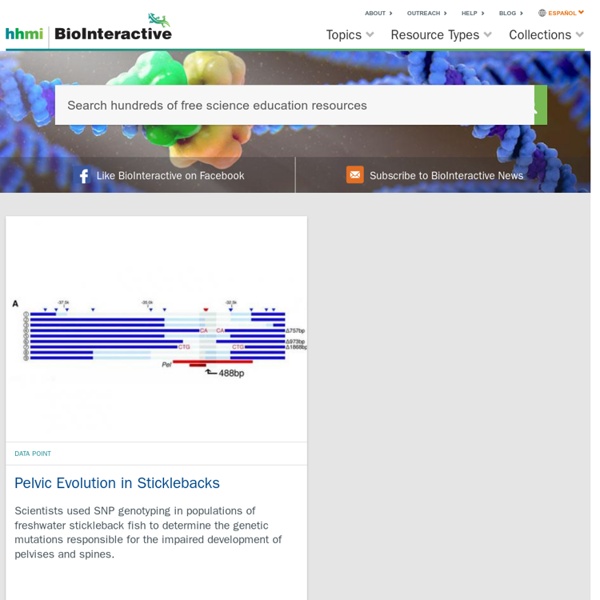 Under the Sea, a Missing Link in the Evolution of Complex Cells Photo Unlike bacteria, humans have big, complex cells, packed with nuclei containing DNA and mitochondria that produce energy. All so-called eukaryotes share our cellular complexity: animals, plants, fungi, even single-celled protozoans like amoebae. Scientists estimate that the first eukaryotes evolved about 2 billion years ago, in one of the greatest transitions in the history of life.

Scientists make huge discovery of ‘cosmic web’ holding our universe together An astonishing new report from scientists shows just what our universe is made of. Scientists have stumbled upon an incredible new discovery that could have tremendous implications for understanding our universe. Using the European Space Agency’s XMM-Newton X-ray observatory, the scientists were able to find three huge filaments of hot gas that was apparently flowing toward a cluster of galaxies, according to a Space Daily report. Galaxies tend to clump together into clusters, creating the largest cosmic structures known in the universe. They are often filled with hot gas and huge quantities of dark matter, invisible to the human eye.

The science of attraction - Dawn Maslar When two people join a dating website, they are matched according to shared interests and how they answer a number of personal questions. But how do sites calculate the likelihood of a successful relationship? Christian Rudder, one of the founders of popular dating site OKCupid, details the algorithm behind 'hitting it off.'Do our smells make us sexy? Popular science suggests yes — pheromones send chemical signals about sex and attraction from our armpits. Venom: The secrets of nature’s deadliest weapon - CSIROscope An array of venomous creatures covered in ‘Venom’. Top left: blue-jeans frog (Daniel Solabarrieta), Top middle: blue-ringed octopus (Noodlefish), Top right: Hammerhead worm (Vengolis), Bottom left: slow loris (Dick Culbert), Bottom middle: blue dragon sea slug (Sylke Rohrlach), Bottom right: platypus (Matt Chan) Venom: The secrets of nature’s deadliest weapon is out now from CSIRO Publishing. To celebrate, we’ve concocted a deliciously toxic blog to get into your system. What’s the first image that strikes you when we say ‘venom’? Thanks to evolution building personal alarm mechanisms over countless generations, it’s likely snakes.

How does caffeine affect the body? Biologist Neal J. Smatresk--Dean of the College of Science at the University of Texas at Arlington--offers this explanation: Caffeine--the drug that gives coffee and cola its kick--has a number of physiological effects. At the cellular level, caffeine blocks the action of a chemical called phosphodiesterase (PDE). Inside cells, PDE normally breaks down the second chemical messenger cyclic adenosine monophosphate (cAMP). Many hormones and neurotransmitters cannot cross the cell membrane, and so they exert their actions indirectly via such second messengers; when they bind to a receptor on the surface of a cell, it initiates a chemical chain reaction called an enzyme cascade that results in the formation of second messenger chemicals.

If You Think Science Is the Enemy, You Don’t Know What Science Is by Lori Chandler People love the benefits of science. They generally like the advances made in technology, biology, psychology, chemistry, and physics. And yet, there seems to be confusion about what science is and how we perceive it, which has led to a strange backlash against pursuing knowledge. In a recent and riveting piece for Aeon, David P.

Teacher Resources - GeneEd - Genetics, Education, Discovery Lesson plans, genetic educational materials, printable activity sheets, and other teaching resources for educators seeking to increase genetic and genomic literacy. Biostatistics Basic Probability and Chi-Squared Tests (Lesson Plans/Lesson Activities) Description: An expert authored advanced in-class exercise teaching critical skills for classic genetic analysis, including probability, making predictions, and assessment Source: Genetics Society of America | URL: More food, cleaner food—gene technology and plants - Nova An Austrian monk named Mendel was the first to understand the basic principles by which genes are transmitted from parents to offspring. He worked this out in the 1860s by studying garden peas and the patterns of how certain characteristics (like seed and flower colour) were passed on through the generations of pea plants. Many scientists in the early 1900s further advanced our knowledge of gene transmission. In the following decades, scientists discovered the molecular nature of genes and their products.

How do you cite website material that has no author, no year, and no page numbers? Because the material does not include page numbers, you can include any of the following in the text to cite the quotation (from pp. 170–171 of the Publication Manual): A paragraph number, if provided; alternatively, you could count paragraphs down from the beginning of the document. An overarching heading plus a paragraph number within that section. A short title in quotation marks, in cases in which the heading is too unwieldy to cite in full. Because there is no date and no author, your text citation would include the title (or short title) "n.d." for no date, and paragraph number (e.g., "Heuristic," n.d., para. 1).

Sandwalk: The Adaptation Assessment Probe I'm taking a MOOC on evolution that's designed for educators [Evolution: A Course for Educators]. One of the things that was covered in the first lecture was a test on "adpatation" taken from a book called "Uncovering Student Ideas in Science, Volume 4: 25 New Formative Assessment Probes. The book is published by the National Science Teachers Association (NSTA). Let's take the test ... Adaptation Three friends were arguing about what would happen if a population of rabbits from a warm, southern climate were moved to a cold, northern climate.1 This is what they said:Bernie: "I think all of the rabbits will try to adapt to the change." This Telescope Could See Back to the Beginning of Time by 2022 by Natalie Shoemaker We may be able to see the dawn of the universe by 2022. Construction on the next generation of super-massive telescopes has begun with the Giant Magellan Telescope (GMT). Last week, the crew broke ground on an Andean mountaintop in Chile — the site of the GMT. Completion could be as early as 2022, and with it will come a deeper understanding of the universe. "Astronomy is like archeology; what we see in the sky happened many years ago.