What really happened during the Salem Witch Trials - Brian A. Pavlac. Ken Burns in the Classroom. Experiencing Early American History with Interactive Resources. Thanksgiving, despite not becoming a national holiday until the Civil War, is a time of year steeped in images of America’s colonial past. 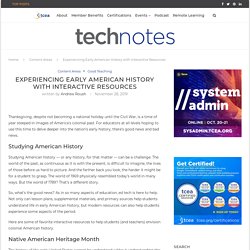 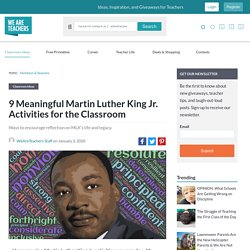 Read and share books that showcase King’s beliefs Martin Luther King Jr.’s message wasn’t exclusively about race. He also spoke about gender stereotypes, poverty, and privilege. Read books about black Americans who were trailblazers. 2. Teaching Tolerance has a great program called Mix It Up at Lunch Day that helps kids step out of their comfort zone and interact with people who are different from them.

The Gilder Lehrman Institute of American History. Connecting the Dots: Why a History Degree is Useful in the Business World. Credit: Bob Weidner Most faculty members have heard cynical parents making arguments like, “My kid should go for a straight business degree. 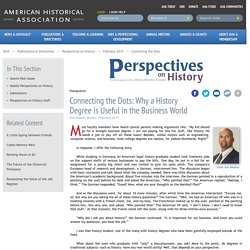 I am not paying for this fun stuff, like history. He needs a job to pay off all these loans! Besides, unlike majors such as engineering, computer science, and business, most college degrees are useless, for jobless blowhards. Right?” In response, I offer the following story. While studying in Germany, an American legal history graduate student took freelance jobs on the support staffs of various businesses to pay the bills. And so the discussion went, for about 10 more minutes, after which time the American interjected: “Excuse me, sir, but why are you asking me all of these history questions?” “Why did I ask you about history?” Six Teaching Tools for Black History Month. Black History Month provides a great opportunity for students to explore and learn more about a variety of issues. 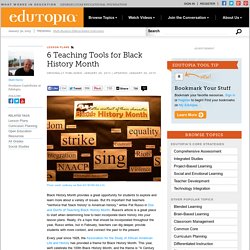 But it's important that teachers "reinforce that 'black history' is American history," writes Pat Russo in Dos and Don'ts of Teaching Black History Month. Russo's article is a great place to start when determining how to best incorporate black history into your lesson plans. Really, it's a topic that should be incorporated throughout the year, Russo writes, but in February, teachers can dig deeper, provide students with more context, and connect the past to the present.

A digital reimagining of Gettysburg - Anne Knowles. Memorial Day is a US federal holiday wherein the men and women who died while serving in the United States Armed Forces are remembered.The holiday, which is celebrated every year on the final Monday of May, was formerly known as Decoration Day and originated after the American Civil War to commemorate the Union and Confederate soldiers who died in the Civil War. 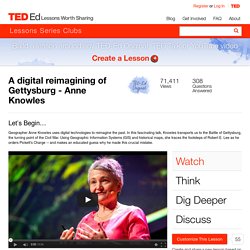 By the 20th century, Memorial Day had been extended to honor all Americans who have died while in the military service. American History: "Growth of a Nation" 7 Elections that Changed U.S. History. "Presidential" tie 1800 - President vs. 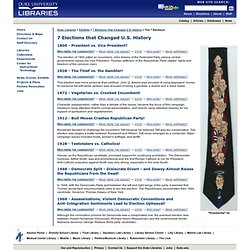 Vice President? The College Majors Of U.S. Presidents (And Other Trivia) How Online Education Has Changed In 10 Years 4.67K Views 0 Likes We all know that education, specifically online education, has come a long way in the last few years. Visualizing Emancipation. A Biography of America. The Best Sites For Learning About Pearl Harbor. With Pearl Harbor Remembrance Day coming up tomorrow, December 7th, I thought I’d put together a quick “The Best…” list of useful resources. 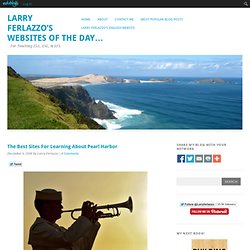 I know it’s a bit late, but at least you can use it for planning next year. Here are my picks, not in order of preference, of The Best Sites For Learning About Pearl Harbor (and that are accessible to English Language Learners): EL Civics has A Pearl Harbor Day Lesson, including online resources and reproducible hand-outs. Holt, Rinehart & Winston have a Pearl Harbor Interactive. Colonial Life in Early America.

Abraham Lincoln Assassination and Memorial Links. The Trial of the Lincoln Assassination Conspirators. The Learning Network - The Learning Network Blog - NYTimes.com. The American Revolution - (Home) History Matters: The U.S. Survey Course on the Web. Annenberg Media - A Biography of America. The Black Inventor Online Museum - a Look at Black Inventors and their Contributions to Society. The American Revolution and Its Era: Maps and Charts of North America and the West Indies, 1750-1789. 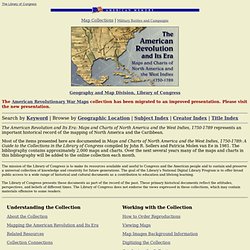 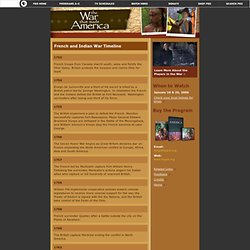 Britain protests the invasion and claims Ohio for itself. Ensign de Jumonville and a third of his escort is killed by a British patrol led by George Washington.