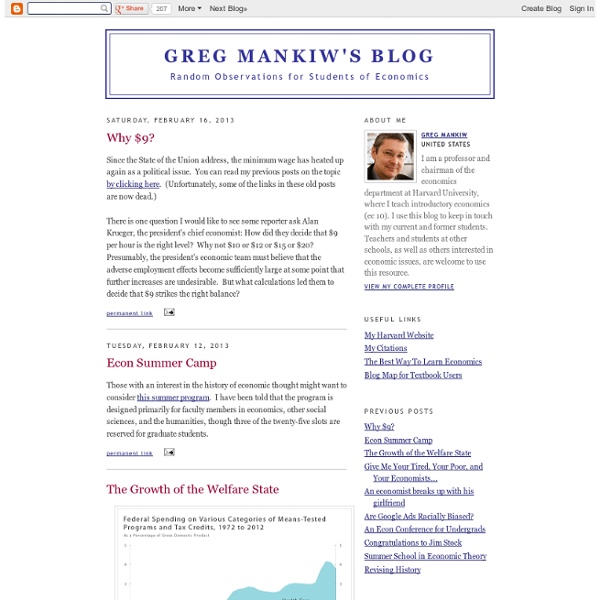 Over the past few decades, there has been an amazing shift in how businesses are taxed. See the figure below, which is from CBO. Businesses are more and more taxed as pass-through entities, where the income shows up on personal tax returns rather than on corporate returns. (Here is an article discussing how the mutual giant Fidelity recently switched from one form to the other.) This phenomenon complicates the interpretation of tax return data. For example, when one looks at the growth of the 1 percent, or the 0.1 percent, in the Piketty-Saez data, that growth is likely exaggerated because some income is merely being shifted from corporate returns.

Iraq: new alliances, old repression Iraq's main political actors are engaged in intense political jockeying in advance of the country's parliamentary elections scheduled for January 2010. The formation of the al-Ittilaf al-Watani al-Iraqi (Iraqi National Alliance), announced on 23 August 2009, is part of a long process of political realignment among Iraq's old political parties that may have a big impact on the election result. But whatever the outcome of this process, which has been fraught with volatility, many Iraqis fear that the political manoeuvring will do little to improve their lives - and that violence will again displace politics as a means of setting the country's course.

Rational Irrationality April 14, 2014 Eight Hopeful Legacies of the Arab Spring More than three years after the Arab Spring began, the political situation in the Middle East is depressing. In Syria, a brutal civil war continues, with the forces of Bashar al-Assad gaining the upper hand. In Egypt, General Abdel Fattah el-Sisi, who has overseen a drastic crackdown on political opponents, looks likely to be elected as President.

Foul trouble « The Leisure of the Theory Class [Update 5/17: Thank you for the many interesting comments! Please see my follow-up posted today.] In a professional basketball game, a player is disqualified (“fouls out”) if he is charged with 6 personal fouls. Observers of the NBA know that the direct effect of fouling out actually has less impact than the indirect effect of “foul trouble.” That is, if a player has a dangerous number of fouls, the coach will voluntarily bench him for part of the game, to lessen the chance of fouling out. Coaches seem to roughly use the rule of thumb that a player with n fouls should sit until n/6 of the game has passed.

Real Time Economics China’s GDP growth fell in the first quarter to its slowest pace since September of 2012, slipping to 7.4% on-year growth from 7.7% the in the fourth quarter. The increase was slightly higher than economists’ expectations of a 7.3% gain. Authorities released other data that suggested continuing weakness, but not at a quickening pace. Industrial production grew 8.8% on year in March below expectations of 9% but up from an average 8.6% expansion in January and February, combined to limit distortions from the Lunar New Year holidays. Retail sales were 12.2% higher on-year in March, up from 11.8% growth in January and February. Fixed-asset investment, meanwhile, slipped to 17.6% on year in the first quarter from 17.9% growth in the first two months.

mental_floss Blog » Fun with Venn and Euler Diagrams A Venn diagram is a mathematical illustration that shows all of the possible mathematical or logical relationships between sets. A Euler diagram resembles a Venn diagram, but does not neccessarily show all possible intersections of the sets. A Euler diagram is often more useful for showing real world data, because not all sets partially overlap with all other sets. I used the 3 Circle Venn Diagram Applet to make a diagram of food preferences in my family. I have one child who won't eat much in the way of meat or vegetables, and another who dislikes carbs. The Palgrave Econolog - Zeitgeist Rankings are based on the number of incoming links from other indexed economics blogs and some secret Econolog sauce. Only links from the past ninety days are counted. Readability Readability is assessed for posts published in the past ninety days using the Gunning-Fog index. The index is an indication of the number of years of formal education that a person requires in order to easily understand the text on the first reading. You can see more readability stats by clicking through to individual blogs and checking out the sidebar.

Economists' Forum Global economic recovery stuck below takeoff speed By Eswar Prasad and Karim Foda The global economic recovery remains stuck below takeoff speed, unable to achieve liftoff and facing the risk of stalling. Poverty and Financial Distress Would Have Been Substantially Worse in 2010 Without Government Action, New Census Data Show Six temporary federal initiatives enacted in 2009 and 2010 to bolster the economy by lifting consumers’ incomes and purchases kept nearly 7 million Americans out of poverty in 2010, under an alternative measure of poverty that takes into account the impact of government benefit programs and taxes. These initiatives — three new or expanded tax credits, two enhancements of unemployment insurance, and an expansion of benefits through the Supplemental Nutrition Assistance Program (SNAP, formerly called food stamps) — were part of the 2009 Recovery Act. Congress subsequently extended or expanded some of them. To gauge the impacts of these initiatives on poverty, analysts cannot use the official poverty measure because it counts only cash income and does not take refundable tax credits, SNAP benefits, and other non-cash assistance into account. Expansions in the Earned Income Tax Credit (EITC) and Child Tax Credit (CTC) kept 1.6 million people out of poverty. The Center's Analysis

MBA Books - Good books to read prior to MBA [Merged] : Business School Life i'm looking forward to all the time i'll have back once apps are over. i wanted to find out the must reads prior to entering b-school. nytimes had a great article a while back about ceo libraries and what they reveal about the leader. ... aries.html here's an excerptForget finding the business best-seller list in these libraries. “I try to vary my reading diet and ensure that I read more fiction than nonfiction,” Mr.