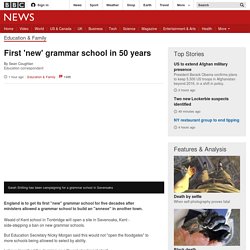 Weald of Kent school in Tonbridge will open a site in Sevenoaks, Kent - side-stepping a ban on new grammar schools. But Education Secretary Nicky Morgan said this would not "open the floodgates" to more schools being allowed to select by ability. Labour described the decision as a "hugely backward step". The decision to allow the new grammar school site, with places for 450 girls, has raised expectations of similar bids in other parts of the country.

But Mrs Morgan said this was a "genuine expansion" of an existing school - describing it as "one school, two sites" - and it "does not reflect a change in this government's position on selective schools". The education secretary said that the ban on new grammars would remain. "I don't want to fight the battles of selective and non-selective... 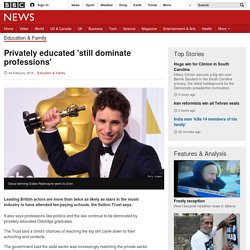 It also says professions like politics and the law continue to be dominated by privately educated Oxbridge graduates. The Trust said a child's chances of reaching the top still came down to their schooling and contacts. The government said the state sector was increasingly matching the private sector in terms of academic attainment.

Researchers for the Trust, which campaigns for greater social mobility, looked at the educational backgrounds of more than 1,200 people, working in high positions in medicine, the law, the military, journalism, politics, the civil service, business, film and pop music. They also looked at Nobel Prize-winners. Image copyright Reuters Elite backgrounds Among top military personnel, some seven in 10 (71%) were educated in the private sector, although just 14% were Oxbridge educated. Social networks. 2.2 When the lights went out h/w. 2.2 Miners' strike turns off the lights h/w. 1972: Miners' strike turns off the lights Many homes and businesses will be without electricity for up to nine hours a day from today, the Central Electricity Generating Board has announced. 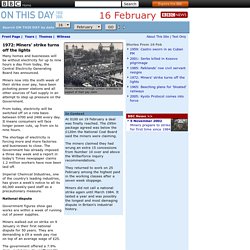 Miners now into the sixth week of their strike over pay, have been picketing power stations and all other sources of fuel supply in an attempt to step up pressure on the Government. From today, electricity will be switched off on a rota basis between 0700 and 2400 every day. It means consumers will face longer power cuts, up from six to nine hours. The shortage of electricity is forcing more and more factories and businesses to close. Imperial Chemical Industries, one of the country's leading industries, has given a week's notice to all its 60,000 weekly-paid staff as a precautionary measure. National dispute Government figures show gas works are within a week of running out of power supplies. 2.2 1974: The miners' strike comes to an end. 1974: Miners' strike comes to an end British coal workers have called off a four-week strike following a 35% pay offer from the new Labour government in what is being seen as a resounding victory for the miners. 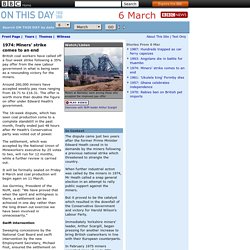 Around 260,000 miners have accepted weekly pay rises ranging from £6.71 to £16.31. The offer is worth more than double the figure on offer under Edward Heath's government. The 16-week dispute, which has seen coal production come to a complete standstill in the past month, finally ended just 48 hours after Mr Heath's Conservative party was voted out of power.

The settlement, which was accepted by the National Union of Mineworkers executive by 25 votes to two, will run for 12 months, while a further review is carried out. It will be formally sealed on Friday 8 March and coal production will begin again on 11 March. Swift intervention The NCB's original offer of £45 million a year for the miners was at first doubled to £90m. 2.2 Winter of Discontent 1979: Public sector strike paralyses country. 1979: Public sector strike paralyses country Tens of thousands of public sector workers have taken part in a day of action - the biggest mass stoppage since 1926 - in support of a claim for more pay. 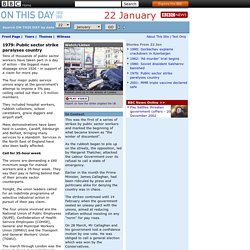 The four major public service unions angry at the government's attempt to impose a 5% pay ceiling called out their 1.5 million members. They included hospital workers, rubbish collectors, school caretakers, grave diggers and airport staff. Mass demonstrations have been held in London, Cardiff, Edinburgh and Belfast, bringing many services to a standstill. Services in the North East of England have also been badly affected. Call for 35-hour week. 2.2 6 minute long overview of Britain 1974-1979.