How Assertive Should You Be? The Answers Will Surprise You. Google the phrase “assertiveness training” and over 700,000 possibilities will pop up. Thanks to Sheryl Sandberg, “lean in” is the new mantra for women—and judging from the search options, it appears that every second person is either worrying about being a doormat, or working as a life coach. We take it as truth that how assertive or unassertive we are affects every aspect of our lives, including work and relationships. Culturally, we link assertiveness to success, leadership, and getting ahead, but still, there’s ambivalence: Look up “assertive” in the dictionary and you’ll see its synonym is “aggressive.”

The Pros and Cons of Being Pushy It’s true that there are plenty of pushovers out there. But most of us have also seen firsthand what assertiveness run amok can do to collaboration or teamwork; a relationship or marriage; the atmosphere in a classroom, office, or dinner party; or any give-and-take or negotiation. So, what’s the deal? Do very assertive people make better leaders? Ames. Why We Fall for Narcissists. Elena Sikorskaya/Shutterstock Most of us will, at one point or another, find ourselves reflecting on or recovering from a romantic run-in with a narcissist. 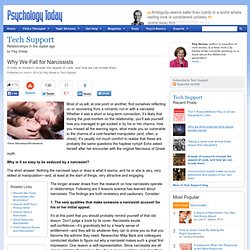 Whether it was a short or long-term connection, it’s likely that during the post-mortem on the relationship, you'll ask yourself how you managed to get sucked in by his or her charms, how you missed all the warning signs, what made you so vulnerable to the charms of a cold-hearted manipulator (and, often, a cheat). It’s usually not much comfort to realize that these are probably the same questions the hapless nymph Echo asked herself after her encounter with the original Narcissus of Greek myth.

The Secret To Dealing With Passive-Aggressive People. Ah, passive aggression. 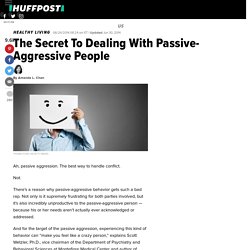 The best way to handle conflict. Not. There’s a reason why passive-aggressive behavior gets such a bad rap. Not only is it supremely frustrating for both parties involved, but it’s also incredibly unproductive to the passive-aggressive person — because his or her needs aren’t actually ever acknowledged or addressed. And for the target of the passive aggression, experiencing this kind of behavior can “make you feel like a crazy person,” explains Scott Wetzler, Ph.D., vice chairman of the Department of Psychiatry and Behavioral Sciences at Montefiore Medical Center and author of Living With the Passive-Aggressive Man. Hold Me Tight. We have a wired-in need for emotional contact and responsiveness from significant others.

It's a survival response, the driving force of the bond of security a baby seeks with its mother. This observation is at the heart of attachment theory. A great deal of evidence indicates that the need for secure attachment never disappears; it evolves into the adult need for a secure emotional bond with a partner. Think of how a mother lovingly gazes at her baby, just as two lovers stare into each other's eyes.

Although our culture has framed dependency as a bad thing, a weakness, it is not. The most basic tenet of attachment theory is that isolation—not just physical isolation but emotional isolation—is traumatizing for human beings. The drama of love that I saw played out at the bar each night as a child is all about the human hunger for safe emotional connection, a survival imperative we experience from the cradle to the grave. Broken Connections Consider a couple with their firstborn child. 7 Things You Need to Learn About Your Temper. "Stop crying this instant! 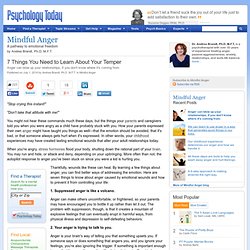 " "Don't take that attitude with me! " You might not hear these commands much these days, but the things your parents and caregivers told you when you were angry as a child have probably stuck with you. How your parents expressed their own anger might have taught you things as well—that the emotion should be avoided, that it's bad, or that someone always gets hurt when it's expressed. In other words, your childhood experiences may have created lasting emotional wounds that alter your adult relationships today. How Assertive Should You Be? The Answers Will Surprise You. How to Stop Getting Bullied. People who are willing to use sarcasm, yelling, name-calling, threats, intimidation, withdrawal of love, and even physical attacks on you when you won’t do, think, or feel what they want are bullies. 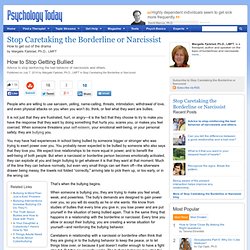 It is not just that they are frustrated, hurt, or angry—it is the fact that they choose to try to make you have the response that they want by doing something that hurts you, scares you, or makes you feel coerced. When someone threatens your self-esteem, your emotional well-being, or your personal safety, they are bullying you. You may have had experiences in school being bullied by someone bigger or stronger who was trying to exert power over you.

You probably never expected to be bullied by someone who also says that they love you. We expect love relationships to be more equal in power, and to benefit the well-being of both people. How to Stop Getting Bullied. Name Calling, Insults and Teasing. For the past few weeks, I have been discussing the different reasons why people criticize and how to respond in a mature manner. 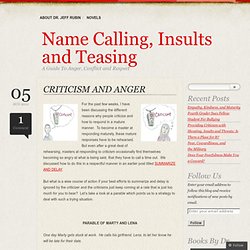 To become a master at responding maturely, these mature responses have to be rehearsed. But even after a great deal of rehearsing, masters at responding to criticism occasionally find themselves becoming so angry at what is being said, that they have to call a time out. We discussed how to do this in a respectful manner in an earlier post titled SUMMARIZE AND DELAY. But what is a wise course of action if your best efforts to summarize and delay is ignored by the criticizer and the criticisms just keep coming at a rate that is just too much for you to bear? The One Emotion That Really Hurts Your Brain. Being told you’re wrong when you are may make you a more knowledgeable a person but not necessarily a happier one. 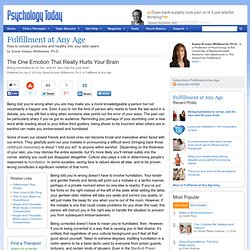 Even if you’re not the kind of person who needs to have the last word in a debate, you may still feel a sting when someone else points out the error of your ways. The pain can be particularly sharp if you’ve got an audience. Reminding you perhaps of your stumbling over a new word while reading aloud to your fellow third graders, being shown to be incorrect when others are in earshot can make you embarrassed and humiliated. Some of even our closest friends and loved ones can become brutal and insensitive when faced with our errors. 8 Ways to Protect Yourself From Emotional Manipulation. Here are 8 ways to spot emotional manipulation and how to protect yourself from it: 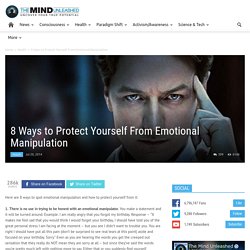 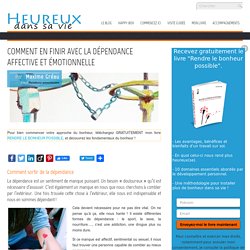 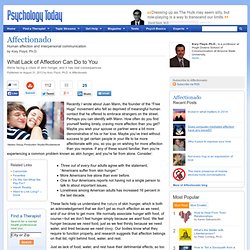 Hold Me Tight. Cuddling Is So Important, It May Be Worth Paying For. Robert Kneschke/Shutterstock I’ve been laid up for the past several weeks with a horrible case of pneumonia. My friends, pitying my bedridden state, have brought me all sorts of non-academic reading material to help while away the hours. This weekend I finally reached the last magazine in the stack. Why It's So Hard to Live With Narcissists. Auremar/Shutterstock We know that the personality traits associated with narcissism can make life for their partners extremely difficult. People high in narcissism can be entitled, demanding, and egocentric. They’re also likely to shirk their duties, believing that everyday chores are beneath their dignity. What to Do When You Feel Rejected. Warner Heiber Sara*, a married woman in her 40s, goes to bed every night feeling rejected by her husband.

"He never initiates sex, he never puts his arms around me," she told me in our first session. "When I reach out to him he's always tired and not in the mood. It feels awful. " People in stable, long-term relationships and marriages often feel rejected by their partner at some time or another. Rejections Involving Intimacy and Sex While the bathroom and kitchen may be the most "dangerous" rooms in the house in terms of physical injury, most of our emotional injuries happen in the bedroom. The Benjamin Franklin Effect: The Surprising Psychology of How to Handle Haters.

“We are what we pretend to be,” Kurt Vonnegut famously wrote, “so we must be careful about what we pretend to be.” But given how much our minds mislead us, what if we don’t realize when we’re pretending — who are we then? That’s precisely what David McRaney explores in You Are Now Less Dumb: How to Conquer Mob Mentality, How to Buy Happiness, and All the Other Ways to Outsmart Yourself (public library) — a “book about self-delusion, but also a celebration of it,” a fascinating and pleasantly uncomfortable-making look at why “self-delusion is as much a part of the human condition as fingers and toes,” and the follow-up to McRaney’s You Are Not So Smart, one of the best psychology books of 2011. McRaney, with his signature fusion of intelligent irreverence and irreverent intelligence, writes in the introduction: The human mind is obviously vaster and more powerful than any other animal mind, and that’s something people throughout all human history couldn’t help but notice.