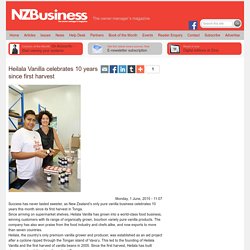 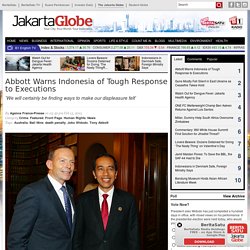 (Reuters Photo/G20 Australia) Sydney. Millions of Australians are “sickened” by the imminent execution of two of its citizens by Indonesia, Prime Minister Tony Abbott said on Sunday, warning of a tough diplomatic response. Australia PM pleads with Indonesia over death row men. Prime Minister Tony Abbott on Saturday pleaded with Indonesia to heed Australia's call for clemency for two death row convicts, and warned that Canberra would make its displeasure known should the executions go ahead. 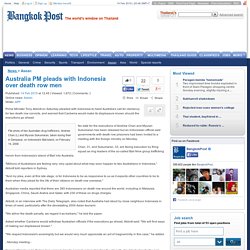 Un succès made in France en Indonésie. Jokowi launches maritime doctrine to the world. Before world leaders attending the East Asia summit on Thursday, President Joko “Jokowi” Widodo announced the much-awaited vision of his signature maritime-axis doctrine that will define his administration for the next five years. 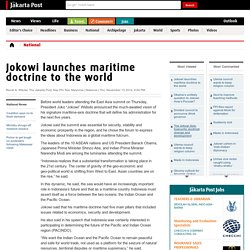 Jokowi said the summit was essential for security, stability and economic prosperity in the region, and he chose the forum to express the ideas about Indonesia as a global maritime fulcrum. The leaders of the 10 ASEAN nations and US President Barack Obama, Japanese Prime Minister Shinzo Abe, and Indian Prime Minister Narendra Modi are among the luminaries attending the summit. “Indonesia realizes that a substantial transformation is taking place in the 21st century. The center of gravity of the geo-economic and geo-political world is shifting from West to East. Asian countries are on the rise,” he said. Jokowi said that his maritime doctrine had five main pillars that included issues related to economics, security and development. 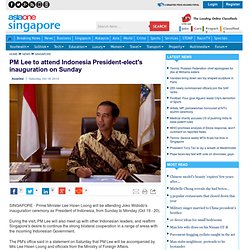 During the visit, PM Lee will also meet up with other Indonesian leaders, and reaffirm Singapore's desire to continue the strong bilateral cooperation in a range of areas with the incoming Indonesian Government. The PM's office said in a statement on Saturday that PM Lee will be accompanied by Mrs Lee Hsien Loong and officials from the Ministry of Foreign Affairs. During his absence, Deputy Prime Minister Mr Teo Chee Hean will be the Acting Prime Minister. grongloh@sph.com.sg. SBY thanks McCain for US support to modernize RI military. RI-US relation: Prsident Susilo Bambang Yudhoyono welcomes visiting Senator John McCain at the Presidential Office in Jakarta on Tuesday. 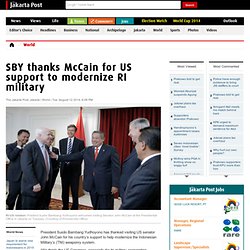 (Courtesy of Presidential Office) President Susilo Bambang Yudhoyono has thanked visiting US senator John McCain for his country’s support to help modernize the Indonesian Military’s (TNI) weaponry system. “We thank the US Congress, especially for its military cooperation, including in modernizing our military weaponry system,” Yudhoyono said as he welcomed McCain to the Presidential Palace in Jakarta on Tuesday, as quoted by Antara news agency. Yudhoyono said that Indonesia’s military weapons had not been sufficiently modernized for almost 20 years. With stronger defense cooperation, he added, it was hoped that Indonesia and the US could work more closely to help create a more stable and peaceful Asian region. Indonesian Government Officially Bans ISIS. The coordinating minister for political, legal and security affairs, Djoko Suyanto, center, said on Monday that there is no place for ISIS in Indonesia. 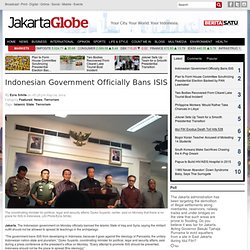 (JG Photo/Ezra Sihite) Jakarta. The Indonesian government on Monday officially banned the Islamic State of Iraq and Syria, saying the militant outfit should not be allowed to spread its teachings in the archipelago. “The government bans ISIS from developing in Indonesia, because it goes against the ideology of Pancasila, the unitary Indonesian nation-state and pluralism,” Djoko Suyanto, coordinating minister for political, legal and security affairs, said during a press conference at the president’s office on Monday. Indonesia responds to reports of Australian phone tapping by setting up central intelligence committee.

Indonesian Foreign Minister Marty Natalegawa Photo: Andrew Meares Indonesia has moved to strengthen its intelligence apparatus in response to revelations that Australia tapped the phone of its President. 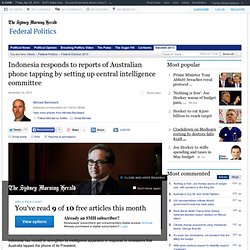 As the fallout over the spy row continues to widen, Indonesian Foreign Minister Marty Natalegawa confirmed that all co-operation on people smuggling - from police information sharing to search and rescue - had now halted. Diplomatic fallout from the latest Snowden revelations. The Guardian and the ABC have released information from Edward Snowden alleging that the Australian Defence Signals Directorate (DSD, now the Australian Signals Directorate) targeted the mobile phones of a number of senior Indonesian officials — including President Susilo Bambang Yudhoyono — in 2009. This will no doubt cause a diplomatic storm, and already Teuku Faizasyah, a senior spokesperson for President Susilo Bambang Yudhoyono, has told the ABC that the 'Australian Government urgently needs to clarify this news, to avoid further damage.' A tweet from Australian journalist Ben Packham notes that 'turning the boats around just got a lot harder.' 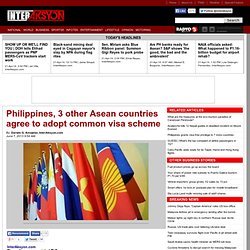 During the 22nd World Economic Forum (WEF) on East Asia, ministers and tourism authorities of the four Asean member-states said they will facilitate travel in the region by developing a common smart visa system. Indonesia blames eight firms for fires affecting region. RI and PNG plan joint exploration in border areas. Indonesia has agreed to team up with neighboring Papua New Guinea (PNG) to explore potential oil and gas reserves in border areas as the former shifts its oil and gas exploration focus to the eastern part of the archipelago. 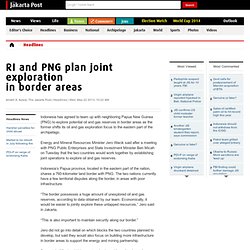 Energy and Mineral Resources Minister Jero Wacik said after a meeting with PNG Public Enterprises and State Investment Minister Ben Micah on Tuesday that the two countries would work together by establishing joint operations to explore oil and gas reserves. Indonesia’s Papua province, located in the eastern part of the nation, shares a 760-kilometer land border with PNG. The two nations currently have a few territorial disputes along the border, in areas with poor infrastructure. “The border possesses a huge amount of unexplored oil and gas reserves, according to data obtained by our team. Indonesia says 2 arrested for Myanmar Embassy plot - Yahoo! News - Pale Moon. JAKARTA, Indonesia (AP) — Hours after Indonesia announced it had foiled an alleged plot to bomb the Myanmar Embassy in Jakarta, hundreds of hard-line Muslims gathered outside the mission Friday calling for jihad in that country to fight against persecution of their Islamic brothers.

By Indonesia correspondent George Roberts Updated Fri 3 May 2013, 8:54am AEST Indonesian president Susilo Bambang Yudhoyono says his country should strive to have a more powerful military than Australia. About 16,000 Indonesian troops are preparing for joint military exercises in East Java. Meeting with military commanders, Mr Yudhoyono told them that Indonesia's military should be bigger and more modern than countries like Australia, Singapore and Malaysia. Indonesia's military boasts 470,000 active troops, while the Australian Defence Force has just over 80,000 full-time personnel and reservists.. It has also embarked on a military upgrade program, building warships and drones, as well buying fighter jets, helicopters and rockets. Topics: world-politics, defence-and-national-security, indonesia, australia.

2013-05-04 Vanautu prime minister promises backing for Papuan membership of MSG - Pale Moon. Updated at 3:57 pm on 5 April 2013. Dino Patti Djalal. Indonesia’s Submarine Play. Dutch Apologize for Indonesian Massacre. The Netherlands has formally apologized to the families of those killed in a 1947 massacre by Dutch troops on Indonesia's Java Island. Activists say the landmark move sets an important precedent, but also highlights the hypocrisy of the Indonesian government in dealing with human rights abuses committed at home.

The Dutch ambassador to Indonesia, Tjeerd de Zwan, issued the official apology Friday in the village of Rawagede, where Dutch troops rounded up and executed up to 430 men in 1947, during Indonesia's bitter struggle for independence. The Dutch government has never prosecuted any soldiers for the massacre, despite a United Nations report condemning the attack as "deliberate and ruthless" that was issued as early as 1948. While no individuals have been charged, a court in The Hague ruled in September that the Dutch government should pay compensation of $27,000 to nine of the victims’ families. 9/11 attacks bring US, RI closer. No more violence: In this file photo, members of Hizbut Tahir Indonesia stage a protest against the US’ plan to invade Iraq in March 2003.

Indonesia to file strong protest to Saudi Arabia against maid execution. Great, But Unfocused: Indonesian Assessments of U.S. Power. Part of Capacity and Resolve: Foreign Assessments of U.S. Power Indonesians, like citizens of other Southeast Asian nations, perceive American power to be in decline relative to a rising China, yet they generally believe the United States will retain its role as the world’s preeminent power for the next several decades. More salient are Indonesian concerns about U.S. engagement—that is, that the U.S. focus on Southeast Asia is inconsistent, whether the United States is powerful or not.

Indonesia rules out asylum seeker deal. INDONESIAN Foreign Minister Marty Natalegawa has dismissed the possibility of his country entering into a swap agreement on asylum seekers with Australia. WikiLeaks rift between US and Indonesia worsens as talks called off. US President Barack Obama ... his call to his Indonesian counterpart, Susilo Bambang Yudhoyono, was scuttled. Aquino to leave for Indonesia Monday night. Experts, Indonesia agree: Let Timor Leste join ASEAN. Serbia ‘reconfirms’ Indonesia’s stance on Kosovo. Serbia and Indonesia are stepping up to the next level of bilateral relations with the three-day visit of a Serbian delegation to Jakarta. Peacekeeping, ASEAN-style. Indonesia, the current chair of ASEAN, confirms that it's sending observers to the disputed area between Thailand and Cambodia. But Indonesia's foreign minister wants to be clear: this is not a peacekeeping force.