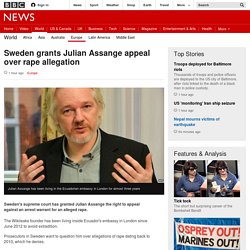 The Wikileaks founder has been living inside Ecuador's embassy in London since June 2012 to avoid extradition. Prosecutors in Sweden want to question him over allegations of rape dating back to 2010, which he denies. Mr Assange claims extradition to Sweden would allow the US to charge him over leaks of classified documents.

A previous appeal by Mr Assange was dismissed by Sweden's appeals court in November last year, but the supreme court has now awarded him the right to appeal. The announcement follows a surprise reversal by Swedish prosecutors, who last month agreed to travel to London to question Mr Assange after insisting for years he must travel to Sweden.

10 things about extradition. 26 June 2013Last updated at 19:29 ET By Kathryn Westcott and Vanessa Barford BBC News The Edward Snowden affair shows how complicated the international web of extradition treaties is. 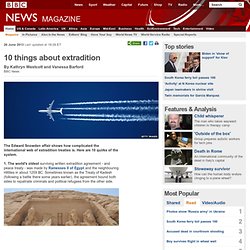 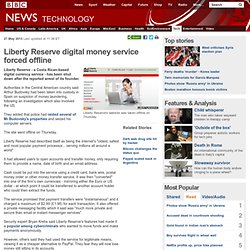 Copyright Owners Can't Sue YouTube As A Group, Judge Rules. Copyright holders are not allowed to sue YouTube as a group. (ERIC PIERMONT/AFP/Getty Images) NEW YORK (Reuters) - A U.S. judge on Thursday denied class-action status to copyright owners suing Google Inc over the use of material posted on YouTube without their permission. U.S. 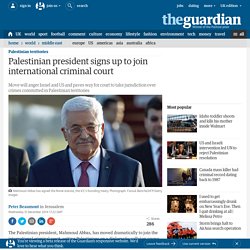 Abbas signed the Rome treaty governing the court and 19 other international agreements on Wednesday evening following the rejection by the UN security council of a Jordanian-backed resolution calling for the end of the Israeli occupation by 2017. A Point Of View: Bitcoin's freedom promise. 26 April 2013Last updated at 12:47 ET. 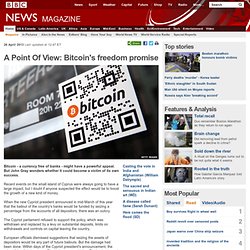 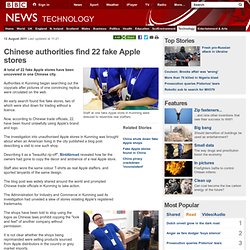 A total of 22 fake Apple stores have been uncovered in one Chinese city. Authorities in Kunming began searching out the copycats after pictures of one convincing replica were circulated on the web. An early search found five fake stores, two of which were shut down for trading without a licence. Now, according to Chinese trade officials, 22 have been found unlawfully using Apple's brand and logo. The investigation into unauthorised Apple stores in Kunming was brought about when an American living in the city published a blog post describing a visit to one such shop. Cyprus bailout: Feeling unloved in Germany. 31 March 2013Last updated at 23:24 ET By Stephen Evans BBC News, Berlin. 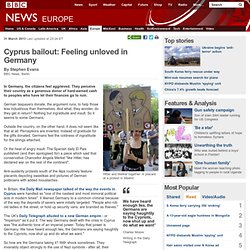 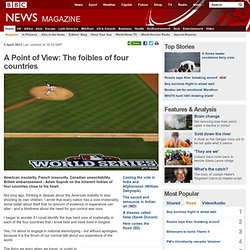 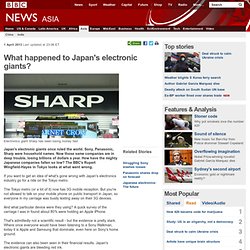 Sony, Panasonic, Sharp were household names. Now those same companies are in deep trouble, losing billions of dollars a year. How have the mighty Japanese companies fallen so low? UN passes historic arms trade treaty by huge majority. 2 April 2013Last updated at 16:04 ET Activists put a replica of a military helicopter on a roof near the UN in New York The UN General Assembly has adopted a historic treaty to control the trade in conventional arms, voting it through by a huge majority. 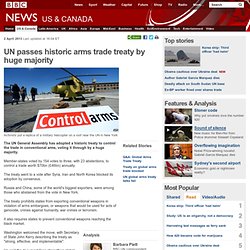 Germany Drops 63-Letter Word Rindfleischetikettierungsüberwachungsaufgabenübertragungsgesetz. Germany has dropped a 63-letter word which refers to the “law for the delegation of monitoring beef labelling”. Rindfleischetikettierungsüberwachungsaufgabenübertragungsgesetz was repealed by a regional parliament, The Telegraph reports, after the EU lifted a recommendation to carry out BSE tests on healthy cattle. Icann launches brand database for trademarks. 26 March 2013Last updated at 10:09 ET Firms are concerned that new web addresses will damage their brands Net address regulator Icann has launched a database to allow businesses to register their brands, ahead of the release of a raft of new domain names. It is hoped the Trade Mark Clearing House (TMCH) will mitigate concerns about cyber-squatting and trademark infringement.

Nearly 2,000 new suffixes, known as generic top-level domains (gTLD), will be introduced later this year. Pirate's Paradise: U.S. Investors Will Further Devastate Puerto Rico. Not exactly sure why, but I was feeling quite exuberant when an old friend sent me an article about the super rich moving to Puerto Rico for tax purposes.

New inspiration, I reasoned. An infusion of money that could trickle down and jump-start the stagnant economy. Projects funded that might boost services and improve life on the island for everyone. Ten wealthy Americans have already taken advantage of the year-old law here that lets new residents pay no local or U.S. federal taxes on capital gains, and some 40 others are currently considering it. I had heard about the recently-opened Ritz Carlton in Dorado Beach, and its outrageous $2,500 per-night room rate, and about the high-end mall under construction near the University of Puerto Rico, and was pretty certain things were getting better in San Juan, at least economically.

10 things you might not know about India. For many people writing about India, the common cliches of Delhi belly, lengthy traffic jams, bureaucracy, corruption and yoga retreats are the subjects that fill the column inches. Here are 10 other observations. 1. Hardly anyone pays income tax Only 3% of Indians pay income tax, in a population of 1.2bn. One explanation for this is that agriculture is exempt and two-thirds of Indians live in rural areas. The Long Arm of International Law. Thatcher papers reveal Tory party split over Falklands. 22 March 2013Last updated at 11:04 GMT By Bridget Kendall Diplomatic correspondent, BBC News.