Bloody Ivory : Stop Elephant Poaching and Ivory Trade. - killed for their ivory. Elephants are being slaughtered, ivory is on the move, and many elephant populations are in free-fall decline once more. 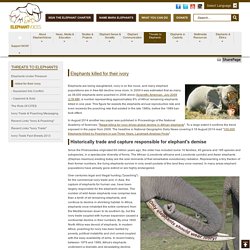 In 2009 it was estimated that as many as 38,000 elephants were poached in 2006 alone (Scientific American, July 2009 (2.59 MB), a number representing approximately 8% of Africa' remaining elephants killed in one year. This figure far exeeds the elephants annual reproductive rate and even exceeds the poaching rate that existed in the late 1980s, before the 1989 ban took effect. In August 2014 another key paper was published in Proceedings of the National Academy of Sciences, "Illegal killing for ivory drives global decline in African elephants". To a large extent it confirms the trend exposed in the paper from 2009. African Wildlife Foundation. Where do elephants live? 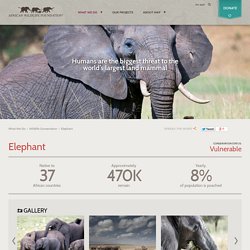 How to Save Africa’s Elephants. Elephants ‘extinct within 12 years’ But these iconic creatures could be lost in little more than a decade due to a poaching bloodbath, an expert claims. 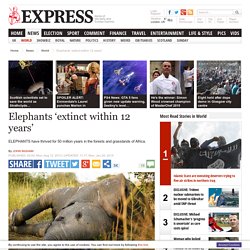 Conservationist Dr Dame Daphne Sheldrick revealed an elephant is being killed every 15 minutes in Africa to supply an insatiable and unsustain-able demand for ivory. From her charity’s base in Nairobi National Park, she said: “Today is World Elephant Day but in 12 years’ time there may not be any elephants left in Africa to celebrate. “A world without elephants is hard to comprehend, but it is a real possibility. Threats to Rhino - Rhino Threats - Save the Rhino. Save The Elephants. Wildlife Trafficking: Beyond Elephants and Ivory. By Susan Lieberman In the wildlife trafficking policy debate in the U.S., the majority of attention to date has been on the ivory and horn of Africa’s elephants and rhinos. 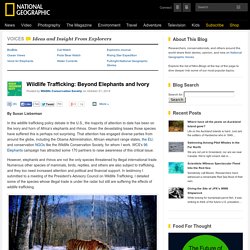 Given the devastating losses those species have suffered this is perhaps not surprising. That attention has engaged diverse parties from around the globe, including the Obama Administration, African elephant range states, the EU, and conservation NGOs like the Wildlife Conservation Society, for whom I work. WCS’s 96 Elephants campaign has attracted some 170 partners to raise awareness of this critical issue.

Wildlife Trafficking – Statistics on the Illegal Wildlife Trade. Statistics released by the United Nation’s’ Convention on International Trade in Endangered Species (CITES) showed that 1,215 rhinos were killed in South Africa in 2014. 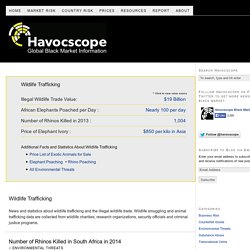 The number of rhinos killed for their rhino horn was a record high. Animal Welfare Institute. The multi-billion dollar trade in wildlife and wildlife parts and products is a crisis that animal species are facing worldwide. 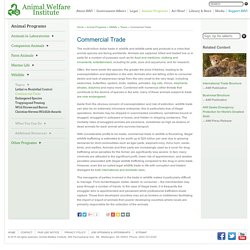 Animals are captured, killed and traded live or in parts for a number of purposes such as for food and medicine; clothing and ornaments; entertainment, including for pets, zoos and aquariums; and for research. Often, the more exotic the species, the greater the price it fetches, leading to its overexploitation and depletion in the wild. Wildlife trade. The international wildlife trade is a serious conservation problem, addressed by the United Nations' Convention on International Trade in Endangered Species of Wild Fauna and Flora (CITES), which currently has 170 member countries called Parties.[1] The 15th Conference of the Parties of CITES was held in Doha, Qatar in March 2010.[2] The trade in wildlife is the third largest illegal business behind only drugs and weapons [3] International wildlife trade can be classified in 2 forms: Illegal trade in wildlife is said to be the second largest illegal trade in volume, second to narcotics and followed by arms and ammunition although there is no hard data supporting this claim and CITES Secretariat has recently even disavowed this statistic. 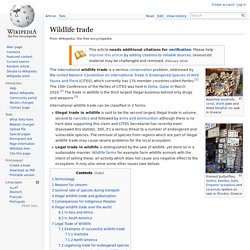 Still, it's a serious threat to a number of endangered and vulnerable species. Terminology[edit] Bloody Ivory : Stop Elephant Poaching and Ivory Trade. Wildlife trade. CITES-and-Elephant-Conservation. Ivory Worship. Thousands of elephants die each year so that their tusks can be carved into religious objects. 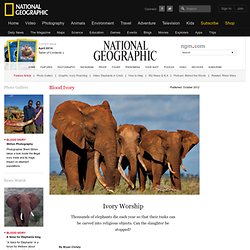 Can the slaughter be stopped? By Bryan Christy Photographs by Brent Stirton IN JANUARY 2012 A HUNDRED RAIDERS ON HORSEBACK CHARGED OUT OF CHAD INTO CAMEROON’S BOUBA NDJIDAH NATIONAL PARK, SLAUGHTERING HUNDREDS OF ELEPHANTS—entire families—in one of the worst concentrated killings since a global ivory trade ban was adopted in 1989. Carrying AK-47s and rocket-propelled grenades, they dispatched the elephants with a military precision reminiscent of a 2006 butchering outside Chad’s Zakouma National Park.

THE PHILIPPINES CONNECTIONIn an overfilled church Monsignor Cristobal Garcia, one of the best known ivory collectors in the Philippines, leads an unusual rite honoring the nation’s most important religious icon, the Santo Niño de Cebu (Holy Child of Cebu). Garcia is a fleshy man with a lazy left eye and bad knees. Some Filipinos believe the Santo Niño de Cebu is Christ himself. “How?” Bloody Ivory : Stop Elephant Poaching and Ivory Trade. Last Thursday’s commemorations of World Wildlife Day in Malawi went ahead but without the planned burning of the country's 4 tonne ivory stockpile. 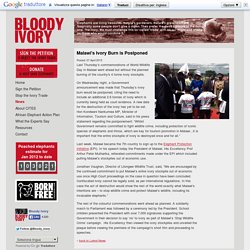 On Wednesday night, a Government announcement was made that Thursday’s ivory burn would be postponed, citing the need to include an additional 2.6 tonnes of ivory which is currently being held as court evidence. A new date for the destruction of the ivory has yet to be set. Hon Kondwani Nankumwa MP, Minister of Information, Tourism and Culture, said in his press statement regarding the postponement: “Whilst Government remains committed to fight wildlife crime, including protection of iconic species of elephants and rhinos, which are key for tourism promotion in Malawi...it is important that the entire stockpile of ivory is destroyed once and for all.” Last week, Malawi became the 7th country to sign up to the Elephant Protection Initiative (EPI). The rest of the colourful commemorations went ahead as planned. Bloody Ivory : Stop Elephant Poaching and Ivory Trade.

Illegal ivory seized in Cameroon Why the ban? 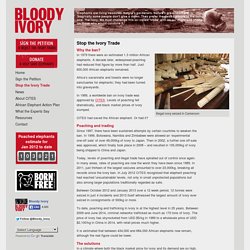 In 1979 there were an estimated 1.3 million African elephants. A decade later, widespread poaching had reduced that figure by more than half. Just 600,000 African elephants remained. Africa’s savannahs and forests were no longer sanctuaries for elephants; they had been turned into graveyards. Effects of poaching on African elephants. The gruesome reality of poaching.Photo by Karl Ammann Poaching caused a decline of African elephants from 1.3 million to 600,000 individuals between 1979-1987. Mortality was unusually concentrated among the largest adults with the biggest tusks. Old matriarchs (the oldest adult females that provide the social glue in elephant herds) were particularly vulnerable. Their tusks are large and their groups were easier to find than solitary adult males.

Many family groups lost their matriarchs, compromising their social, competitive and physiological functioning. Objectives. A Way To Save The Rhino, Just Not Its Horn : The Picture Show. Hide caption Game scouts found this black rhino bull wandering Zimbabwe's Save Valley Conservancy after poachers shot it several times and cut off both its horns. Veterinarians had to euthanize the animal because its shattered shoulder couldn't support its weight. In the past six years, poachers have killed more than 1,000 African rhinos for their horns, many of which are smuggled to Asia for use in traditional medicines. Brent Stirton/National Geographic Hide caption A woman grinds a piece of rhino horn in a Vietnamese cafe.

By adding a little water and rubbing the horn over the dish's sandpaper-like bottom, she creates a solution that many Asians believe is a super-vitamin and a cure for various maladies. Few scientific studies have been conducted on rhino horn's medicinal benefits, and the results have been inconclusive. Hide caption The anesthetized rhino is left to wake up in a field after the dehorning procedure. Asia's Wildlife Trade. For too long in too many countries (including the U.S.), placing the word "wildlife" in front of the word "crime" had diminished its seriousness. U.S. federal prosecutors wanted Anson's conviction to show the world that wildlife smugglers are criminals. In addition to charging him under the American wildlife-trafficking law known as the Lacey Act, they indicted him for conspiracy, felony smuggling, and money laundering. For nearly two years Anson fought extradition to the U.S., but eventually he signed plea agreements, admitting to crimes carrying a maximum penalty of 250 years in prison and a $12.5-million fine.

On June 7, 2001, U.S. District Judge Martin J. If the judge thought a ban on Anson Wong would work, he was mistaken. Numbers Game. Can Elephants Survive a Legal Ivory Trade? Debate Is Shifting Against It. It's one of the more incendiary questions discussed in wildlife conservation circles: Should there be a legal trade in elephant ivory? This debate has been waxing and waning since at least 1989, when the Convention on International Trade in Endangered Species (CITES) voted to "ban" the international trade in ivory after a ferocious wave of poaching in Africa that left hundreds of thousands of elephants butchered. Some conservationists say that a limited legal ivory trade is needed to satiate demand, especially in China, in a controlled manner. Many others argue that the 1989 ban must be kept in place to protect elephants, especially now that poaching has once again risen to catastrophic levels.

One hundred thousand elephants were slaughtered from 2010 through 2012, according to a study published in the August 19 issue of the Proceedings of the National Academy of Sciences. Ethiopia Burns Entire 6.1-Ton Ivory Stockpile. Bloody Ivory : Stop Elephant Poaching and Ivory Trade. Save Tigers Now. Elephant Poachers “Will not Have the Last Word in Kenya” A plume of dark smoke curled over Nairobi National Park in Kenya last week.