How a melancholy egg yolk conquered Japan. Pet Owner Walks His Giant Tortoise Through Streets Of Tokyo. Residents in Tokyo have recently reported several sightings of possibly the most patient pet-walker in the world: an elderly man who takes his enormous African spurred tortoise (or sulcata) out for walks around the town. 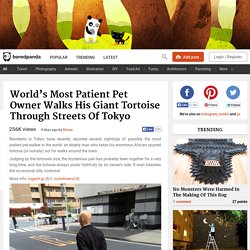 Judging by the tortoise’s size, the mysterious pair has probably been together for a very long time, and the tortoise always plods faithfully by its owner’s side. It even tolerates the occasional silly costume! More info: togech.jp (h/t: rocketnews24) The adorable science behind the “sea bunny” It’s round, and fluffy and has wiggly little ears! 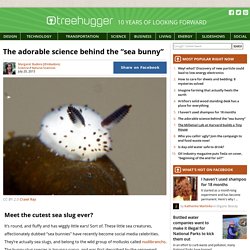 Sort of. These little sea creatures, affectionately dubbed “sea bunnies” have recently become social media celebrities. They’re actually sea slugs, and belong to the wild group of mollusks called nudibranchs. The bunny slug species is Jorunna parva, and was first described by the renowned Japanese marine biologist Kikutaro Baba. The fluffy white sea bunnies are primarily found off the coast of Japan. ダイブストアエグザイル/Video screen capture As for the “ears”—over on Deep Sea News, Dr. Crawl Ray/CC BY 2.0 All nudibranchs are hermaphrodites, which means they produce both sperm and eggs but cannot fertilize themselves. Jorunna parva have a number of different colorings, and are often yellow with black specks and rhinophores. If there wasn’t enough reason to “aawwww” over sea bunnies, the fact that these creatures are incredibly tiny adds extra points to their adorableness score. 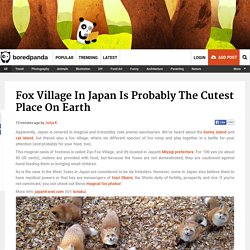 We’ve heard about the bunny island and cat island, but there’s also a fox village, where six different species of fox romp and play together in a battle for your attention (and probably for your food, too). This magical oasis of foxiness is called Zao Fox Village, and it’s located in Japan’s Miyagi prefecture. For 100 yen (or about 85 US cents), visitors are provided with food, but because the foxes are not domesticated, they are cautioned against hand-feeding them or bringing small children.

As is the case in the West, foxes in Japan are considered to be sly tricksters. However, some in Japan also believe them to have mystical powers or that hey are messengers of Inari Okami, the Shinto deity of fertility, prosperity and rice. More info: japantravel.com (h/t: kotaku) Image credits: Souctine Source: fox-info Image credits: Piccolist Image credits: uuaya Image credits: Danny Villeneuve. Hokkaido Island In Japan Is Home To 7 Unique Animals. Hokkaido, the large island at Japan’s northern end, is home to populations of adorable little critters that can’t be found anywhere else in Japan. 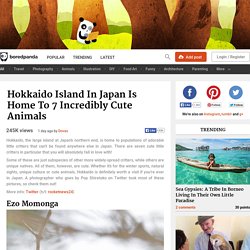 There are seven cute little critters in particular that you will absolutely fall in love with! Some of these are just subspecies of other more widely-spread critters, while others are unique natives. All of them, however, are cute. Whether it’s for the winter sports, natural sights, unique culture or cute animals, Hokkaido is definitely worth a visit if you’re ever in Japan. A photographer who goes by Pop Shiretoko on Twitter took most of these pictures, so check them out! More info: Twitter (h/t: rocketnews24) Ezo Momonga The adorable ezo momonga is a type of flying squirrel unique to Hokkaido. Shima-Enaga The Shima-Enaga is a type of long-tailed tit that lives only in Hokkaido. Hokkaido red fox The Hokkaido red fox is simply a sub-species of the common red fox, but we really love foxes, so we won’t miss the opportunity to post a few more. Iizuna. Look Inside One Of Tokyo’s Owl Cafes.

An owl cafe in Tokyo, Japan, lets its customers spend time with these majestic birds. 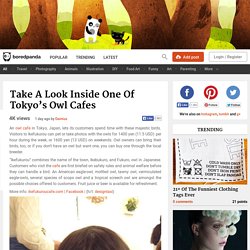 Visitors to Ikefukurou can pet or take photos with the owls for 1400 yen (11.5 USD) per hour during the week, or 1600 yen (13 USD) on weekends. Owl owners can bring their birds, too, or if you don’t have an owl but want one, you can buy one through the local breeder. “Ikefukurou” combines the name of the town, Ikebukuro, and Fukuro, owl in Japanese. Customers who visit the cafe are first briefed on safety rules and animal welfare before they can handle a bird.