George Orwell. George Orwell [pseudonym of Eric Arthur Blair] (1903-1950), journalist, political author and novelist wrote Animal Farm (1945) and Nineteen Eighty-Four (1949); “It was one of those pictures which are so contrived that the eyes follow you about when you move. 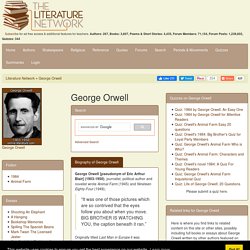 BIG BROTHER IS WATCHING YOU, the caption beneath it ran.” Originally titled Last Man in Europe it was renamed Nineteen Eighty-Four for unknown reasons, possibly a mere reversal of the last two digits of the year it was written. It was first met with conflicting criticisms and acclaim; some reviewers disliked its dystopian satire of totalitarian regimes, nationalism, the class system, bureaucracy, and world leaders’ power struggles, while others panned it as nihilistic prophesy on the downfall of humankind. Some still see it as anti-Catholic with Big Brother replacing God and church. “First I spent five years in an unsuitable profession (the Indian Imperial Police, in Burma), and then I underwent poverty and the sense of failure. George Orwell. English author and journalist Eric Arthur Blair (25 June 1903 – 21 January 1950),[1] better known by his pen name George Orwell, was an English novelist, essayist, journalist and critic, whose work is marked by lucid prose, awareness of social injustice, opposition to totalitarianism, and outspoken support of democratic socialism.[2][3] Life Early years Blair family home at Shiplake, Oxfordshire Eric Arthur Blair was born on 25 June 1903 in Motihari, Bihar, British India.[7] His great-grandfather, Charles Blair, was a wealthy country gentleman in Dorset who married Lady Mary Fane, daughter of the Earl of Westmorland, and had income as an absentee landlord of plantations in Jamaica.[8] His grandfather, Thomas Richard Arthur Blair, was a clergyman.[9] Although the gentility passed down the generations, the prosperity did not; Eric Blair described his family as "lower-upper-middle class".[10] In 1904 Ida Blair settled with her children at Henley-on-Thames in Oxfordshire. 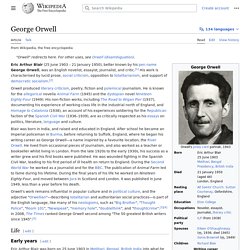 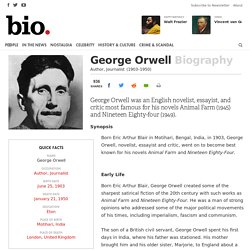 Synopsis Born Eric Arthur Blair in Motihari, Bengal, India, in 1903, George Orwell, novelist, essayist and critic, went on to become best known for his novels Animal Farm and Nineteen Eighty-Four. Early Life Born Eric Arthur Blair, George Orwell created some of the sharpest satirical fiction of the 20th century with such works as Animal Farm and Nineteen Eighty-Four. He was a man of strong opinions who addressed some of the major political movements of his times, including imperialism, fascism and communism. The son of a British civil servant, George Orwell spent his first days in India, where his father was stationed. According to one biography, Orwell's first word was "beastly. " Like many other boys in England, Orwell was sent to boarding school. After completing his schooling at Eton, Orwell found himself at a dead end. Early Career Personal Life.

Animal Farm Themes. Animal Farm is a satire of totalitarian governments in their many guises. 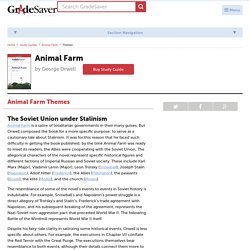 But Orwell composed the book for a more specific purpose: to serve as a cautionary tale about Stalinism. It was for this reason that he faced such difficulty in getting the book published; by the time Animal Farm was ready to meet its readers, the Allies were cooperating with the Soviet Union. The allegorical characters of the novel represent specific historical figures and different factions of Imperial Russian and Soviet society. These include Karl Marx (Major), Vladimir Lenin (Major), Leon Trotsky (Snowball), Joseph Stalin (Napoleon), Adolf Hitler (Frederick), the Allies (Pilkington), the peasants (Boxer), the elite (Mollie), and the church (Moses). The resemblance of some of the novel’s events to events in Soviet history is indubitable. Despite his fairy-tale clarity in satirizing some historical events, Orwell is less specific about others.

By the original SparkNotes editors. What is the main theme in Animal Farm by George Orwell? The weakness of all Utopias is this, that they take the greatest difficulty of man and assume it to be overcome, and then give an elaborate account of the overcoming of the smaller ones. 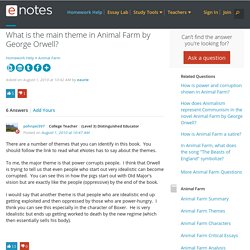 C. K. Chesterton, Heretics I think the above quote states pretty accurately what Orwell had in mind. Changing institutions does not change human nature, which is "the greatest difficulty of man. " B. Please refer to the links below. Animal Farm: Major Themes. Satire Satire is loosely defined as art that ridicules a specific topic in order to provoke readers into changing their opinion of it. 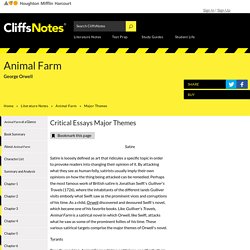 By attacking what they see as human folly, satirists usually imply their own opinions on how the thing being attacked can be remedied. Perhaps the most famous work of British satire is Jonathan Swift's Gulliver's Travels (1726), where the inhabitants of the different lands Gulliver visits embody what Swift saw as the prominent vices and corruptions of his time. 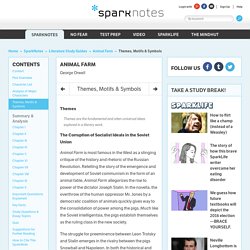 The Corruption of Socialist Ideals in the Soviet Union.